An additional 250 vehicles that have been stranded in underground parking structures at UCLA should be available for pick up this weekend, campus officials said Friday.

Owners will receive emailed instructions on when and how to retrieve their vehicles in Parking Lot 36, located at Kinross Drive and Veteran Avenue in Westwood Village. The lot will be open from 8 a.m. to 7 p.m. on both Saturday and Sunday for those told their vehicles are ready.

This latest batch of relocated vehicles, which were spared the worst effects of the deluge resulting from the Tuesday afternoon water main break on Sunset Boulevard, includes cars and trucks that had been parked on the upper levels of parking structures 4 and 7. These vehicles join nearly 400 that were already removed from structure 4, starting Thursday evening, by a caravan of tow trucks and flatbeds.

Another roughly 300 cars and trucks remain stuck in the lower levels of the parking structures where flood waters submerged some vehicles. Owners of those vehicles will be notified by UCLA Transportation when more is known about their status. In the meantime, those vehicle owners are encouraged to speed up the process by filing claims with the Los Angeles Department of Water and Power.

All standing water is expected to be pumped out of the lowest parts of the structures by Saturday morning. UCLA Transportation officials said that crews were continuing to work as quickly as safety allows. Both parking structures remain closed to the public.

In other developments on Friday:

On Friday morning the first reunions occurred between elated owners and their recently freed vehicles. Anay Rodriguez, who works in alumni relations at the UCLA Anderson Graduate School of Management, was relieved to discover her purse and other belongings were still in her car. “I think it was good that they blocked everything off, even though I wasn’t able to get my ID and other stuff out of my car,” she said. “Actually, I think that UCLA handled it really well because it could have been far worse.”

As Rodriguez got behind the wheel, all smiles, her friend and carpool buddy Terrenz Vong, also a staff member at UCLA Anderson, captured her friend’s happiness on a video. “She was just so excited to get her car back,” said Vong, who has been driving her friend to and from work since the flooding. 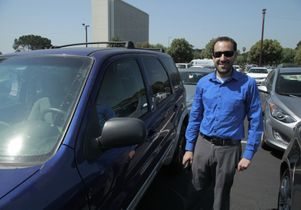 Employees from UCLA Transportation staffed a tent in Lot 36 where vehicle owners could claim their cars once their IDs were checked. As drivers were escorted to their vehicles, tow trucks were still bringing in cars. The vehicles had been delivered at a rate of about 20 per hour since last night.

Ricardo Marin, a program analyst at UCLA Anderson, was one of many faculty and staff from the school to park in the underground structures that were flooded. Marin was one of the lucky ones who parked in an upper section where the cars suffered no water intrusion. He said he appreciated how UCLA kept him updated with emails.

“I just knew it was going to take a little time,” said Marin, who was picking up his 2002 Honda. “Once you realize that, you can be a little bit more patient. And I really get why they are doing it this way because you never know what the damage is. You don’t want to put anybody at risk.”

Jose Leon, an adviser at the campus Community Programs Office who picked up his car, said he felt badly for colleagues and some of his close friends who have lost their cars. “But I’m glad that I do have my vehicle back," he said, "and I will probably be helping a few people get to work because they don’t have their vehicles so I am really appreciative of this.”

He added, “Transportation did a great job sending out forms and multiple emails every step of the way. Even today, they sent me an email about this process. So I am really happy about that.”

For Stacey Tate, coordinator at the UCLA Events Office, it was a happy ending to an anxious wait when she spotted her car, looking shiny and clean.

“I was very concerned, not really knowing if it was actually damaged,” Tate said. “But it looks great.”