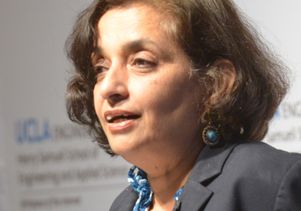 Jayathi Murthy, the new dean of the UCLA Henry Samueli School of Engineering and Applied Science, has proposed a major expansion plan aimed at strengthening the school and preparing more students to power the innovation and technology economy.

Murthy, who became dean on Jan. 1, said she intends to increase the student roster by 1,000 and add 50 full-time faculty over the next several years. The school currently enrolls just over 5,000 students and has about 175 full-time faculty.

At a Jan. 19 reception for students, faculty and friends of the school, she also described her vision for engaging with community colleges and high schools to increase and diversify the pipeline of California students qualified to attend UCLA Engineering, growing the school’s research enterprise and expanding the use of online education and new teaching tools. UCLA leaders have backed the plan.

“This is a transformative time in engineering education,” she said to an audience of more than 200 at the California NanoSystems Institute auditorium. “Radical advances in technology are changing what we teach, the way we teach it and to whom we teach it.”

Freshman applications to UCLA Engineering have nearly doubled since 2011. For the 2015–16 academic year, the school received nearly 22,000 applications for freshman admission and enrolled 740, a ratio of nearly 30 to 1.

“California is a rich and vibrant state,” she said. “It is the central driver of our country’s innovation economy. There is a need for excellence and room for growth.”

Scott Waugh, UCLA’s executive vice chancellor and provost, introduced Murthy. He expressed confidence that she would lead the school to new heights and praised her predecessor, Vijay Dhir, for placing the school on its successful trajectory. A new building, Engineering VI, with state-of-the-art labs and teaching facilities, is under construction and scheduled to be completed in 2017.

Murthy, who was previously chair of the mechanical engineering department at the University of Texas at Austin, closed her remarks by emphasizing the “soft power” of education to transform lives.

“In engaging our students every day, in allowing ourselves to be challenged and questioned in class, we teach not only engineering, but the very habits of democracy and open debate,” she said. “And we teach this not only to our own citizens, but to students from all over the world. As an immigrant who came here as a student, I can tell you how powerful an influence that has been.”