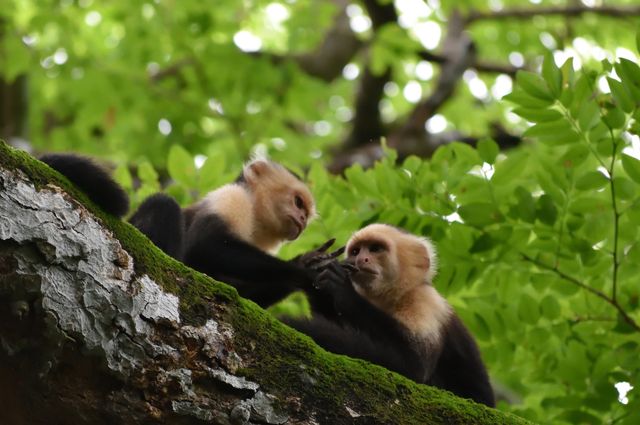 Kathryn Perry
Not all new behaviors catch on, but UCLA scientists saw the practice of inserting a finger in a friend’s nostril spread to other monkeys in one group.

One white-faced capuchin monkey sticks its fingers deep into the eye sockets of another capuchin it’s friends with. A capuchin uses her ally’s body parts to whack their common enemy. These behaviors become entrenched in the repertoires of the inventors. But in the first case, the behavior spreads to other group members, and in the second case it does not.

What makes capuchins invent new behaviors, and what causes some behaviors, but not others, to persist and be adopted by other monkeys?

A study led by UCLA professor of anthropology Susan Perry reveals that older, sociable capuchins are prone to inventing more new types of social behaviors, many of which seem to function either as tests of friendship or displays against enemies. Other behaviors the researchers observed involved games, new ways to interact with infants and novel forms of sexual interaction.

“Capuchins have intricate societal structures, long-term, kin-based relations in both sexes and a rich behavioral repertoire, making them an intriguing subject of scientific observation,” Perry said. “Learning about the minutiae of other, nonhuman primate societies reminds us that we are not the only species on this planet that has emotions, personalities, friends, enemies, politics, culture and social drama.”

The findings about behavioral innovations, which were published in Proceedings of the National Academy of Sciences, would not have been possible without Perry’s 27-year practice studying primates at the Lomas Barbudal Monkey Project near Liberia, Costa Rica.

Perry’s research teams have been collecting data year-round in the tropical dry forest, tracking the daily lives of 234 individually recognized capuchins in 10 social groups by recording about 250 species-typical behaviors. The researchers turned each new observed behavior into a data point for statistical modeling. Their data for the PNAS study was derived from 10 years of research.

“In 2001, I added to the core data collection protocol the practice of recording detailed descriptions of any behavior that had not previously been seen,” Perry said.

Using the protocol meant she could figure out what behaviors were new, when — or if — they spread throughout the group, and which capuchins were responsible for sharing them.

A capuchin monkey presses a companion’s finger into its own eye socket, a behavior that caught on among others in the group.

Although the study found that older monkeys are better at inventing social-interaction behaviors, Perry also observed that younger monkeys innovate behavior in different categories — ways to interact with the physical environment (such as flipping over cow pies to use as see-saws), get food (wrapping caterpillars in leaves to rub off the stinging hairs, for example) or interact with their own bodies (including by using twigs and vines as dental floss).

Because true innovation is rare, using the protocol helped standardize note-taking across her teams and mitigate some natural observer bias, she said. Given her decades of experience observing the capuchins in Costa Rica, Perry was the team’s arbiter for what behavior could be considered “new.”

“This is possibly the best data set on innovation rates in a primate in a natural context,” Perry said. “It shows the different behavioral domains in which these animals innovate because we are not just doing experiments based on a particular experimenter-defined task; we are writing down every crazy thing these animals do and then also watching whether those things stay in the repertoire.”

Behaviors were sorted into four categories: social, foraging, self-directed and investigative. The researchers ultimately tracked 187 innovations, 127 of which were unique behaviors. Eighty percent were one-off actions never repeated by the originating monkey or transmitted to others. Most of the innovations were in the investigative category (42.5 percent), followed by social (37 percent), foraging (13.4 percent) and self-directed (7.1 percent). 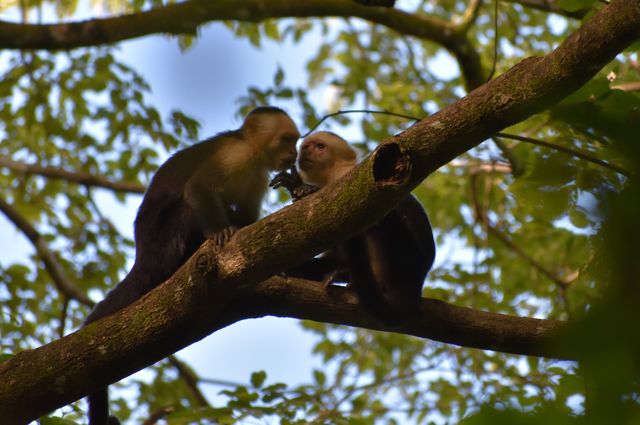 Kathryn Perry
A capuchin monkey sticks its hand in the mouth of another.

Some “really kooky things” turned up, Perry said. One monkey launched an infant into the air by the tail and juggled it; another performed similar behaviors with a squirrel carcass, throwing it from hand to foot repeatedly. But neither trait caught on with other monkeys. In another instance, one monkey took another monkey’s hand and used it to scratch its own head. Some monkeys decided to groom animals from species, including porcupines, anteaters and howling monkeys. Several devised various forms of playing with sand, like burying body parts or tossing sand between their legs.

Another new study, published in the Proceedings of the Royal Society of Biological Science, was led by Brendan Barrett, a UC Davis graduate student who Perry advised for several years. Barrett documented how a group of capuchins figured out how to open the fruit of the Panama tree. The fruit was was new to most of members of the group, which had split off from a larger monkey group more than a decade ago and moved to an area without Panama trees.

A mix of learning techniques, both social and nonsocial, spread throughout the group as they gained experience with the task. Some of the older animals were familiar with the fruit — which contains seeds protected by a hard shell lined on the inside with prickly hairs — and some were not. Barrett surreptitiously introduced the fruits to the new area two at a time, so that the researchers could document each instance in which the monkeys interacted with them.

The researchers found that most monkeys adopted the most efficient technique for opening the fruit, even though Napoleon, the monkey that developed the technique, was not a high-ranking member of the group.

“It will be interesting to do similar studies in similar societies and see if this is fairly standard,” Perry said. “It does make more sense for monkeys to have a payoff bias rather than a prestige bias in a foraging task for which there is a clear efficiency advantage. But there might be other behavioral domains where you would expect different types of social learning biases.”

Studying behavioral innovation is important because cultural change primarily occurs when new activities are introduced and then picked up by more members of the community.

And the research provides an important link to the natural world for an increasingly technology-obsessed human culture, Perry said. “This is really eye-opening to people who naturally assume that we are the only species capable of such things, and it makes people empathize more with other species.”