UCLA has launched “We, the Optimists,” a new iteration of the university’s highly successful, national Optimists brand campaign. The marketing effort spotlights UCLA’s role as an engine of opportunity and progress, propelling action and change in Los Angeles and around the world.

The Optimists campaign, which launched in 2012, initially focused on the accomplishments of UCLA icons who were trailblazers in their fields, from Jackie Robinson and Ralph Bunche to John Wooden and Francis Ford Coppola. It has highlighted the institution’s world-class breadth and depth and the diversity of UCLA’s campus community, which mirrors the dynamic, multicultural metropolis of Los Angeles. The new iteration of the brand campaign will run for one year and is centered on the present, telling compelling stories of people and programs from downtown Los Angeles to Southeast Asia to the far reaches of the solar system.

The new effort celebrates the transformative power of optimism, which in the context of the campaign means a relentless drive to excel, a refusal to accept the status quo and the belief that anything is possible. Leveraging UCLA’s role as a public university serving its community, We, the Optimists looks beyond the campus’s borders and invites people who are driven to live a life that matters to come together as a community of optimists.

Carrying the theme forward on each element of the campaign are headlines that begin with “We” and end with an “optimism” — a verb that expresses the action or area represented in the ad. For example, “We Restore” highlights a program in which UCLA health care professionals perform reconstructive surgery on veterans who were disfigured on the battlefield and in training; “We Respond” features a student-run street clinic that helps the homeless and those most in need on the Westside of Los Angeles; and “We Solve” describes an audacious project that unites dozens of UCLA’s top researchers with community leaders and policymakers to make the Los Angeles region completely energy- and water-independent by 2050.

“The We, the Optimists campaign is not just about the future of UCLA, but Los Angeles and far beyond. As a premier public university, we have a responsibility to maintain a world-class research and education enterprise. That means deepening our relationships not only with those in our own family, but building broader connections in our community,” said Rhea Turteltaub, UCLA’s vice chancellor for external affairs. “Service is an integral part of UCLA’s mission and we hope that, through this phase of our campaign, more people will understand the vital role our university plays in public life. UCLA has never been just about us. It’s always about we.” 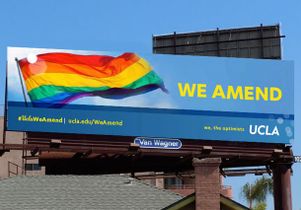 We, the Optimists ads appear today on broadcast and cable television, in newspapers and magazines, and on radio, billboards and bus wraps across Southern California. The campaign includes print advertising in The Wall Street Journal, Los Angeles Times, The New York Times, The Orange County Register, Fast Company, Variety and The Hollywood Reporter.

A 30-second ad will appear during the telecast of tonight’s football game between UCLA and Arizona State University and during subsequent UCLA sporting events. (Like other universities, UCLA receives TV and radio air time for free during telecasts of intercollegiate sporting events through the NCAA.)

We, the Optimists is also being supported by an expanded presence on websites, search engines and out-of-home platforms.