Representatives from state government, UCLA faculty and environmental activists from around the country identified ways in which California can continue to lead on climate policy at a time when the federal government is retreating from ambitious environmental goals. The event, “State Climate Policy in the Trump Era: California and Beyond,” drew more than 140 people from around the country to UCLA Law.

UCLA Law’s Emmett Institute on Climate Change and the Environment hosted the May 22 symposium. Speakers dug deep into the existing policy framework and pioneering strategies that environmental activists and lawmakers may use to counterbalance the Trump administration’s movement to roll back and reverse climate policy. More directly, panelists focused on ways in which California can continue to lead the charge via legislative and regulatory innovations at the state and local level.

“We’re at a point where we really need to transform the way we live in order to deal with climate change,” said Alice Reynolds, senior advisor on climate, the environment and energy to California Gov. Jerry Brown.

Reynolds also raised the notion, echoed by many speakers, that climate policy is a civil rights matter, because people in rural areas and poorer urban neighborhoods are often the most adversely affected by pollution and other environmental dangers. “If we don’t act quickly, we’re going to lose the ability to target our programs to benefit low-income communities,” she said. 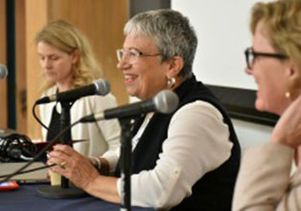 Carlson moderated the program’s featured conversation between Reynolds and California Air Resources Board Chair Mary Nichols, an Emmett Institute board member who has been one of the nation’s most prominent environmental activists for more than four decades. Often called the “queen of green,” Nichols zeroed in on troubling impediments to collaboration between the federal Environmental Protection Agency under administrator Scott Pruitt and progressive state actors. Such a partnership, she said, has traditionally been key to effecting positive change.

“The proposed budget for the EPA is horrific,” Nichols said, referring to President Trump’s proposal to reduce the EPA budget by 31 percent. “It is insulting. It is clearly intended to indicate a lack of regard for the agency and what it does, and a wholesale … approach to making it smaller and making it less important or less effective. I don’t think it will stand.”

Nevertheless, Nichols added, this places a special burden on California to provide leadership, as it often has in reducing auto emissions, developing renewable sources of energy and studying the impacts of climate change, among others. “I think we have already good reason to be quite optimistic,” she said, “that the types of policies that California has pursued in the past will continue to be effective.”

This story is posted on the UCLA School of Law website.