Less than a year ago, Emily Gordon was a junior biochemistry major at UCLA aiming to become a lab researcher. Now, she’s being scouted to compete in the 2016 Olympics as a marathon runner.

That’s an exceedingly fast-paced career change for anyone, but it’s supersonic speed for an athlete who ran her first marathon less than a year ago. How did her life suddenly change tracks?

Gordon, 21, recalled that she has always been athletic. She was gymnast for 9 years growing up and ran cross-country and track for all four years in high school.

But it wasn’t until Oct. 21, 2013, that she decided to run her first marathon. At UCLA, she joined the triathlon team — an athletic student club on campus — and a group of her friends from the team decided to run in the Nike Women’s Marathon in San Francisco. 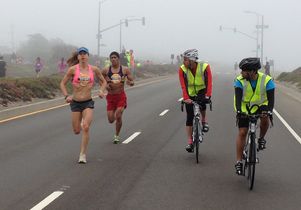 Courtesy of Emily Gordon
Gordon has decided to train hard for the Olympics while also starting her career in a research lab after graduating from UCLA.

Gordon had no lofty goals for her performance in the marathon — she just wanted to finish and enjoy the journey.

“I didn’t want to think about the finish line,” Gordon said. “It wasn’t a race for me. It was enjoying every mile and making sure to look around and be a part of the crowd and smile.”

But Gordon ran the marathon much faster than she intended and surprised herself as well as some coaches. She finished in first place in just 2 hours and 51 minutes. (Consider that the record for the fastest marathon run by a woman was set in 2003 at 2 hours and 15 minutes). At this point, not only had Gordon never raced a marathon before — she had never trained for a marathon.

“I got into the green room before the awards, and Joan Benoit (a Team USA marathon legend who won gold in the 1984 Summer Olympics in Los Angeles) was the person giving out the awards,” said Gordon. “She said, ‘Hey, you should really think about qualifying for the Olympic trials. You could really do it if you just put a little work in.’”

That’s exactly what Gordon did — with a vengeance.

The Olympic trials, as it turns out, will be held in Los Angeles on Feb. 13, 2016, which gives her around 18 months to train. To get into the trials, a runner must achieve a time of 2:43.00, called the "B-standard." To receive funding from USOC (U.S. Olympic Committee), a runner must achieve the A-standard time of 2:37.00. Gordon ran her second marathon in Huntington Beach in February and got a time of 2 hours and 39 minutes. It qualified her for the B Level Olympic Trials.

“I took a very different approach to [my second marathon],” said Gordon. “I had a goal, and times I wanted to run for every mile, pacing and everything.”

Embracing new opportunities that have come her way, Gordon decided to spend this summer away from the lab and instead travel the country visiting different marathon training facilities. She ultimately joined a team in Minnesota called Team USA Minnesota. Gordon has one more quarter left at UCLA. When she’s finished and has her degree, she plans to head out to train in Minnesota where she’ll be running 60-80 miles per week.

“Right now I run 55-60 miles a week, which is really, really low mileage for a marathoner,” Gordon said. “Because I am so new, my coach wants to slowly and carefully increase my weekly mileage. If I increase too quickly, it leaves me at high risk for injury. It’s a really tricky art to figure out how to increase mileage safely and get the most out of the miles that I am able to put in.”

On the Minnesota team, athletes receive a stipend to help pay for room and board, but they’re still required to get a part-time job, which fit perfectly into Gordon’s plans to start her career. She hopes to get a job in a biochemistry lab at the University of Minnesota or in a development lab at the General Mills headquarters.

“I know I want to continue [doing research],” Gordon said. “I’m really passionate about it, but I went to my dad and he said, ‘I want you just to run. It’s an ability you won’t have for your whole life.’ I can work later on in my life, but I can only run for a certain amount of time.”

Though that is true, Gordon said, runners tend to have longer careers than athletes who play other sports. Runners tend to really hit their stride in their early 30s.

“I’m pretty hopeful, with the way things are going,” said Gordon. “My new coach is really excited about my potential because I am so young.”

When asked if she was overwhelmed by her whirlwind series of unexpected athletic successes, Gordon said she’s just taking every day one step at a time.

“This is a huge surprise,” she said. “So even just being in contention to go to the Olympics is already an honor. Even though I’m young and I still have 10-plus more years of doing this, as long as I stay healthy, it’s just going to be exciting. It’s nice to know that my hard work is paying off too.”