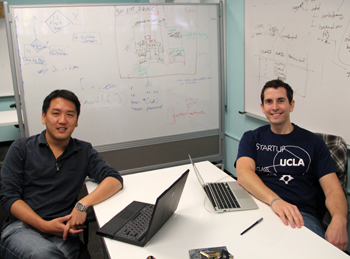 Daniel Lim was working for a company in South Korea that helped affluent families get their kids into American colleges when he was struck by the injustice of it all: “This was not terribly fair to other students who wanted these services but weren’t in that financially and socially elite group,” he recalled, “but there was not much I could do about it at that point.”

That was before Lim, who has an engineering degree from Yale, came to UCLA, earned a master’s degree in statistics and entered the Ph.D. program in political science, where he’s researching how immigrants’ backgrounds affect their political acculturation. And before he teamed up with fellow political science doctoral student Steve Palley — who has a background in mobile game development — to create a free online tool to help high school students, regardless of their socioeconomic status, get a solid start on applying to college. Lim and Palley went live with a fully usable beta version of ApplyMap.com earlier this month — just six months after teaming up.

They credit their fast launch largely to Startup UCLA. Now in its second year, the program aims to turn UCLA students with inventive ideas into entrepreneurs with viable businesses. It receives funding from the Division of Social Sciences in UCLA’s College of Letters and Science, the UCLA Anderson School of Management, the Office of the Vice Chancellor for Research and a number of private donors. Entrepreneur magazine recently included the program in the story, “Top campus-based resources for aspiring college entrepreneurs.”

“The intellectual side of education is very important, but Startup UCLA prepares them further for the world after they graduate,” said Alessandro Duranti, Dean of the Division of Social Sciences. “They get a sense of what it means to transform an idea into something that can give them financial support.”

Lim and Palley, and nine other student teams, worked virtually nonstop during the 10-week summer program. Also participating this year was UCLA Anderson School of Management alumna Pallavi Patil, who created VineLust, an online service that employs computer algorithms and professional sommeliers to match fine wines from around the world with the tastes of individual VineLust members. And Smartest K12.com, developed by another Anderson School student group and soon to be tested in schools in New Orleans, helps teachers individualize classroom teaching by organizing and analyzing data on homework, test scores and more. 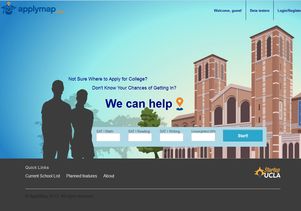 ApplyMap's homepage currently features a depiction of Royce Hall in UCLA's honor, said Lim and Palley.
“Startup UCLA helped us tremendously in every way,” said Palley. The program provided resources like a full calendar of presentations and consultations with business professionals who specialize in startups, from attorneys to venture capitalists. Successful entrepreneurs also share their stories in a series dubbed “How I Did It.”

Most valuable, said Palley, was the program’s unrelenting emphasis on having teams “figure out what your business is and how you can make money with it … and how you explain it and sell it to people.”

Palley and Lim want to help high school students narrow down which of the thousands of colleges and universities in the United States would be the best matches and hence, the schools they should apply to. While many students get help from college counselors at their schools, “the average high school student gets less than 40 minutes of counseling on college,” said Palley. “And there are a lot of zeros in that average, a lot of students in this country who don’t have college guidance counselors anymore, especially in public schools.”

The partners also took a close look at potential online competitors which seem to offer the same service but, Lim said, actually don’t.

“Those sites are essentially high-tech phone books,” Lim said. “You can search them for criteria like ‘I want schools that have a certain major and give this financial aid’ and maybe you’ll get a list of 100 schools. But it’s up to you to basically connect the dots and try to figure out which of those schools you want to apply to. It’s terribly inefficient.”

He and Palley have improved upon this by applying the statistical methods they use in their political science doctoral research. They pulled in computer programmers to help write software to their specifications.

ApplyMap users can search colleges using criteria ranging from grade-point averages to preferences like student diversity and access to outdoor activities. The software also has users rank their preferences — what’s more important to you: student diversity or outdoor activities? — to further refine the search. A “deal-breaker” feature lets them toss out any college that, for instance, doesn’t have a student newspaper. The resulting list of colleges shows students their chances of actually getting in, from “reach” to “super-safety” schools. In the near future, ApplyMap will also generate a list of due dates for applications and essays, along with links for more information and even Google street views of each campus.

The partners are actively promoting ApplyMap to college counselors and asking them to tell students about it. Their hope is that users will give them feedback “to help us refine the product before we shift into full marketing mode next summer,” said Palley.

They’re also preparing to make pitches to potential investors. They have already had some practice in this: In September, all of the teams raised money through crowdfunding and traveled to the Bay Area to pitch three venture capital firms. They also presented their products to the UCLA community and guests at demo events held at the California NanoSystems Institute.

Palley and Lim are still strategizing how ApplyMap might generate income — one possibility, adding premium features for a fee.

“But there will always be an all-free version,” Palley asserted. “One of our main motivations is to attempt to redress the gap between the haves and the have-nots in terms of college outcomes and college planning, which is growing. We want to reach people like first-generation students and those from disadvantaged areas — people who really have no advice and no resources.”