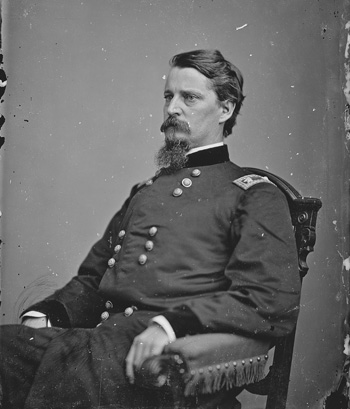 In a typical high school history textbook, this is what you’ll read about Gettysburg: The battle took place outside a small town in southern Pennsylvania and claimed more than 50,000 casualties. The Confederate forces, under General Robert E. Lee, suffered heavy casualties at the hands of the Union Army, and these losses prevented the Confederacy from ever again threatening the North with a major offensive.

Not surprisingly, textbooks make no mention of Los Angeles. Gettysburg is nearly 2,300 miles away from here. In fact, no Civil War combat occurred in California at all; the fighting between the North and South never made it farther west than Arizona.

But a little known fact is that Los Angeles does have a connection to the Battle of Gettysburg, which is being commemorated July 1-3 on its 150th anniversary. Union Army General Winfield Scott Hancock, who played a key role in stopping Confederate attacks on Union forces during the battle, including the famous Pickett’s Charge, had an important role in Los Angeles at the beginning of the Civil War, said Daniel Lynch, a Ph.D. candidate in the UCLA history department.

“I grew up in Southern California and was taught that history was something that happened somewhere else,” said Lynch, whose dissertation theme is the 19th-century convergence of Southerners and Californios in Southern California. “Why nothing was made of the area’s Civil War-era history is beyond me since the connections were right there waiting to be noticed.”

Under the guidance of his adviser, history professor Stephen Aron, Lynch has spent the last four years at archives such as the Huntington Library in San Marino, the Seaver Center for Western History Research located in the L.A. County Museum of Natural History, Bancroft Library at UC Berkeley and the California State Library in Sacramento digging through rare books, old newspapers and personal papers to uncover the rich, largely unknown history of the region during this period.

At the outbreak of the Civil War in 1861, Hancock served as the U.S. Army’s quartermaster for the Southern District of California. He was stationed in a small Los Angeles office on Main Street near Third Street. This was not the site of Drum Barracks, the major Southern California Civil War base that was built after Hancock had left Los Angeles for eastern battlefields. Drum Barracks, a remnant of which still stands in Wilmington, served as a coastal receiving station for supplies and troops as well as the departure point for troops going east to confront Confederates in Arizona. Hancock’s storehouse served some of those same functions, but on a smaller scale.

As quartermaster, Hancock obtained munitions and other supplies for regional forces engaged primarily in Indian-fighting before the Civil War, Lynch said. He held this post from May 1859 until August 1861, about four months after the Civil War started.

Hancock’s role, though, went beyond logistics. Although L.A. was an important trade hub, it was a small but extremely volatile town of about 5,000 people. And Hancock, for a time, was the only officer charged with protecting the military storehouse. 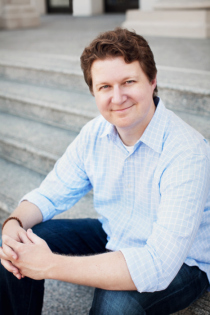 UCLA history Ph.D. candidate Daniel Lynch is writing his dissertation about the 19th-century convergence of Southerners and Californios in Southern California.

“L.A. was small — a cow-town, really, back then, and was known for periodic mob justice and daily violence,” Lynch said. Worried that there might be a raid on his military storehouse by secessionist rebels, Hancock wrote to his superiors in San Francisco requesting reinforcements.

There was a legitimate reason to worry about Southern California’s loyalty. In 1859, a supermajority of voters from Southern California counties had voted to secede from the state and form the potentially pro-slavery Territory of Colorado, Lynch said. The state government approved the scheme, but the federal government had final authority and never did. In 1860, the southern Democratic presidential candidate John C. Breckinridge received the most votes in Los Angeles.

The demographics of the region were also a cause for concern. The migrants who settled in Southern California in the 1840s and 1850s came disproportionately from frontier slave states such as Texas, Missouri and Arkansas, Lynch said. Californios, the Spanish-speaking people of Mexican California whose insurgency during the Mexican American War had temporarily knocked the American invaders back on their heels, remained a relatively large share of the population.

Members of these two groups had forged a political alliance. The Southern-born politician Joseph Lancaster Brent and the Californio politician and large-scale cattle rancher Andres Pico had aligned under the banner of the “Chivalry,” a pro-Southern, pro-slavery wing of the state Democratic Party. Lynch found Spanish-language Chivalry propaganda that linked the history of California Missions to the slave South to appeal to local Latinos. According to this propaganda, the Mission Indians were “happy, sober and industrious under the care of the venerable Fathers of Saint Francis.” After the mission system was shut down, the Indians returned to the state of an “animal, working just enough to get liquor to get drunk.” This is what the Republicans “want to do with the Negro,” claimed the pro-Chivalry Californio who authored the piece, remove him from the “state where he is happy and useful to man and degrade him as the Indians of California!”

While elite Californios and their Southern allies may have sympathized with the South, they concluded that a Southern California revolt was not worth risking their status as local powerbrokers, Lynch said. As Hancock reported to his superior officer in San Francisco, “the leaders in politics among those who have sympathies antagonistic to the Government, and the principal citizens, do not wish to see force used (they are men of property), and oppose carrying matters to extremes.”

Nevertheless, Hancock still feared that a rebellion might erupt anyway, driven not only by pro-Southern enthusiasts but by local Latinos as well. As he explained in the same message, “when once a revolution commences the masses of the native population will act, and they are worthy of a good deal of consideration. If they act it will be most likely against the government.”

Though Pennsylvania-born and adamantly pro-Union, Hancock privately sympathized with Southerners on the slavery question. On the night several recently resigned officers — General Albert Sidney Johnson, Major Lewis Armistead and a few others — were to leave Los Angeles to join the Confederacy, they had dinner with Hancock and his wife, Almira, who described the evening in her book, “Reminiscences of Winfield Scott Hancock.” 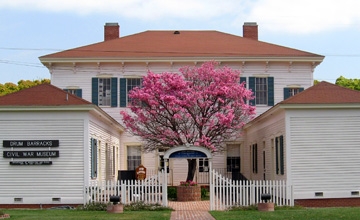 The Drum Barracks Civil War Museum in Wilmington is housed in a restored wooden building that is the only structure remaining of the 22 that were built as a military post during the Civil War.

“From an official standpoint, Hancock should have been trying to stop this exodus, since the men were clearly leaving to join the rebellion,” said Lynch, but he didn’t. As Almira wrote, “All were endeavouring to conceal, under smiling exteriors, hearts that were filled with sadness over the sundering of life-long ties, and doubts as to result of their sacrifice.’”

In a turn of events that no one that night could have foreseen, Armistead died in Pickett’s Charge at Gettysburg, which Hancock helped beat back. If Almira’s account is to be believed, Lynch said, two other unnamed dinner guests died in that same fight.

Shortly after the fateful dinner party, Hancock received word that he was to serve as chief quartermaster for an Ohio unit. He had combat experience as an officer during the Mexican American War, however, and would eventually find himself leading men into battle again, most famously at Gettysburg.

Lynch said that he wishes he had known about these historical highlights as a high school student and, later, a teacher in San Gabriel. But the good news is that scholars across the country are now recognizing links between the Civil War and the West.

“Once this new scholarship finds its way to schools, teachers throughout the West will hopefully feel more empowered to make local connections to the Civil War,” said Lynch, who is assisting Autry National Center curator Carolyn Brucken with a 2015 exhibit on the Civil War in the West.

“As someone who grew up in Southern California and taught history here for nine years at the secondary level,” Lynch said, “I am very excited to play a part in re-conceptualizing Southern California’s place in the Civil War-era West.”

To commemorate the sesquicentennial of the Civil War the Drum Barracks in Wilmington, will host “Turning Points” in September, an exhibit and event highlighting two major areas of conflict: Vicksburg and Gettysburg. Other events will occur in subsequent years to commemorate the 150th anniversary of each year of the war.