Robert Jackson and Denise Marshall each traveled a twisted and bumpy road to get out of troubled upbringings in South Los Angeles. Eventually it led them both to UCLA, where they are now fourth-year students majoring in African-American studies.

Prime examples of how self-determination and hard work can beat seemingly insurmountable odds, Jackson and Marshall are about to set out on a new road. This one leads to places they never dreamed of seeing and people they never imagined meeting.

They are now headed for ground zero of the Palestinian-Israeli conflict. 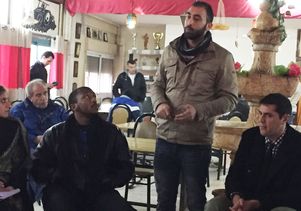 Courtesy of Daniel Wehrenfennig
A resident of the Dheisheh Refugee Camp in Bethlehem talks to a group of students, including UCLA students Anthony Hardy (sitting to his left) and Saeed Marandi (sitting right).

Jackson and Marshall are two of 10 UCLA students traveling to the Middle East later this month with the Olive Tree Initiative (OTI), a University of California-based organization that promotes understanding through immersion in the history, culture and complexities of the Israeli-Palestinian conflict. Begun at UC Irvine in 2007, the program seeks to facilitate conflict resolution by exposing participants to many voices on an issue that has generated tension on college campuses across the country. The initiative, with nine chapters on college campuses and more than 400 participants nationwide and in the United Kingdom, does not advocate for one side or the other, but requires that students respect the rights of all to voice their opinions.

After months of rigorous academic preparation, candid discussions and reflection on campus, the group from the UCLA chapter of OTI will begin its journey on July 19, with a stopover in Washington, D.C. and New York to speak with diplomats at the State Department, the White House and the United Nations and other regional experts before heading to Jordan, Israel and the West Bank to hear from those whose lives are directly impacted by Israeli-Palestinian conflict.

“These experiences are going to change my life forever,” predicted Jackson, 29, who lived with violence and conflict for much of his life in Los Angeles. “I’ve survived a drive-by and a mugging. I’ve been held at gunpoint several times. So I’ve been through a lot. … But over there, I will be meeting people who could lose their lives so easily over something I really don’t understand very well. I think that will be life-changing. I won’t take one day — one hour of it — for granted.”

For Marshall, 39, a former gang member who served time in a juvenile detention camp for looting during the 1992 L.A. riots before steering her life in another direction, the OTI trip is a chance of a lifetime to experience another culture.

“My issue is women. I know how it feels to be a black woman in our society,” she said. “I know how it feels not to have a voice. What about these women?  How do religion and the politics in that part of the world influence the way women are treated and what they become?”

For Jackson and Marshall — both leaders of student groups that assist disadvantaged communities — the trip will be their first outside the United States. They are each trying to raise the $4,000 needed to cover expenses after receiving a $2,000 stipend from UCLA. “I think this trip will broaden my horizons because I haven’t been anywhere in my life,” Marshall said. “Most of what I’ve seen is Los Angeles — I know every street, every nook, every cranny. Just to be somewhere else will be different for me.”

According to an activity-packed itinerary that is subject to change, the UCLA students will be traveling throughout the Middle East and meeting with government officials, journalists, academics, college students, soldiers and business leaders on both sides of the conflict as well as with representatives of organizations working to find a resolution. 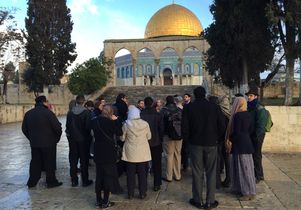 Courtesy of Christopher Nguyen
Students on the Olive Tree Initiative trip visit the Temple Mount/Haram al-Sharif in the old city of Jerusalem. The site has great religious significance for Jews, Christians and Muslims.

“The kind of access OTI has is very, very special,” said Antonio Sandoval, director of UCLA’s Community Programs Office, who visited the Middle East with OTI earlier this year. During that trip, the UCLA contingent was invited into the compound of the wealthiest industrialist on the West Bank to speak with him. “You go there with an open mind ready for open dialogue and open debate,” Sandoval said.  At the frontlines of the conflict, the students will eat lunch with families living in Palestinian refugee camps, visit an Israeli city that’s been the target of rocket attacks, meet bereaved parents from both sides, hear from Israeli soldiers and speak with members of Palestinian security forces.

The search for a deeper understanding will take students to places where they can see, touch and feel the impact of war as they travel to the Dead Sea, make the Beit She’an Crossing, and visit the Golan Heights, the Syrian and Lebanese borders, Nazareth, Haifa, Galilee, Jerusalem and many other important locations.

Listening to viewpoints across the spectrum and talking with others who hold opposing opinions can be transformative for participants and build leadership qualities, organizers said.

“The term ‘life-changing’ has been used quite a bit by OTI alumni,” said Daniel Wehrenfennig, executive director of the organization. For Jackson and Marshall, he said, “to be chosen to be part of OTI and this Middle East trip is very special to them in many ways. First, it’s a recognition of their academic and personal development. OTI is very selective in its participants, and the few students who are chosen are representing UCLA and UC to the U.S. government, the UN and governments in the region.”

In addition, he said, “traveling with a very diverse group that will be tested under the stressful circumstances of international conflict will shape both of them a lot.”

Christopher Nguyen, who went to the Middle East with OTI as a UCLA student last January before graduating in June, can vouch for that.

“The trip has a way of bringing everyone’s personalities and opinions to the forefront [so] that there is no way for everyone to not learn. Crossing so many borders — mentally, culturally and physically — everyone becomes much more conscious of themselves, each other and hopefully … how we generally live day to day.”