Dr. Kelsey Martin has a map of Africa on the top of her right foot — an indelible reminder of the two-and-a-half years that she spent as a Peace Corps volunteer in the central-African country of Zaire. The “map” is a ragged scar left behind after a festering splinter led to an infection of “flesh-eating bacteria.” Back home in Seattle, Washington, she underwent surgery, during which doctors grafted a skin flap from her thigh over the gaping hole. Much to her delight, the resulting scar healed in the shape of the continent that she had come to love.

“It’s like my rite-of-passage tattoo that brings me back to a time and a way of life that are so different from the world I live in now and put many of my daily L.A. anxieties and concerns into perspective,” she says.

Martin’s time in Zaire — today known as the Democratic Republic of Congo — was but one of many side trips she has taken along a winding path that eventually brought her to UCLA, where she has established herself as a preeminent neuroscientist and, in September 2015, assumed the position of interim dean of the David Geffen School of Medicine at UCLA.

Martin grew up in a globetrotting household. Her father is a renowned scientist — he studies aging at the University of Washington — and her mother was an adventurous collector of folk art. During her father’s sabbaticals, the family would head off for extended trips that took them to live in Scotland, France, England, Germany and India. As a result, she often found herself the new kid in school. While it wasn’t always easy, she credits her nomadic childhood for sparking her interest in human behavior. One example: starting sixth grade in Paris, France. “I didn’t speak a word of French,” she says. “It was sink or swim. I would observe people and think a lot about how they behaved in order to adapt.” She quickly became fluent in French.

“That was a complete immersion experience,” she recalls. “We were the only two white people in the village. We lived in a mud hut with an outhouse and no electricity. People would stare at us and call us ‘ghosts.’” 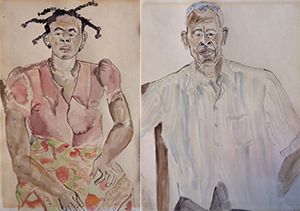 Martin, who is also an artist, did these watercolors of Chief Mbalayi (right) and his wife Ngomba, from Bibanga, Democratic Republic of Congo.

It was her experience in Bibanga that sparked Martin’s interest in medicine. Mothers in the province feared the autumn months because it was then that measles would erupt and kill dozens of infants, and so “we organized an outreach program and wrote grants to fund measles vaccinations,” Martin says. “That year, for the first time, no measles epidemic hit the village, and no babies died.”

Saving lives, she discovered, was more compelling than analyzing literature. Taking note of his daughter’s emerging interest in medicine, Martin’s father started to mail her biographies of famous scientists, which she devoured by the light of a petrol lantern.

Home in Seattle after her struggle with necrotizing fasciitis, Dr. Martin had nine months of recovery during which to reflect. She decided to go to medical school but first took a job at Yale in the lab of a researcher studying the transmission of HIV. “I fell in love with being in the lab,” she says. She enrolled in the M.D./Ph.D. program at Yale University, and after graduation, in 1992, she was a postdoctoral researcher at Columbia University. There, she worked under Eric Kandel, M.D., who won the Nobel Prize in Physiology or Medicine for his work on memory formation — the field that would become the primary subject of Martin’s own research.

In 1999, Martin came to UCLA as assistant professor in psychiatry and biological chemistry and quickly advanced to become chair of the Department of Biological Chemistry. Her research focuses on the process of plasticity: how networks of brain cells store memories about experiences and, in turn, how those experiences rewire the brain. “Our brains house tens of billions of nerve cells that make tens of billions of connections with each other,” she explains. “While partly hard-wired through genetics, each neural circuit is also dynamically changed by our experiences. This influences how we feel, think, behave and perceive the world.”

Last year, Martin was appointed executive vice dean and associate vice chancellor and then, this past fall, interim dean of the medical school. “It may seem like a long and winding road, from English major to Peace Corps volunteer to neuroscientist to my interim deanship,” she says, “but for me, this leadership role brings together everything I am passionate about. I am surrounded by amazing faculty and trainees who are as devoted as I am to the humanistic and scholarly mission of the David Geffen School of Medicine at UCLA, and I am very grateful for the opportunity.”

This story was originally published in the spring 2016 issue of U Magazine, a publication of UCLA Health.