A satellite launched April 28 from Vostochny, Siberia is expected to provide scientists worldwide with measurements of radiation in space and advance space sciences for years to come, said the mission’s principal investigator, Yuri Shprits, a research geophysicist with the department of Earth, planetary and space Sciences in the UCLA College.

The ELFIN-Lomo Electron Loss and Field INvestigator - Lomonosov) project will advance our understanding of space weather and the dynamics of dangerous electrons that are hazardous to satellites and humans in space. The project is funded by the National Science Foundation as well as by research and development programs at UCLA and Moscow State University.

Co-investigators of the project are UCLA professors Vassilis Angelopoulos and Christopher Russell of the department of Earth, planetary and space sciences. 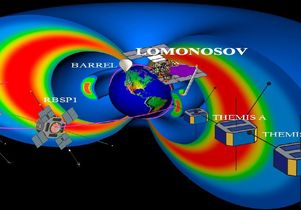 The main scientific objective of ELFIN-Lomo is to understand the dominant mechanism of loss of energetic electrons and ions. Energetic particles create a hazardous environment for satellites and humans in space and occasionally cause satellite failures.

The project's technology includes UCLA-built particle instruments, such as a new generation of miniature magnetometers — hundreds of times smaller than conventional space magnetometers — that provide very precise measurements of the magnetic field and particle detectors that can measure particle radiation in space. The instruments were built in less than six months — the traditional mission time cycle often takes more than 10 years — and the cost of the instruments is about 100 times less than what is often spent on similar space instruments, according to Shprits.

"We expect that our instruments will continue monitoring the space environment and provide scientists around the world with measurements of radiation in space and will advance space sciences for years to come,” Shprits said.