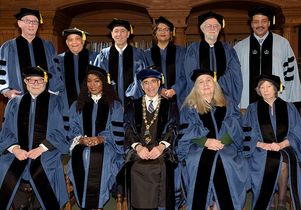 Judea Pearl, UCLA’s chancellor’s professor of computer science and statistics, received an honorary doctorate at Yale University’s commencement on May 21.

Pearl, who has made foundational contributions to modern artificial intelligence, was one of 10 people to receive the honor. Among the others were actor–director Angela Bassett and astrophysicist–author Neil deGrasse Tyson.

The citation for Pearl’s degree, which was read at the ceremony, said in part: “Your discoveries have extended the frontiers of human knowledge. With elegant equations and imaginative models, you have transformed our understanding of cause and effect, probability, and uncertainty. Your insights unlock complex puzzles while opening new areas for exploration.”

Pearl has been a UCLA faculty member since 1970. He received the 2011 A.M. Turing Award, considered the Nobel Prize of computing, for his landmark work in processing information under uncertainty. Earlier this year, he was one of three emeriti faculty who received UCLA’s Edward A. Dickson Emeritus Professorship Award, which recognizes distinguished achievements following retirement. He also is the author of a recently published book about the science of causality.