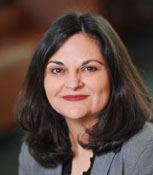 Professor Laura Gómez has been appointed interim dean of the UCLA College Division of Social Sciences. She will assume the new post on July 1, when Dean Alessandro Duranti is scheduled to step down and return to the faculty.

Gómez holds a primary appointment in the UCLA School of Law and joint appointments in the departments of sociology and Chicana and Chicano studies in the College. She began her academic career at UCLA in 1994, joined the University of New Mexico as a professor of law and American studies in 2005, and returned to our faculty in 2011.

Gómez’s research spans the fields of law and society, critical race theory and the sociology of race, and her articles have appeared in journals including the Law and Society Review and the Annual Review of Law and Social Science. She is the author of two monographs, “Misconceiving Mothers: Legislators, Prosecutors and the Politics of Prenatal Drug Exposure” (1997) and “Manifest Destinies: The Making of the Mexican American Race” (2007), with a third under advance contract, “Evicted from Whiteness: Latinos and the Future of Race.” She co-edited the anthology, “Mapping ‘Race’: Critical Approaches to Health Disparities Research” (2013).

In addition to her scholarly accomplishments, Gómez has held numerous management and leadership positions at UCLA and elsewhere. She is the past president of the Law and Society Association and has been associate editor of the Law and Society Review. She was associate dean for faculty development at the University of New Mexico School of Law, where she also co-directed the Institute for the Study of Race and Social Justice.

At UCLA, she has served as vice dean for faculty development at the law school and co-directed the school’s Critical Race Studies Program. She participated in the UCLA Faculty Leadership Program in 2014–15. Her many committee appointments include the Academic Senate’s privilege and tenure committee, the UCLA Moreno Report Implementation Committee and faculty advisory boards for the UCLA Chicano Studies Research Center and the Center for the Study of Women. She also serves on the 2016 committee of visitors for the National Science Foundation’s Division of Social and Economic Sciences.

Gómez received an A.B. in social studies from Harvard College, a J.D. from Stanford Law School and an M.A. and a Ph.D. in sociology from Stanford University. Prior to beginning her teaching career, she worked on Capitol Hill and was a law clerk on the Ninth Circuit Court of Appeals. She has held residential fellowships at the Stanford Humanities Center and the School for Advanced Research in Santa Fe. She has been a principal investigator on NIH and NSF grants. Her honors include a Truman Scholarship (1984), an NSF Minority Graduate Fellowship (1987) and recognition as one of Hispanic Business magazine’s 100 Most Influential Latinos (2011).