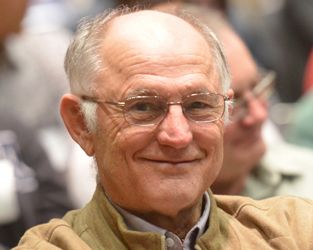 Paul Davis is a professor of geophysics at UCLA and an expert on earthquakes and tsunami. Davis has conducted seismic array studies of rifts and subduction zones and researched earthquakes and the forces around seismic events in Southern California, particularly following the Northridge earthquake, and in other parts of the world, like Peru.

Davis was part of the Los Angeles Regional Seismic Experiment (known as L.A.R.S.E.), a cooperative study of the crustal structure of Southern California, conducted by earth scientists from the U.S. Geological Survey and the Southern California Earthquake Center. The study produced reflection, refraction and 3-D tomographic images of the active geologic structures in the Los Angeles region. These include the San Andreas Fault, the frontal fault system of the Transverse Ranges, blind thrust faults and folds in the Los Angeles basin and the San Fernando Valley, and strike slip faults south of the Transverse Ranges.