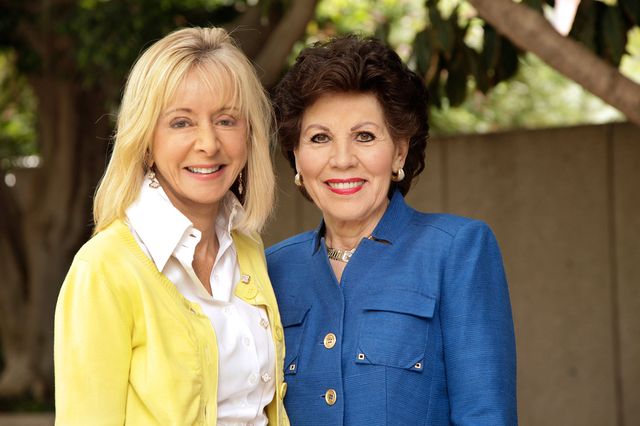 The UCLA Anderson School of Management today announced the largest gift in its history: $100 million from longtime supporter Marion Anderson to position the school for continued excellence and honor the legacy of her late husband, for whom the school is named.

Sixty million dollars will be used to establish an endowment to support priorities such as student financial aid and fellowships, faculty and research funding, and program innovations to prepare future graduates for leadership positions in the 21st century global economy. Forty million dollars will provide seed funding for a new building that will advance students’ learning and development experiences by adding technology-enhanced classrooms and spaces that connect students with faculty and alumni. The new building also will house research centers and faculty.

“We are eternally grateful for Marion’s extraordinary generosity, which raises to new heights her commitment to UCLA Anderson and to the entire campus,” said UCLA Chancellor Gene Block. “Marion’s most recent gift will enhance learning opportunities for generations of students and support scholarship by faculty who are leaders in their fields. As UCLA Anderson expands its reach and distinctions, Marion’s gift provides the resources — both financial and physical — to realize an ambitious vision."

The school was named the John E. Anderson Graduate School of Management in 1987 in recognition of the first gift from John and Marion Anderson. John Anderson earned a bachelor’s degree in business administration at UCLA in 1940 and later founded Topa Equities, which owns and operates numerous businesses involved in agriculture, insurance, real estate, beverage distribution and automotive dealerships. He died in 2011 at the age of 93.

“I am humbled by this transformative gift,” said Judy Olian, dean of UCLA Anderson and the John E. Anderson Chair in Management. “From student fellowships to faculty recruitment and retention, to innovative research programs and the state-of-the-art facilities that will house them, Marion Anderson has enabled our future and empowered us with her confidence in the path we are taking.”

Olian added: “I am inspired every day by Marion’s personal values and fierce integrity, and I am so very proud and grateful that she is so closely connected to our school. She has been an unfailing supporter and driver of change around the educational needs of business school students and graduates in a rapidly changing marketplace.”

Anderson said her gift is motivated by her appreciation of the role and impact of UCLA Anderson as a global innovator in management education, and that it is a tribute to her husband’s passion for education and community priorities.

“Like my late husband, I take enormous pleasure in furthering the school’s impact on the lives of future global leaders, in advancing the practice of management through faculty research and in facilitating access to a world-class learning opportunity for students from all walks of life,” she said. “UCLA Anderson has adopted an innovative financial model that depends on private giving. I hope my gift will inspire others to join me and my family in making significant philanthropic investments in UCLA Anderson and UCLA, and in future generations of students and faculty.”

The $100 million donation formally launches Into the Next: The Campaign for UCLA Anderson, which is part of the Centennial Campaign for UCLA, a $4.2 billon fundraising drive scheduled to conclude in 2019, the university’s 100th anniversary. UCLA Anderson has already received gifts or pledges of more than $183 million toward its revised goal of $300 million for Into the Next.