George Foulsham | September 9, 2016
UCLA Luskin on Vimeo.
The L.A. River Greenway Guide identifies the obstacles that past improvements around the L.A. River faced so that other communities can learn from their successes and challenges.

If you’re looking for an example of what communities can do to take advantage of the land that adjoins the Los Angeles River, look no further than Marsh Park — 3.9 acres of greenway in the Elysian Valley neighborhood of Los Angeles, not far from downtown.

The park features trees, green infrastructure, play and fitness equipment, a walking path, picnic tables and an open-air pavilion, all built around a large industrial building that houses a company that takes modular shipping containers and turns them into residences for the homeless.

The park also serves as a gateway to the L.A. River and is one of the case studies used by researchers from the UCLA Luskin Center for Innovation in preparing a new Los Angeles River Greenway Guide. The guide is now available online.

“The L.A. River Greenway Guide consists of 14 case studies that highlight different parks, pathways, access points and bridges that have been constructed along the river,” J.R. DeShazo, director of the Luskin Center for Innovation, said. “What we have tried to do is to identify successful examples of improvements in the river greenway and then identify the challenges and the obstacles that those improvements faced so that other communities can learn from their successes, challenges and, sometimes, their failures.”

The guide highlights four types of projects: bridges across the river, pathways along the river, community access points that connect communities to the river, and parks next to the river. It looks at the history of various efforts, identifies the challenges faced in each of those projects and spells out how those obstacles were overcome, leading to successful riverside gateways.

One example of useful information provided by the guide is a section on overcoming the hurdles associated with ownership and governance issues, with hints on how to deal with easement, maintenance and permit questions. 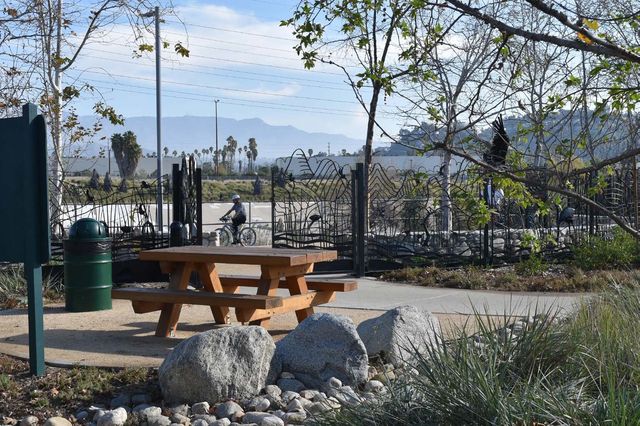 Andrew Pasillas
At Marsh Park in the Elysian Valley, amenities in the park and along the bike path that parallels the Los Angeles River invite users to play or relax.

The guide will be unveiled at a free event, “A Night at the L.A. River,” on Saturday, Sept. 10, from 5 to 8 p.m. at the Frog Spot, 2825 Benedict St., in Los Angeles. It is cosponsored by the Luskin Center for Innovation and the Friends of the Los Angeles River. The event will include a panel discussion on the “L.A. River Greenway Through Public-Private Partnership,” featuring Michael Affeldt of the L.A. mayor’s office.

The L.A. River, which starts in the Simi Hills and meanders 51 miles to the Port of Long Beach, has been called one of Los Angeles’ most ill-used natural treasures but also a neglected eyesore that looks more like a deserted freeway than a river.

In recent decades, concerted efforts have sought to revitalize and repurpose the river and its adjoining greenbelt. Graduate student researchers and scholars at the Luskin Center, part of the UCLA Luskin School of Public Affairs, are working with stakeholders, communities and organizations in an attempt to create a new future for the river and its environs.

The Luskin students, guided by DeShazo, deputy director Colleen Callahan and project manager Kelsey Jessup, produced the toolkit after receiving feedback at a workshop hosted by the Luskin Center earlier this year. Participants included staff, advocates and leaders from the communities, as well as nonprofits, government agencies, elected officials, policymakers, business and business associations, and academics, researchers and students.

The Luskin students have met with representatives from the communities that border the L.A. River, seeking their input and concerns. The new guide reflects the Luskin team’s research and recommendations.

“We think about the L.A. River greenway as an opportunity to enhance a 51-mile stretch adjacent to the L.A. River,” said Andrew Pasillas, a Luskin researcher who graduated in June with a master’s degree in urban planning. “In choosing a range of focus for the guide, we first held a lower L.A. River workshop which over 100 community residents and organizations attended. We heard from them what would be most beneficial in their efforts to develop projects, talking about these specific development processes and where they stumbled in the past.”

According to DeShazo, the researchers studied examples of successful projects — often near the northern part of the river — and “we thought about how those opportunities could be realized in the lower parts of the river where there are fewer river amenities and the greenway is more incomplete.”

The guide, Jessup said, is also a nod to what has already been accomplished.

“Our second goal,” she added, “is to provide a resource for community members, government agencies and anyone who wants to do a project — to better understand the challenges that come with doing a project along the river and to come up with solutions to overcome those challenges.”

The researchers studied the history of the river — why it was ignored for so many years and what helped transform the region’s approach from what had been nothing more than a flood-control mechanism.

“Revitalizing the river has been challenging because there has been a long history of isolating it from the public,” Pasillas said. “Stretching back to the early 1930s and ’40s, there was a series of devastating floods that led to the thought process that we have to place concrete on the river itself to protect people.”

“There’s been a disconnect between the people of Los Angeles and the river,” Jessup said. “A lot of people don’t even know there is a river, and if they do, they think it’s this concrete channel that is in the way and dividing communities. 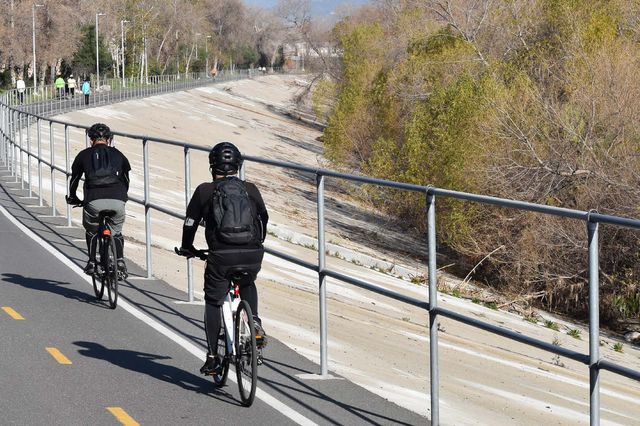 “But there’s been a shift over the past few decades and a lot of communities are seeing the river as a resource and an opportunity, especially along the greenway, for health, transportation, environmental and economic benefits,” she added. “The Luskin Center started this guide because we saw an opportunity to complement some of the other efforts that are being made to help connect the community to the river.”

According to the researchers, the guide is an example of how the Luskin Center can help communities in Los Angeles and throughout Southern California overcome obstacles.

“We hope that this guide can serve to empower communities by bringing forth the voices of river-adjacent communities that have never been heard before,” Jessup said. “The idea of a complete river greenway is the equitable distribution of different project types for different communities and residents to enjoy.”

UCLA and the Luskin Center chose to take on the guide because of the university’s expertise in urban planning.

“We bring together skills — whether it be ecology, park design or financing expertise — needed to help bring these projects to fruition,” DeShazo said. “We are very committed to engaging with Los Angeles and the communities that make up Los Angeles and working with them to make sure their vision of their section of the greenway is realized.”

The L.A. River Greenway Guide was made possible by donations from the Rosalinde and Arthur Gilbert Foundation, the Bohnett Foundation and the California Endowment.