From sashimi to smoked salmon, ceviche to mussels Provençal, seafood dishes are among the world’s best-loved culinary delights and dietary staples.

But the billions of people on the planet may love them too much. According to United Nations estimates, about 57 percent of fish stocks are exploited — meaning they can bear no more fishing without population decline — and 30 percent are over-exploited, depleted or recovering.

A solution may be on the horizon. According to a study published today and co-authored by Peter Kareiva, director of the UCLA Institute of the Environment and Sustainability, ocean-farmed fish and seafood — or aquaculture — has the potential to satisfy global demand by using a tiny fraction of oceans. Freshwater fish farms have been around for a long time, but off-shore operations are a more recent development.

Drawing on the findings of the paper, which maps the global potential of aquaculture, a mere 0.025 percent of the world’s oceans could satisfy global demand for fish, which is at an all-time high. An area of prime locations the size of Lake Michigan could theoretically provide as much as all of the world’s wild-caught fisheries combined.

Kareiva said the findings offer hope for both the environment and people.

“We need to find more protein for our growing population, and we have pretty much tapped out wild fish as protein sources,” Kareiva said. “This study shows that farming fish in the ocean could play a huge role in feeding people without degrading our ocean or overfishing wild species.”

Previous research has mostly focused on specific aquaculture topics like where to best farm specific species, said Rebecca Gentry, the study’s lead author and a marine ecologist who got her doctorate from UC Santa Barbara’s Bren School of Environmental Science and Management. When settling on the broad subject of the study, the research group — which includes non-governmental organizations, universities and industry experts — quickly discovered that there were many questions to answer.

“We realized that there is a lack of broad-scale science looking at how aquaculture can be done sustainably,” Gentry said. “We really didn’t know where it can be done, how much it can be done.”

First, they had to rule out areas that can’t be farmed — places like shipping lanes, marine protected areas and offshore drilling sites. They looked at the physiology of 180 species being farmed and what environments are most conducive to them, combining data like ocean depth, temperature and the biological needs of species. They also ruled out places that would be impractical given current technology — the middle of the ocean might be farmable in the future, but the industry can’t do it effectively now. 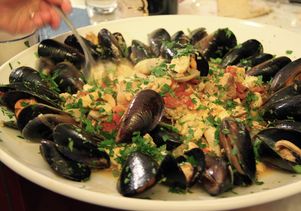 Matt Ryall/Flickr
Mussels provide additional environmental benefits by cleaning the waters they are farmed in.

With warmer waters that support more life, “tropical countries tend to have the highest production potential,” Gentry said. “These are also the places where there’s a lot of need for economic development, with food security issues looming.”

Ocean aquaculture is already the fastest-growing food sector, but a lot of work remains to reach its vast potential. There are a few difficult barriers to overcome. In some countries, including the United States, a network of regulations makes it challenging to establish even a single farming operation, the researchers said. In other places, lack of regulation leads to environmental destruction — concentrated waste from poorly managed or designed operations can severely pollute waters and coastal areas.

Also, ocean aquaculture needs to compete in the marketplace and turn a profit, and farming in the open ocean is trickier than doing so close to shore, requiring extra investment. “It takes some engineering to be able to withstand waves and currents,” Gentry said. “The offshore environment can be a pretty brutal place. Having strong infrastructure is taking some time to get going.”

Aquaculture is a tradition that stretches back to at least the fifth century B.C., when East Asian farmers raised fish in their flooded rice fields. Doing it in the ocean is a more recent development — and has mostly taken place in sheltered bays and estuaries near land. Farming close to shore is often less sustainable because it lacks deep waters to disperse the byproducts of the process and interferes with other uses like recreation.

Poorly planned farms have led to negative press, much of it well-deserved, Gentry said. Farmed fish operations have often come with environmental degradation and problems with diseases and parasites. In recent years, however, the science and industry best practices have been refined. Now it’s a matter of putting it into action in a thoughtful way that takes into account the needs of various communities.

“We need to think and be smart and put it where it should go from a production, environmental and social perspective,” Gentry said.

Still, the growing industry has massive promise. Coastal countries like Argentina, Indonesia and India have fertile seas that could feed huge populations while providing local economic benefits. Doing it sustainably will not only keep fish on the menu, it will help wild populations bounce back, improving the health of all marine life.