The approach, developed by a UCLA-led team of neuroscientists, is described in two new papers, published in the journals Nature Communications and Nature Human Behaviour.

Their method could have implications for treating people with depression, dementia and anxiety disorders, including post-traumatic stress disorder, said Hakwan Lau, a UCLA associate professor of psychology and the senior author of both studies. It could also play a role in improving leadership training for executives and managers.

In the Nature Human Behaviour study, the researchers showed that they could reduce the brain’s manifestation of fear using a procedure called decoded neurofeedback, which involves identifying complex patterns of brain activity linked to a specific memory, and then giving feedback to the subject — for example, in the form of a reward — based on their brain activity.

The researchers tested the technique on 17 undergraduate and graduate students in Japan. Participants were seated in a functional magnetic resonance imaging, or fMRI, scanner and shown patterns of vertical lines in four colors — red, green, blue and yellow. The blue and yellow images were always shown without shocks, but the red and green patterns were often accompanied by a small electrical shock administered to their feet.

As a result, the subjects’ brain patterns began to register fear for the red and green images. But the scientists learned that they could use decoded neurofeedback to lessen the subjects’ fear of the red pattern. They did this by giving the subjects a small cash reward — the equivalent of about 10 cents — each time they spontaneously thought about the red lines (but gave no rewards for thinking about the green lines), which the scientists could determine in real time based on their brain activity. 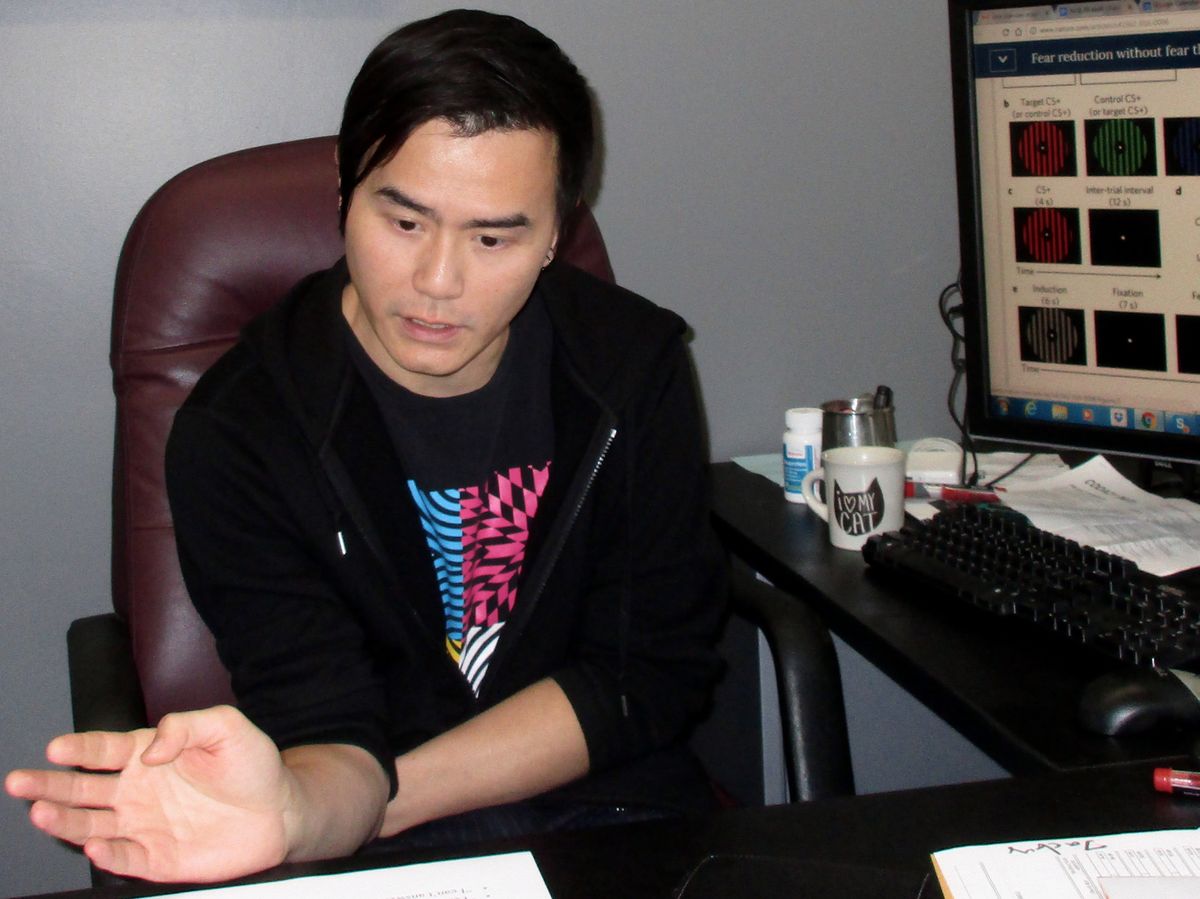 The following day, researchers tested whether the participants still had a fear response to the vertical lines. The red pattern, which had been frightening because it was paired with shocks, became less so because it now was paired with a positive outcome. With the reward as part of the equation, researchers found that participants perspired much less than when they had seen the red lines previously, and their brain’s fear signal, centered in the amygdala, was significantly reduced.

“After just three days of training, we saw a significant reduction of fear,” Lau said. “We changed the association of the ‘fear object’ from negative to positive.”

Participants were not told what they had to do to earn the money — only that the reward was based on their brain activity and that they should try to earn as much money as possible. And each time participants were told they had won money, their brains demonstrated more of the same pattern that had just won them the cash reward.

Although participants tried to guess which of their thoughts were triggering the rewards — some guessed humming music or thinking about a girlfriend, for example — none actually figured out how they earned the money or recognized that the researchers had effectively reduced their fear of the red lines.

Participants did still register fear on their fMRI scans when they saw the green pattern because, without the financial rewards, they still primarily associated the color with shocks.

The findings could help improve upon standard behavioral therapy, in which a person who is afraid of a certain object is exposed to photos of that object, or even the object itself — which can be frightening enough that many people cannot complete treatment. Lau said using “unconscious fear reduction,” like in the experiment, could be more effective in many cases.

Ten participants were seated in an fMRI scanner and asked to watch a computer screen with hundreds of dots moving in different directions. Participants were asked whether the majority of dots were moving to the left or the right, and how confident they were in their responses. That initial feedback gave the researchers a chance to see how high confidence and low confidence were represented in brain patterns.

Participants then were shown dots moving in random motion and told to think about anything — and that certain thoughts would earn them cash rewards. Every time the brain pattern looked like it was representing high confidence, the participant received a reward of up to the equivalent of 10 cents; subjects received smaller rewards if their brain activity indicated less confidence.

Next, the researchers showed the students the images from the first phase of the experiment — with numerous dots primarily moving in one direction or the other. The scientists found that although students weren’t any better at guessing the primary direction of the dots’ motion, they had become more confident in their guesses.

By studying brain patterns, Lau said, neuroscientists can decode people’s thoughts about food, love, money and many other concepts, which eventually could help them design treatments for eating disorders, gambling addiction and more. The researchers next will determine whether the techniques described in the papers can be used to help patients with real phobias.

“We are cautiously optimistic,” he said.

Co-authors of both studies include Mitsuo Kawato, professor and director of the ATR Brain Information Communication Research Laboratory Group in Kyoto, Japan; Ai Koizumi, a UCLA postdoctoral scholar; Ben Seymour, a neuroscientist at the University of Cambridge; and Aurelio Cortese, a doctoral student in Kawato’s laboratory.