Rebecca Laming and Stuart Wolpert | April 8, 2014
Four young men who have been paralyzed for years achieved groundbreaking progress — moving their legs — as a result of epidural electrical stimulation of the spinal cord, an international team of life scientists reports today in the medical journal Brain.
The study, conducted by researchers from the University of Louisville, UCLA and the Pavlov Institute of Physiology, was funded in part by the Christopher and Dana Reeve Foundation and the National Institutes of Health.
All four participants were classified as suffering from chronic, motor complete spinal cord injuries and were unable to move their lower extremities prior to the implantation of an epidural stimulator. The stimulator delivers a continuous electrical current to the participants' lower spinal cords, mimicking signals the brain normally transmits to initiate movement.
The research builds on an initial study, published in May 2011 in the journal The Lancet, that evaluated the effects of epidural stimulation in the first participant, Rob Summers of Portland, Ore., who recovered a number of motor functions as a result of the intervention. 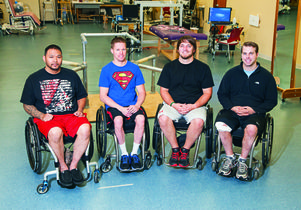