California is headed for a future of precipitation extremes.

Research by UCLA climate scientists, published today in Nature Climate Change, projects that the state will experience a much greater number of extremely wet and extremely dry weather seasons — especially wet — by the end of the century. The authors also predict that there will be a major increase in the likelihood of severe flooding events, and that there will be many more quick changes from one weather extreme to the other.

Those who manage California’s water supply and protect residents from wildfires, floods and other natural disasters should be planning for those changes, said lead author Daniel Swain, a climate scientist at UCLA’s Institute of the Environment and Sustainability and The Nature Conservancy. Millions of lives, wildlife and the health of a multitrillion-dollar economy depend on it.

Although the differences won’t be noticeable to people who merely watch statistics like average annual rainfall — because the dry and wet periods will largely cancel each other out — they will have a major effect on the lives of Californians.

“These are actually huge changes occurring; they’re just on opposite ends of the spectrum,” Swain said. “If you only look for shifts in average precipitation, you’re missing all of the important changes in the character of precipitation.”

Swain and his fellow researchers, including professors David Neelin and Alex Hall of UCLA’s department of atmospheric and oceanic sciences, also found that California’s wet weather may become even more concentrated in winter months than it already is, while storms in the spring and fall become less likely and less frequent.

The study predicts that the changes will be powered by two common features: a warming atmosphere and warming oceans.

“In a warmer climate, there is more water vapor in the atmosphere,” Neelin said. “When a storm gets going, air converges at low levels carrying more water vapor with it. With more vapor to dump out, the result is more rainfall.”

The “Other Big One”

The UCLA study also found that over the next 40 years, the state will be 300 to 400 percent more likely to have a prolonged storm sequence as severe as the one that caused a now-legendary California flood more than 150 years ago.

The Great Flood of 1862 filled valleys with feet of water and washed gold rush miners and their equipment out of the mountains. In the Central Valley, floodwaters stretched up to 300 miles long and as wide as 60 miles across. One-third of the state’s taxable land was destroyed, and the recently elected governor, Leland Stanford, was forced to row to his inauguration.

It could happen again, only with more catastrophic consequences because the state is so much more populated than it was then. In 1862, California’s population was 500,000; today, it’s close to 40 million. Cities like Stockton, Fresno and Bakersfield are situated in locales that were inundated by the 1862 flood. 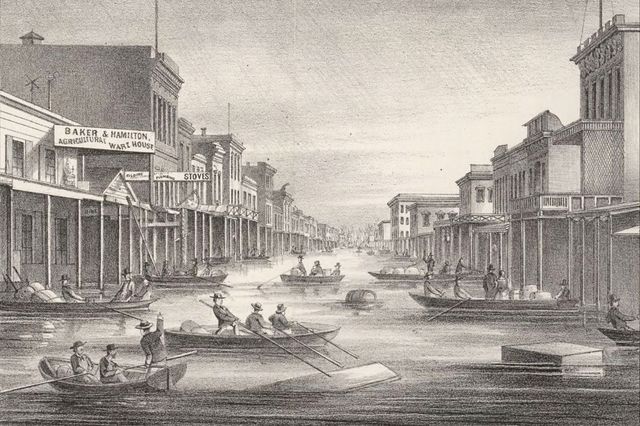 A. Rosenfield/Wikimedia Commons
Downtown Sacramento during the Great Flood of 1862. One-third of the state’s taxable land was destroyed and Governor Leland Stanford was forced to row to his inauguration.

Today, that kind of flood would be a nightmare. Droughts cause long-term hardship that stress human and wildlife populations, but they don’t bring the kind of sudden damage that massive floods cause, Swain said.

“People tend not to die in droughts in places with a developed economy,” Swain said. “People do still die in floods. It happened this year and last year in California. During an event of a magnitude similar to the 1862 flood, a lot of lives would be at risk.”

Should that type of massive storm occur, the United States Geological Survey already has a name for it: “The Other Big One.” (The name is a nod to the well-known moniker for the next major earthquake that scientists expect will occur along the San Andreas Fault, but the USGS isn’t predicting that the two would be linked.) In 2011, the USGS prepared emergency planning guidelines for that type of storm — which scientists said could happen once every 100 or 200 years.

Swain said that it could be a nearly trillion-dollar disaster — more than double the cost of any previous natural disaster — and that it would devastate California economically and force millions to evacuate.

The impact would be magnified because such a flood could affect multiple regions throughout the state, including the Bay Area, the Central Valley and the Los Angeles Basin. In a state with the world’s sixth largest economy, several massive industries — agriculture, Silicon Valley and Hollywood among them — would be brought to a standstill.

Flooding would likely overwhelm flood prevention and water resources infrastructure such as earthen levees in the Central Valley, the Los Angeles River and other concrete water conduits in urban areas, and perhaps even dams and levees in some areas. It could even change the state’s geography permanently, Swain said. Much of the San Francisco Bay Delta region lies below sea level, and a large enough flood could destroy the network of levees that hold back the water, which would inundate vast swaths of currently dry land.

“I don’t think most people in California really have a grasp of the magnitude of this kind of event,” Swain said. “Millions of people living in the Central Valley would, at a minimum, have to leave for a while, and many could actually have their homes under 20 or 30 feet of water. This includes much of Sacramento.

“And all of these other cities in the Central Valley are much bigger than they used to be, and there are all of these sprawling suburbs in regions that were historically vast natural floodplains.”

Perhaps the only shred of good news with such a massive storm is that residents would likely have at least a few days to prepare — unlike in an earthquake, when there are, at best, only seconds of warning.

The paper also projects an increase in less-extreme but still severe precipitation events and seasons, like what the state experienced during the winter of 2016–17, when a series of storms filled reservoirs after a multiyear drought parched the state.

That kind of event now occurs a handful of times each century, Swain said.

“But under these projections, it would go from something that happens maybe once in a generation to something that happens two or three times,” Swain said. “Even if we are lucky and manage to avoid a repeat of 1862, these lower-magnitude events could still seriously test the limits of our water infrastructure.”

The paper also predicts a smaller, but still significant, increase in the frequency of extremely dry years. Seasons like the ones that parched Southern California in 1976–77 and 2013–14 would increase by 50 to 100 percent.

Another of the paper’s key findings is a projected increase in what the authors refer to as “climate whiplash” — transitions from very wet to very dry weather — similar to what California experienced from 2016 to 2017. The authors project that the frequency of such abrupt transitions will increase by 50 to 100 percent, with the greatest number of abrupt changes in Southern California.

The whiplash effect will be compounded by more-concentrated wet and dry seasons. Instead of the sporadic rains that mark the gradual onset of autumn and tapering off of spring, California will likely have a larger percentage of its annual precipitation fall during a narrower window, from December to March.

That kind of weather pattern can help create conditions that are especially favorable for wildfires, with parched vegetation remaining dry into October and November, which historically has been the early part of the rainy season. If that happens, dry vegetation would be more likely to coincide with warm, dry Santa Ana winds — which reach peak intensity in November and December — turning swaths of the state into dangerous tinderboxes.

(The researchers wrote that these were contributing factors in the December 2017 Thomas Fire, the largest in the state’s recorded history. That fire was also followed by intense rain that caused mudslides in Montecito, which killed 20 people.) 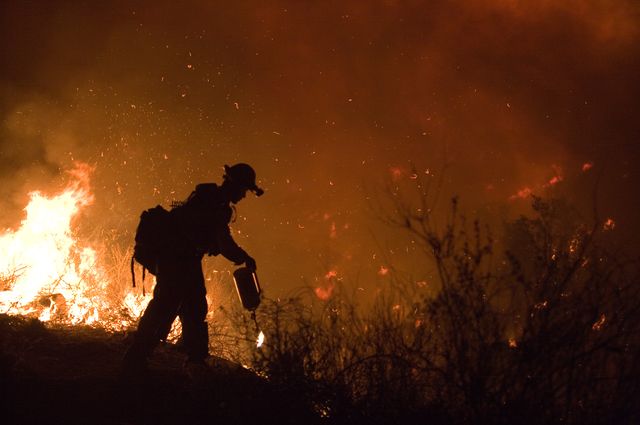 Andrea Booher/FEMA
The researchers forecast weather patterns that could help create conditions that are especially conducive to wildfires, like the 2007 Poomacha fire in San Diego County.

“The most dangerous combination historically is in September and October, when it’s really dry but the winds are starting to pick up,” Swain said. “What if it had started raining in October or November? Would the Thomas Fire have even broken out? Would it have burned so quickly? Or so intensely? The lack of autumn rains last year were a big part of the equation.”

Swain plans to travel to Sacramento to discuss the findings with representatives of the state water board and the Public Policy Institute of California. The message he will send has many facets, but one central theme.

“People who focus on precipitation averages aren’t wrong,” Swain said. “But they’re missing key aspects of our future climate — arguably the things that matter most if we want to maintain resilience and prevent harm in a warming world.”