Skiing in July? It could happen this year, but California’s days of bountiful snow are numbered.

After five years of drought and water restrictions, the state is reeling from its wettest winter in two decades. Moisture-laden storms have turned brown hillsides a lush green and state reservoirs are overflowing. There’s so much snow, Mammoth Mountain resort plans to be open for business on Fourth of July weekend.

But while all that precipitation has put a dent in the current drought — Governor Jerry Brown won’t decide whether to declare it over until the Sierra Nevada snowpack is assessed again in April — new UCLA research paints a worrying picture of how drought could affect the snowpack in the future.

The Sierra Nevada snowpack, which provides 60 percent of the state’s water via a vast network of dams and reservoirs, has already been diminished by human-induced climate change and if emissions levels aren’t reduced, the snowpack could largely disappear during droughts, according to findings in the study published today in the journal Geophysical Research Letters.

“The cryosphere — frozen parts of the planet — has shown the earliest and largest signs of change,” said UCLA climate scientist Alex Hall, who along with study co-author Neil Berg modeled what future California droughts will look like in terms of snowpack loss. “The Sierra Nevada are the little piece of the cryosphere that sits right here in California.”

During a drought we see less overall precipitation. Adding in warmer air caused by climate change a greater share of precipitation falls as rain, and snow melts more rapidly. So a frozen resource that gradually melts and recharges reservoirs is particularly vulnerable to a warming climate and droughts that are expected to become increasingly severe.

To protect California’s future from the threat of warming temperatures California needs to rapidly reconfigure its water storage systems and management practices.

“I think there are serious questions about the suitability of the current water storage infrastructure as we go forward,” said Hall, a professor of atmospheric and oceanic sciences said.

Besides offering a window into the future, the UCLA study revealed some climate effects that are already happening. Hall and Berg found that the Sierra Nevada snowpack during the 2011 to 2015 drought was 25 percent below what it would have been without human-induced warming. The effect was even worse at elevations below 8,000 feet, where snow decreased by up to 43 percent.

“Seeing a reduction of a quarter of the entire snowpack right now — not 20, 30 or 40 years from now — was really surprising. It was almost as if 2015 was the new 2050 in terms of the impacts we were expecting to see,” said Berg, who is a scientist at RAND Corp. 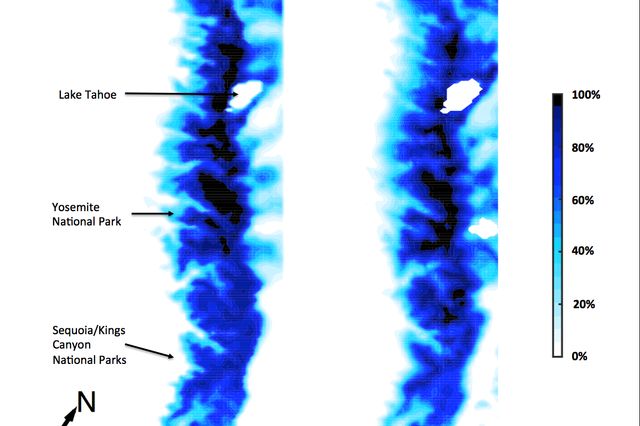 By the end of the current century, conditions could be even worse, the report stated. If humans continue emitting greenhouse gases in a business-as-usual scenario, average temperatures in the Sierras are projected to rise up to 10 degrees Fahrenheit, causing the snowpack to decrease during drought by a massive 85 percent. There would be almost no snow at altitudes below 8,000 feet. From a water resources perspective, an 85 percent loss would be as if there was no snow in the Sierras at all, Berg said.

Things don’t look much better if nations follow the United Nations’ Paris climate agreement, which seeks to limit global warming to between 1.5 and 2 degrees Celsius. Even with such mitigations, snowpack during a drought like the one California recently experienced is projected to drop 60 percent by century’s end.

Berg said he found the results sobering. “I feel like I’m walking through a living history book, where we’re seeing these major events unfold right before our eyes.”

Typically, the amount of water accumulated in the snowpack is similar to what reservoirs can store. As things heat up and snow melts earlier, “there’ll be a real storage problem and water will have to be let go,” Hall said.

Four scenarios for the Sierra Nevada snowpack under drought conditions. The measurement shown is the amount of water contained in the snowpack, averaged over the mountain range.

California doesn’t have the greatest track record with managing groundwater, which was severely depleted during the drought, particularly because of agricultural irrigation. The state legislature is taking steps to improve the situation, passing the Sustainable Groundwater Regulation Act in 2014 and launching small pilot projects in the Central Valley, where farmers are paid to flood their fields to recharge the groundwater.

But with climate change already altering snowpack in ways scientists believed was decades away, those efforts aren’t enough, Hall said.

“It needs to be on a much larger scale. We’re moving in the right direction, but it’s not nearly enough. We need to scale up these efforts and we need to be starting now.”