A team of scientists using a state-of-the-art UCLA instrument reports the discovery of a planetary-scale “tug-of-war” of life, deep Earth and the upper atmosphere that is expressed in atmospheric nitrogen.

Compared with other key elements of life — such as oxygen, hydrogen and carbon — molecular nitrogen is very stable. Two nitrogen atoms combine to form N2 molecules that stay in the atmosphere for millions of years.

The team of scientists measured the amount of 15N15N in air and discovered that this rare form of nitrogen gas is far more abundant than scientists had expected. The Earth’s atmosphere contains about two percent more 15N15N than can be accounted for by geochemical processes occurring near the Earth’s surface. 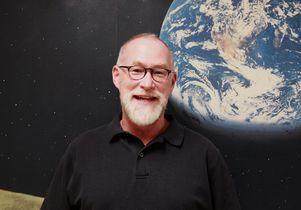 “This excess was not known before because nobody could measure it,” said senior author Edward Young, a UCLA professor of geochemistry and cosmochemistry. “Our one-of-a-kind Panorama mass spectrometer allows us to see this for the first time. We conducted experiments showing that the only way for this excess of 15N15N to occur is by rare reactions in the upper atmosphere. Two percent is a huge excess.”

Young said the enrichment of 15N15N in Earth’s atmosphere is a signature that’s unique to our planet. “But it also gives us a clue about what signatures of other planets might look like, especially if they are capable of supporting life as we know it.”

The research is published in the journal Science Advances.

“We didn’t believe the measurements at first, and spent about a year just convincing ourselves that they were accurate,” said lead author Laurence Yeung, an assistant professor of Earth, environmental and planetary sciences at Rice University. 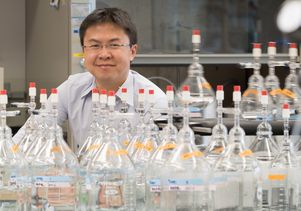 “At that time, no one had a way to reliably quantify 15N15N,” said Yeung, who joined Rice’s faculty in 2015. “It has an atomic mass of 30, the same as nitric oxide. The signal from nitric oxide usually overwhelms the signal from 15N15N in mass spectrometers.”

The difference in mass between nitric oxide and 15N15N is about two one-thousandths the mass of a neutron. When Yeung learned that the new machine in Young’s laboratory could discern this slight difference, he applied for grant funding from the National Science Foundation to learn exactly how much 15N15N is in the Earth’s atmosphere.

Co-authors Joshua Haslun and Nathaniel Ostrom at Michigan State University conducted experiments on N2-consuming and N2-producing bacteria that allowed the team to determine their 15N15N signatures.

These experiments suggested that one should see a bit more 15N15N in air than random pairings of nitrogen-14 and nitrogen-15 would produce — an enrichment of about 1 part per 1,000, Yeung said.

“There was a bit of enrichment in the biological experiments, but not nearly enough to account for what we’d found in the atmosphere,” Yeung said. “In fact, it meant that the process causing the atmospheric 15N15N enrichment has to fight against this biological signature. They are locked in a tug-of-war.”

The team found that zapping mixtures of air with electricity, which simulates the chemistry of the upper atmosphere, could produce enriched levels of 15N15N like they measured in air samples.

The researchers tested air samples from ground level and from altitudes of about 20 miles, as well as dissolved air from shallow ocean water samples.

“We think the 15N15N enrichment fundamentally comes from chemistry in the upper atmosphere, at altitudes close to the orbit of the International Space Station,” Yeung said. “The tug-of-war comes from life pulling in the other direction, and we can see chemical evidence of that. We can see the tug-of-war everywhere.”

Co-authors are Issaku Kohl and Edwin Schauble of UCLA; Huanting Hu of Rice; Shuning Li, formerly of UCLA and Rice and now with Peking University in Beijing; and Tobias Fischer of the University of New Mexico.

The research was supported by the National Science Foundation, the Deep Carbon Observatory and the U.S. Department of Energy’s Great Lakes Bioenergy Research Center.