An average of 30 years had passed since the traumatic events that had left them depressed, anxious, irritable, hypervigilant, unable to sleep well and prone to nightmares.

But for 12 people who were involved in a UCLA-led study — survivors of rape, car accidents, domestic abuse and other traumas — an unobtrusive patch on the forehead provided considerable relief from post-traumatic stress disorder.

“We’re talking about patients for whom illness had almost become a way of life,” said Dr. Andrew Leuchter, the study’s senior author, a UCLA professor of psychiatry and director of the neuromodulation division at UCLA’s Semel Institute for Neuroscience and Human Behavior. “Yet they were coming in and saying, ‘For the first time in years I slept through the night,’ or ‘My nightmares are gone.’ The effect was extraordinarily powerful.”

The research, which has been presented at three scholarly conferences and published in the journal Neuromodulation: Technology at the Neural Interface, revealed the first evidence that trigeminal nerve stimulation, or TNS, holds promise for treating chronic PTSD.

“Most patients with PTSD do get some benefit from existing treatments, but the great majority still have symptoms and suffer for years from those symptoms,” said Leuchter, who is also a staff psychiatrist at the VA Greater Los Angeles Healthcare System. “This could be a breakthrough for patients who have not been helped adequately by existing treatments.”

Based on the study, which was conducted primarily with civilian volunteers, the scientists are recruiting military veterans, who are at an even greater risk for PTSD, for the next phase of their research.

TNS is a new form of neuromodulation, a class of treatment in which external energy sources are used to make subtle adjustments to the brain’s electrical wiring — sometimes with devices that are implanted in the body, but increasingly with external devices. The approach is gaining popularity for treating drug-resistant neurological and psychiatric disorders. 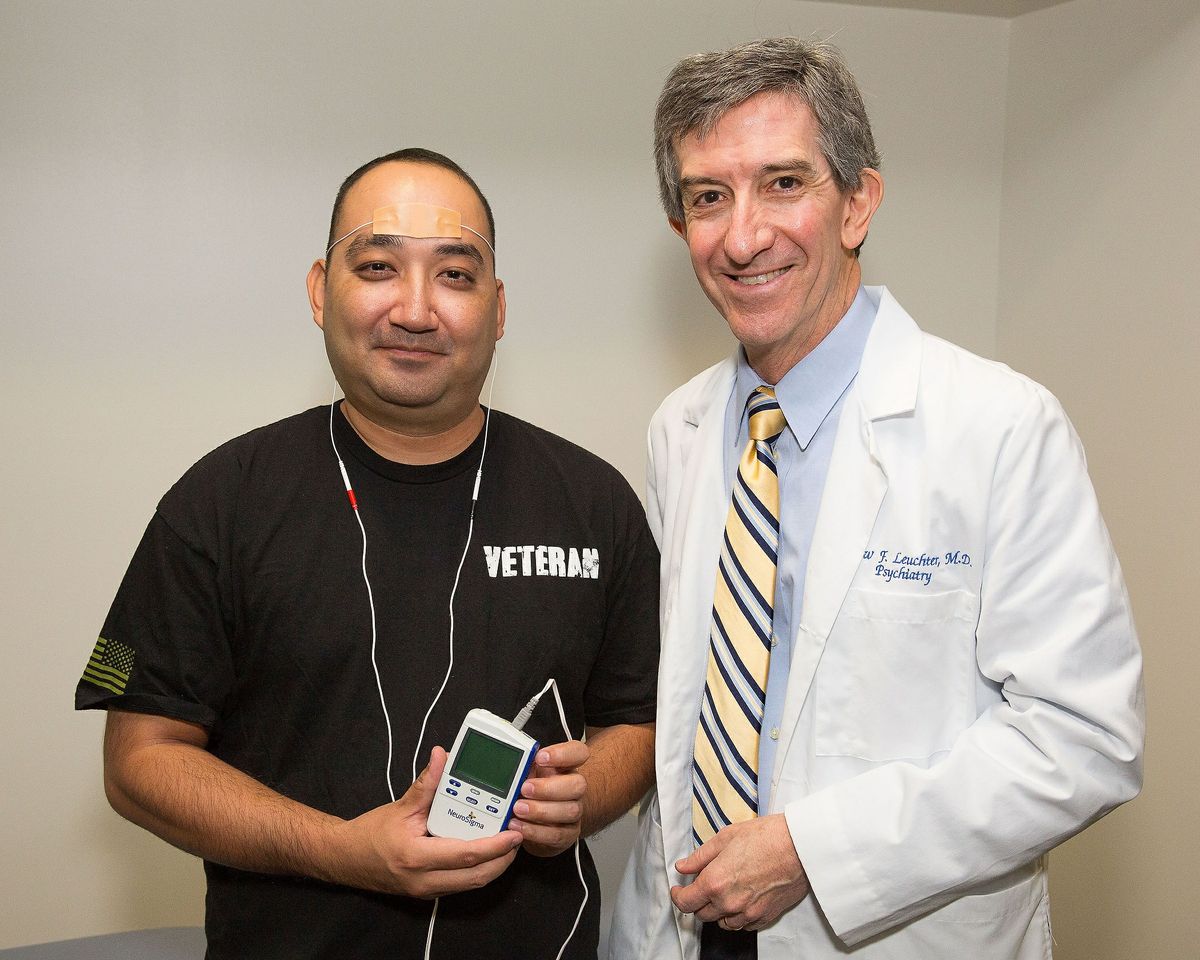 TNS harnesses current from a 9-volt battery to power a patch that is placed on the user’s forehead. While the person sleeps, the patch sends a low-level current to cranial nerves that run through the forehead, sending signals to parts of the brain that help regulate mood, behavior and cognition, including the amygdala and media prefrontal cortex, as well as the autonomic nervous system. Prior research has shown abnormal activity in those areas of the brains of PTSD sufferers.

“The chance to have an impact on debilitating diseases with this elegant and simple technology is very satisfying,” said Dr. Ian Cook, the study’s lead author.

Cook co-invented TNS at UCLA; now on leave from his faculty position, he is serving as chief medical officer at Los Angeles-based Neurosigma, Inc., which is licensing the technology and funding the research. Neurosigma is already marketing the technology overseas and has plans to make it available to patients in the U.S.

PTSD affects approximately 3.5 percent of the U.S. population but a much higher proportion of military veterans. An estimated 17 percent of active military personnel experience symptoms, and some 30 percent of veterans returning from service in Iraq and Afghanistan have had symptoms.

Sufferers often have difficulty working with others, raising children and maintaining healthy relationships. Many try to avoid situations that could trigger flashbacks, which makes them reluctant to socialize or venture from their homes, leaving them isolated. People with the disorder are six times more likely than their healthy counterparts to commit suicide, and they have an increased risk for marital difficulties and dropping out of school.

For the recently completed study, the researchers recruited people with chronic PTSD and severe depression who were already being treated with psychotherapy, medication or both. While continuing their conventional treatment, the volunteers wore the patch while they slept, for eight hours a night. Before and after the eight-week study, the study subjects completed questionnaires about the severity of their symptoms and the extent to which the disorders affected their work, parenting and socializing.

Leuchter is working with the VA Greater Los Angeles Healthcare System to recruit 74 veterans who have served in the military since 9/11 for the study’s next phase. Half will receive real treatment and half will be given a fake TNS patch, in the way a placebo pill would be used in a drug trial. At the end of the study, subjects who were using the fake patch will have the option of undergoing treatment with an actual TNS system.

TNS treatment has been shown to be effective in treating drug-resistant epilepsy and treatment-resistant depression.

“PTSD is one of the invisible wounds of war,” Cook said. “The scars are inside but they can be just as debilitating as visible scars. So it’s tremendous to be working on a contribution that could improve the lives of so many brave and courageous people who have made sacrifices for the good of our country.”