An enormous young planet approximately 300 light-years from Earth has given astrophysicists a rare glimpse into planetary evolution.

The planet, known as HD 106906b, was discovered in 2014 by a team of scientists from the U.S., the Netherlands and Italy. It is 11 times the mass of Jupiter and is extremely young by celestial standards — not more than 13 million years old, compared with our solar system’s 4.6 billion years.

“This is such a young star; we have a snapshot of a baby star that just formed its planetary system — a rare peek at the final stage of planet formation,” said Smadar Naoz, a UCLA assistant professor of physics and astronomy, and a co-author of the study.

Another of the planet’s unusual characteristics is its distance from its star. Astronomers believe that the vast majority of planets outside of our solar system exist inside a vast dusty disk of debris relatively close to the center of the solar system. But HD 106906b is far beyond its solar system’s disk — so far away that it takes 1,500 years for the planet to orbit its star. HD 106906b is currently at least 650 times as far from its star as the Earth is from our sun.

“Our current planet formation theories do not account for a planet beyond its debris disk,” Naoz said. 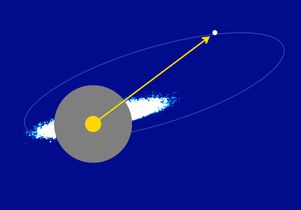 The study’s lead author is Erika Nesvold, a postdoctoral fellow at the Carnegie Institution for Science whom Naoz mentors. She wrote software called Superparticle-Method Algorithm for Collisions in Kuiper belts and debris disks, or SMACK, that allowed the researchers to create a model of the planet’s orbital path — a critical step because HD 106906b orbits so slowly that the researchers can barely see it move.

The research, published online in the Astrophysical Journal Letters, suggests that the planet formed outside the disk, where it’s visible it today, as opposed to having been formed inside the debris disk and then having been thrust far beyond it.

Naoz said that conclusion helps explain the shape of the debris disk. “It works perfectly,” she said.

The debris disk was photographed in 2016 by American and European astronomers. According to Naoz, the disk is an analog to our solar system’s Kuiper belt — an enormous cluster of small bodies like comets and minor planets located beyond Neptune.

The researchers don’t know if there are additional planets inside the disk, but using Nesvold’s software — which also been used to study other debris disks in the universe — they were able to re-create the shape of the disk without adding another planet into the model, as some astronomers had thought would be required.

Debris disks are composed of gas, dust and ice, and they play a key role in the formation of planets. Typically, Naoz said, planets form after a gas cloud collapses due to its own gravity, forming a disk — where planets are created — and a star. As the gas slowly evaporates, the dust and debris rotate and collide around the young star until gravity pushes them away, forming a structure like our solar system’s Kuiper belt.

“In our solar system, we’ve had billions of years of evolution,” said Michael Fitzgerald, UCLA associate professor of physics and astronomy, and the study’s other co-author. “We’re seeing this young system revealed to us before it has had a chance to dynamically mature.”

Naoz said the researchers’ conclusions do not require any exotic physics or hidden planets to explain them, which is not always the case in studying other solar systems.

“There are no assumptions; this is just physics,” she said.

Naoz’s research was funded by a research fellowship from the Alfred P. Sloan Foundation. Nesvold’s was supported by a Carnegie Department of Terrestrial Magnetism postdoctoral fellowship.