That “Solid Gold Sound” you’ll hear on Grammy award-winning band Muse’s latest album comes from none other than the UCLA Bruin Marching Band. In the super deluxe edition of “Simulation Theory,” the English rock band’s eighth studio album that was released Nov. 9, the Bruins are featured on a bonus track of the song “Pressure.” The song was recorded at UCLA in the studio in the Evelyn and Mo Ostin Music Center at the Herb Alpert School of Music in June. 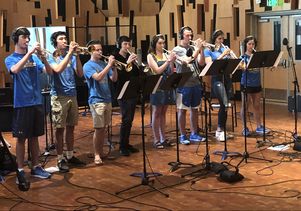 “When I saw Muse perform at the Staples Center, I couldn’t have imagined that I would someday have the opportunity to arrange a song for this iconic group and prepare it for recording on one of their albums,” said Henderson, who has directed the band since 1982. “It was a pressure-packed yet highly rewarding experience that I will always remember as a highlight of my career at UCLA.”

“I always felt like ‘Pressure’ would sound great with a big marching band,” Bellamy said. “I loved the 2010 UCLA halftime show where they did an entire set of Muse songs, so when we were looking for a band for this version, right away we reached out to Gordon to see if the band was interested. We had a great day with all the musicians in the studio and hearing it all come to life.”

The UCLA Bruin Marching Band plays “Pressure” in a concert after the UCLA versus Arizona football game at the Rose Bowl on Oct. 20.

Bruin band members worked on the music for about a week before the session, but they had no idea who the recording was for until they arrived at the studio.

“When I found out it was Muse, I was in complete shock and was super ecstatic about the whole experience,” trombonist Matthew Espinoza said. “The music was really fun and I am forever grateful.”

Laila Sathe, a trumpet player, said “I think it’s awesome that a band as popular as Muse wanted to record an alternate version of one of their tracks with a marching band, and we were so lucky to have been asked to do it. The first time the whole band played the song together, we knew it was going to be a hit.”

In addition to the super deluxe edition of “Simulation Theory,” “Pressure” can be heard on Spotify, and the band’s version of the song has already been heard on several broadcasts for the National Football League, the Major League Baseball playoffs, and college football. 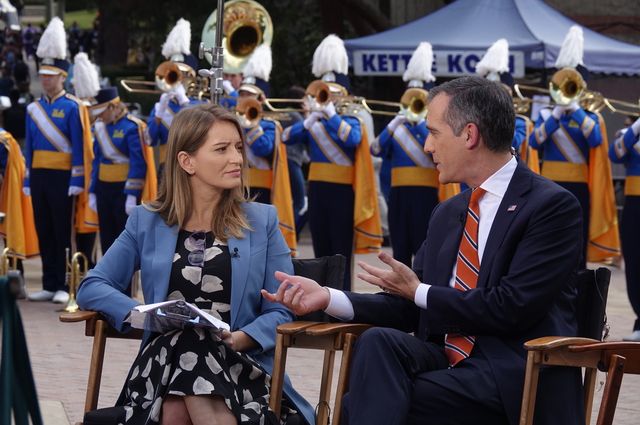 The UCLA Bruin Marching Band has been seen or heard in numerous TV shows, movies and videos over the years. Here are just a few:

Read more about their appearances at the UCLA Bruin Marching Band website.