Invasive red swamp crayfish are a serious problem in the Santa Monica Mountains and other parts of Southern California. They devastate native wildlife, including threatened species such as the California red-legged frog, throwing off the natural balance of ecosystems.

They also pose a threat to people, according to a new paper in the journal Conservation Biology. The study is based on field research in the Santa Monica Mountains and lab experiments at UCLA La Kretz Center for California Conservation Science.

Mosquitos are notorious vectors that spread diseases such as malaria, Zika and West Nile virus. In the mountains, mosquito populations are kept in check by dragonfly nymphs, which voraciously consume their aquatic larvae. But invasive crayfish disrupt that predator-prey relationship, killing and driving dragonfly nymphs from waterways. And while crayfish also consume mosquito larvae, they’re simply not as good at it, the researchers found. 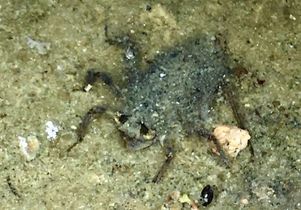 “A lot of people don’t know this but before dragonflies are flying around and beautiful, they actually are these voracious predators in streams and ponds,” said Gary Bucciarelli, a UCLA conservation biologist and the paper’s lead author. “They do a great job of preying on other invertebrates in the streams we work on.”

After noticing that streams with the crayfish had almost no dragonfly nymphs and lots of mosquito larvae, Bucciarelli and other scientists decided to investigate further. They looked at 13 streams in the Santa Monica Mountains.

“The dragonfly nymphs don’t know what to do with crayfish,” Bucciarelli said. “We observed strange behaviors. They were even resting on their claws. The presence of crayfish disrupts their behavior and essentially turns them into worthless predators.”

The findings have implications beyond Southern California. The red swamp crayfish is a globally invasive species that affects every continent except Antarctica. In many locations, Bucciarelli said, the crayfish harm entire ecosystems by disrupting patterns of predators and prey — just as they do with dragonfly nymphs and mosquito larvae.

The Las Virgenes–Triunfo Joint Powers Authority, which provides wastewater services, recycled water and other services within the Malibu Creek watershed, partnered with UCLA, Pepperdine University and Mountains Restoration Trust on today’s research. The project is part of a long-term effort to understand the invasive crayfish and eliminate or reduce their numbers as much as possible. The original intent was to protect endangered and threatened species, but today’s findings reveal a human impact that hasn’t previously been examined, said Robert Fisher, a U.S. Geological Survey research biologist and co-author of the study. 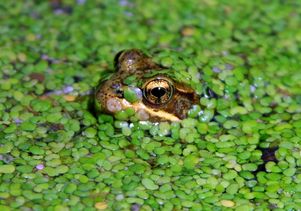 “We recovered five miles of Malibu watershed. Just by removing the crayfish, not doing anything else, red-legged frogs are returning to their natural habitat,” Fisher said. “Not everyone cares about that response, but they care about the human health aspects — preventing malaria, encephalitis and dengue fever.”

Climate change appears to be making the problem worse, Fisher added. The red swamp crayfish comes from places in the Southeast United States that are hot or at least warm all year long. As temperatures increase with global warming, local habitat becomes more suitable to the pests.

Brad Shaffer, a UCLA conservation biologist and director of the La Kretz Center, said today’s research is part of a larger effort to work across disciplines to address environmental problems.

“We blend field conservation biology, human health and the role of invasive species,” Shaffer said. “It’s what conservation biology should be — undergraduate students, wildlife professionals, government biologists and university researchers coming together to figure out how species fit together in our human-modified world.”