The UCLA Institute of the Environment and Sustainability presented the 2018 Pritzker Emerging Environmental Genius Award to 24-year-old entrepreneur Miranda Wang and BioCellection, the company she co-founded.

Wang invented a method for breaking down multiple types of shredded plastic waste in a way that is cheaper and more than sustainable than current alternatives, which could help reduce the amount of plastic polluting the environment.

The annual award carries a prize of $100,000, which is funded as part of a $20 million gift to UCLA from the Anthony and Jeanne Pritzker Family Foundation. It is the field’s first major honor for innovators under the age of 40 — those whose work stands to benefit most from the prize money and the prestige it conveys.

In receiving the award, which was presented Nov. 14 at UCLA’s Hershey Hall, Wang said the prize money will help BioCellection complete research and development that will enable the company to implement its invention all over the world.

“I want to thank Tony and Jeanne Pritzker and UCLA for considering us for this prestigious award, which could help us surpass our last technical hurdle before moving across the finish line,” she said.

According to UNESCO, over 220 million tons of plastic is produced globally every year, and less than one-fifth of it gets recycled. And although plastics are used in everything from medical devices to football helmets, 40 percent goes to packaging that is discarded after one use. Much ends up as pollution, including 18 billion pounds of plastic that flows into oceans each year from coastal regions, harming both wildlife and people.

To stem that tide, Wang and her BioCellection co-founder, Jeanny Yao, spent the past decade — dating back to a high school recycling club meeting in Vancouver, Canada — exploring possible solutions. Their invention is a process that breaks the chemical bonds between plastic molecules, turning plastic that would otherwise be nonrecyclable into chemicals that are worth thousands of dollars per ton. Their work was covered earlier in 2018 by CNN and the New York Times. 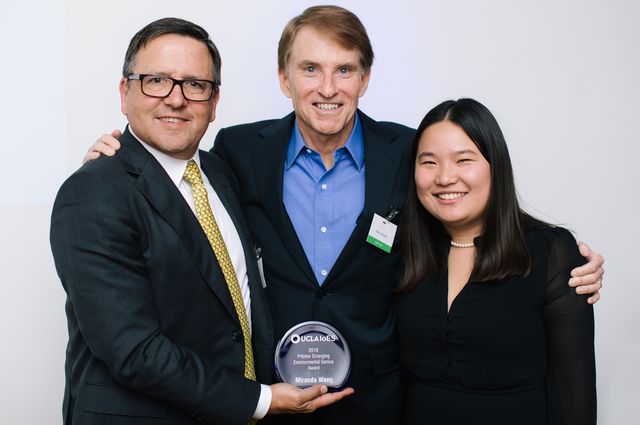 BioCellection is currently working with municipal leaders and private waste management firms in the San Francisco area to scale up. By 2023, Wang and her colleagues expect the company to be recycling 63,000 metric tons of plastic waste per year. That total would eliminate 390,000 metric tons of carbon dioxide emissions by replacing the need for oil-derived petrochemicals, an ingredient in plastics.

“We are providing a service to process this material at a price that is comparable to [the cost of sending it to] landfills,” Wang said during a video interview with UCLA.

Now based in Menlo Park, California, Wang earned a bachelor’s degree in molecular and cell biology from the University of Pennsylvania. She plans to use the award money to refine the company’s methods so that the end products of the chemical process are at an even higher purity level. That change would enable BioCellection to secure multimillion-dollar recycling contracts.

“This technology can become the pillar of what would enable people around the world to mine landfills for plastics as a new carbon source,” Wang said. “We don’t have to drill for oil anymore to make the things around us.”

Wang was chosen from 20 candidates nominated by an international group of environmental leaders. After three finalists were selected by a panel of UCLA faculty, Wang was chosen as the winner by four distinguished judges: author and news commentator Van Jones, philanthropists Wendy Schmidt and Nicolas Berggruen, and Kathryn Sullivan, former head of the National Oceanic and Atmospheric Administration and the first American woman to walk in space.

“None of us has any success on our own,” Peter Kareiva, director of Institute of the Environment and Sustainability, said at the award ceremony. “Geniuses don’t have success on their own. This award recognizes that.”