California Professor of the Year Neil Garg, who has been getting large numbers of UCLA students to love organic chemistry for years, has been selected as one of three finalists for the Robert Foster Cherry Award for Great Teaching, given by Baylor University once every two years. The award honors outstanding professors who are extraordinary, inspiring teachers with a positive, long-lasting effect on students and a record of distinguished scholarship.

He has won many awards for his teaching and research, including UCLA’s Eby Award for the Art of Teaching and BruinWalk.com’s Professor of the Year. Many of his students have said he is the best professor they have ever had and ever expect to have, and that he has instilled in them a love of organic chemistry — a subject many students dread.

One of his latest teaching initiatives is a set of interactive online tutorials he has developed that combine real-life examples of organic chemistry, human health and popular culture — making organic chemistry relevant and important to students. Garg calls it BACON — Biology And Chemistry Online Notes — and he has made it available to professors and educators worldwide. 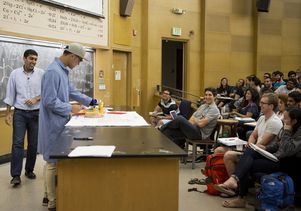 Garg will present a lecture at Baylor and at UCLA this fall. Baylor will announce the 2018 recipient in spring of next year. Robert Foster Cherry, who enrolled in the Baylor Law School in 1932, made a bequest in his estate to establish the award to recognize outstanding teachers and bring them in contact with Baylor University students. The first Robert Foster Cherry Award was presented in 1991.

Garg, a professor of chemistry, said he is deeply honored to be a finalist and looks forward to meeting with students and faculty members at Baylor this fall. The two other finalists are Heidi Elmendorf, associate professor of biology at Georgetown University, and Clinton Longenecker, distinguished university professor of leadership at the University of Toledo.

Garg has said the field of organic chemistry has made a tremendous mistake in not conveying to students and the general public its importance, and the impact it has on our lives.

Garg is completely revamping UCLA’s organic chemistry laboratories for chemistry majors. Starting from scratch, he and his colleagues Lucas Morrill and Jacquelin Kammeyer developed a new curriculum that is challenging, relevant and fun, and taught in a supportive environment. Every lecture and corresponding laboratory have a theme, such as biotechnology or cosmetics and perfumes.

As a result of Garg’s innovative teaching techniques, he is able to present students with extraordinarily difficult concepts and problems, which his students can master and solve.

One of his students, Christine Nguyen, said, “I feel like Sherlock Holmes when solving retrosynthesis problems.” Another, Aaron Lalehzarian, said his friends told him how difficult organic chemistry is, but Garg taught him, “It's not impossible. It's not even that hard. It's logical.” Another undergraduate, Kian Samadian, said, “Neil is the most passionate person about what he does I’ve ever met. He’s easily the best professor I’ve ever had, and the best I probably ever will have.”

Garg and his family live in a campus residence hall as part of UCLA’s faculty-in-residence program, which allows him to eat meals with students, advise them, go on field trips with them and inspire them daily with his passion for chemistry.

Garg shared his teaching secrets in this 20-minute TEDxUCLA talk.