Researchers from the California NanoSystems Institute at UCLA have created a new technique that greatly enhances digital microscopy images.

The development is significant because digital imagery has led to many advances in microscopy, but digital microscopic imaging can sometimes result in blurry, pixelated images.

The new technique is called wavelength scanning pixel super-resolution. It uses a device that captures a stack of digital images of the same specimen, each with a slightly different wavelength of light. Then, researchers apply a newly devised algorithm that divides the pixels in each captured image into a number of smaller pixels, resulting in a much higher-resolution digital image of the specimen.

The research team was led by Aydogan Ozcan, Chancellor’s Professor of Electrical Engineering and Bioengineering at the UCLA Henry Samueli School of Engineering and Applied Science. The study appears in the journal Light: Science and Applications, which is published by the Nature Publishing Group.

“These results mean we can see and inspect large samples with finer details at the sub-micron level,” Ozcan said. “We have applied this method to lens-based conventional microscopes, as well as our lensless on-chip microscopy systems that create microscopic images using holograms, and it works across all these platforms.”

The benefits of this new method are wide-ranging, but especially significant in pathology, where rapid microscopic imaging of large numbers of tissue or blood cells is key to diagnosing diseases such as cancer. The specimens used in the study were blood samples, used to screen for various diseases, and Papanicolaou tests, which are used to screen for cervical cancer.

Ozcan said that wavelength scanning super-resolution works on both colorless and dye-stained samples. The entire apparatus fits on a desktop, so its size and convenience could be of great benefit to doctors and scientists using microscopes in resource-limited settings such as clinics in developing countries.

The first author of the study was UCLA graduate student Wei Luo; the other authors were graduate students Yibo Zhang and Alborz Feizi and postdoctoral scholar Zoltan Gorocs. 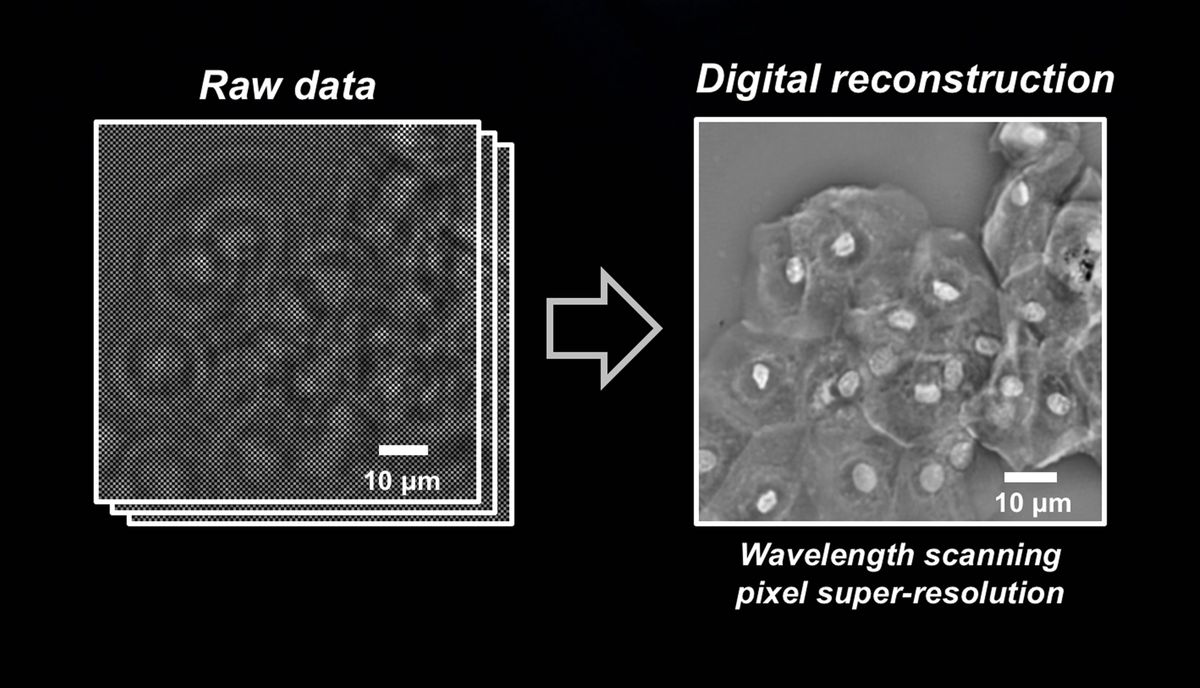 Some experiments for this research were conducted at the Nano and Pico Characterization Lab at the California NanoSystems Institute at UCLA.

The research was supported by the Presidential Early Career Award for Scientists and Engineers, the Army Research Office, the National Science Foundation, the Office of Naval Research and the Howard Hughes Medical Institute.