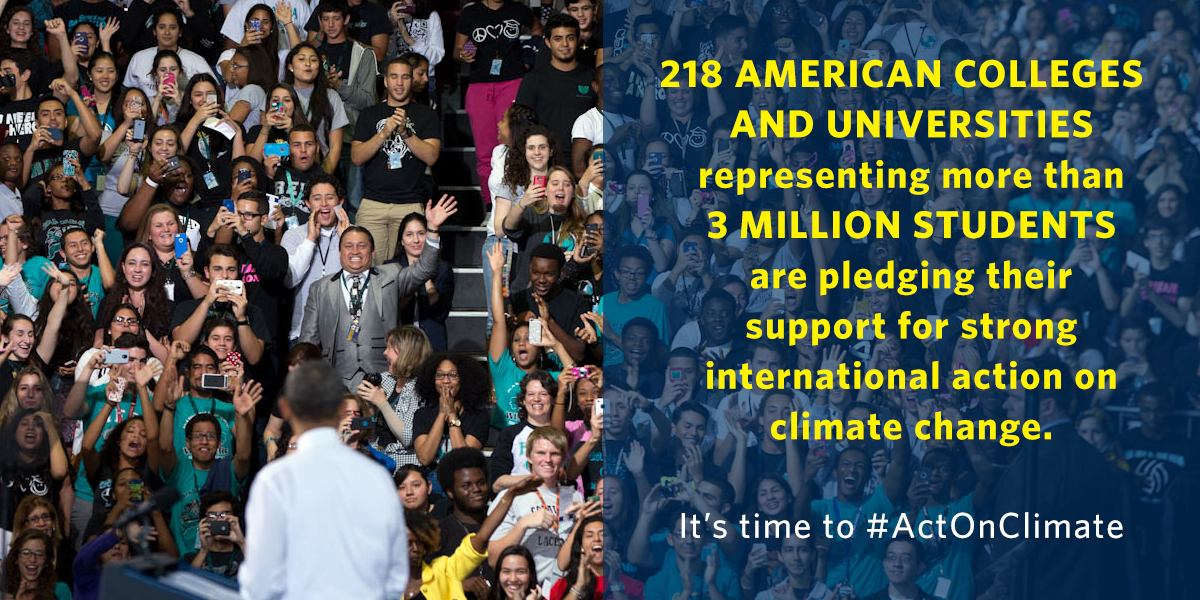 White House
UCLA and the UC system joined the White House and universities around the country today in pledging to take their own decisive action on climate change.

To demonstrate support for strong climate action by world leaders in Paris at the upcoming U.N.Conference on Climate Change, UCLA Chancellor Gene Block and the UC system joined the White House and universities around the country today in pledging to take their own decisive action on climate change.

The pledge, part of the first White House American Campuses Act on Climate day-of-action, seeks to amplify the voice of the higher education community across the U.S. and the important role it can play in the transition to a sustainable, carbon-neutral future.

The pledge urges world leaders to produce an ambitious agreement to combat climate change at the upcoming COP-21 United Nations Climate Conference in Paris, but is also a commitment to take local action, no matter what happens at the Paris talks. Pledge signers agreed to accelerate their transition to low-carbon energy while promoting sustainable practices across their campuses.

Pledging to combat climate change was no stretch for UCLA. UCLA and UC already independently committed to climate change and sustainability measures that go well beyond the promises in the pledge. By 2025, UC is committed to emitting zero net greenhouse gases, becoming the first major university system to achieve carbon neutrality, and has pledged to invest at least $1 billion of the university’s endowment and pension funds over the next five years in solutions to global climate change, as part of the White House’s Clean Energy Investment Initiative.

“UCLA and UC’s Carbon Neutrality Initiative builds on our pioneering work on climate research and furthers its leadership in sustainable business practices,” Block said in the UCLA pledge. “UCLA has also launched the Sustainable L.A. Grand Challenge, building on the President’s call for Grand Challenges — a novel and ambitious campus-wide research endeavor aimed at tackling sustainability in the Los Angeles region.”