Alexander Patananan
The process of transferring mitochondria between cells using the nanoblade technology.

A UCLA-led team of researchers has demonstrated a new method to conduct research on mitochondrial DNA diseases — a broad group of debilitating genetic disorders that can affect the brain, heart and muscles.

The new method, which utilizes a technology developed by UCLA researchers that opens holes in the cell membrane, is described in a study published today in Cell Metabolism. The researchers say that it could pave the way for specific research on how and why these diseases occur, and point to pathways to develop treatments.

Mitochondria, often referred to as the cell’s “energy powerhouse,” are small organelles that reside inside a cell’s cytoplasm but outside the nucleus. They convert food into energy and building blocks for cells in a process known as metabolism.

Mutations in mitochondrial DNA, or mtDNA, can cause devastating diseases that mainly affect tissues and cells with high-energy demands. One of the best known mtDNA diseases is Leber’s hereditary optic neuropathy, which can cause sudden and profound loss of central vision. Because mitochondria in humans are maternally inherited, mtDNA diseases can be passed from an unaffected mother to her children.

“Although specific mtDNA diseases are rare, the collective prevalence of mtDNA diseases from all types of mtDNA mutations is estimated to be 1 in 5,000 individuals,” said Dr. Michael Teitell, director of basic and translational research in the Jonsson Comprehensive Cancer Center at UCLA and the study’s co-lead author.

In an accompanying article on the future of the field, also published in the same journal, Teitell wrote that “our new approach for mitochondrial transfer into cells could open new possibilities for understanding how specific mtDNA mutations alter cell metabolism and potentially provide a way forward in treating specific mtDNA diseases”.

According to the researchers, mitochondria with healthy mtDNA could be delivered into cells with damaged mtDNA, this could dramatically reduce a disease’s effects, or possibly eliminate it. 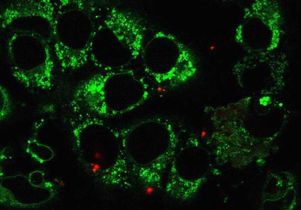 To begin to address these and other complex issues surrounding mtDNA alterations, UCLA researchers, led by Teitell and Pei-Yu (Eric) Chiou, professor of mechanical and aerospace engineering at the UCLA Henry Samueli School of Engineering and Applied Science, collaborated on a new precision cutting tool.

The tool, a “photothermal nanoblade,” opens holes in the outer membrane of a cell to enable pressurized delivery of desired contents, in this case healthy mitochondria, into the cell cytoplasm.

“Our photothermal nanoblade can open a micron-sized pore through a cell membrane by utilizing an ultrafast laser-induced cavitation bubble for precision cutting,” Chiou said. “This process keeps cells alive as the nanoblade tool never enters the cell. So, we can achieve a very high efficiency in the delivery of large-sized, slow-diffusing cargo, such as mitochondria.”

Additionally, Chiou and Teitell are engineering an approach that incorporates the nanoblade into a high-throughput system that could deliver desired cargo, such as mitochondria, into as many as 100,000 cells per minute.

The research paper’s first authors are Ting-Hsiang Wu, Enrico Sagullo and Dana Case, who were trainees affiliated with the department of pathology and laboratory medicine in the David Geffen School of Medicine at UCLA. Additional study authors include Yanjing Li, Jason Hong, Tara TeSlaa, Alexander Patananan, Daniel Braas, Carla Koehler and Thomas Graeber, all from UCLA; Xin Zheng, who was a UCLA researcher at the time; J. Michael McCaffery of Johns Hopkins University; and Kayvan Niazi of NantWorks in Culver City, California.

The research was made possible with support from a UC Discovery award, and by the Air Force Office of Scientific Research, National Institutes of Health, the National Science Foundation, California Institute for Regenerative Medicine, the Prostate Cancer Foundation, the Eli and Edythe Broad Center of Regenerative Medicine and Stem Cell Research at UCLA, the American Cancer Society, the Melanoma Research Alliance, the National Center for Advancing Translational Sciences, and NantWorks.