More than 30 percent of Americans will experience an anxiety disorder at some time in their lives. A new research center at UCLA will be dedicated to increasing our understanding of the brain and learning how to help the brain recover when those, and other malfunctions, occur.

The formation of the Staglin Family Music Festival Center for Brain and Behavioral Health, which is scheduled to open July 1, was announced today by UCLA Life Sciences Dean Victoria Sork. Michael Fanselow, distinguished professor of psychology in the UCLA College, was appointed its director.

Genetic risk factors, combined with environmental experiences, can cause the brain to malfunction. The center’s researchers will seek to discover what those changes are and develop novel methods to address them.

“The center will focus on brain health and will develop novel methods to get the unhealthy brain back to the healthy state,” said Fanselow, who also holds a UCLA faculty appointment in psychiatry.

Fanselow said anxiety disorders are generally chronic and do not go away on their own. Some of these disorders, like post-traumatic stress, are devastating.

Fanselow’s research addresses fear, memory and anxiety disorders, including how traumatic memories lead to post-traumatic stress disorder, anxiety disorders and depression. He has studied how fear works in the brain using rats and mice, whose fear systems work in remarkably similar ways to that of humans.

Fear serves an important function: to protect us from danger.

“When we’re in danger, it’s really adaptive to be afraid. When we’re not in danger, it’s adaptive not to be afraid,” Fanselow said. “But we can make mistakes. One mistake is when there’s true danger and I don’t defend myself. The other mistake, which is much less costly, is when there’s no danger and I do become afraid. That’s an anxiety disorder.”

Fanselow’s laboratory is identifying and learning about the brain circuits that give rise to inappropriate fear, with the goals of reducing — or even eliminating — unnecessary fear, while preserving healthy fear.

Fanselow also was appointed to the Staglin Family Chair in Psychology.

“We are delighted to have such a prominent scientist assume our Staglin Family Chair and the leadership of the Staglin Center,” said Shari Staglin.

Garen Staglin said, “UCLA is among the leading institutions studying brain health, and we applaud its approach to campus-wide collaborations to accelerate the science of the brain and resultant treatments.”

Getting the brain back to where it should be

Psychology and psychiatry professor Michelle Craske, an expert on fear and anxiety disorders, will be associate director of the center, which is being funded by the family of Shari and Garen Staglin through the Staglin Family Music Festival for Brain Health and their philanthropic organization, the International Mental Health Research Organization.

Fanselow and Craske are currently studying whether cognitive behavior therapy, combined with a pharmaceutical called scopolamine, will help suppress fear in people with anxiety. In cognitive behavior therapy, people with anxiety disorders are repeatedly exposed to the object or situation they fear, in a non-threatening environment, and eventually they learn not to be afraid.

Fanselow and colleagues reported in 2013 that at the right dose, scopolamine — which has been used to treat including nausea, motion sickness, depression and other conditions — might also be useful in treating anxiety disorders.

“UCLA and the UCLA College are extremely grateful to Shari and Garen Staglin and their family, for their extremely deep and long-standing commitment to fighting mental illness, and their generosity over many years to UCLA and the College,” Sork said.

The center will also provide seed money to interdisciplinary teams of scholars to advance our understanding of many areas in brain health, ranging from depression to memory loss to schizophrenia. 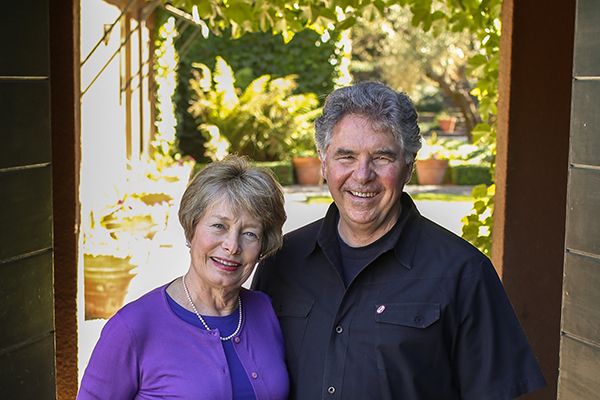 Garen Staglin, a UCLA alumnus and private equity investor, is co-chair of the $4.2 billion Centennial Campaign for UCLA. His wife, Shari, a UCLA alumna, has been a director of the UCLA Foundation and a member of UCLA’s Women and Philanthropy. The Staglins own the acclaimed Staglin Family Vineyard in Napa Valley. Shari Staglin is the vineyard’s CEO and the Staglins’ daughter, Shannon, also a UCLA alumna, is president.

The Staglins became active in supporting mental health research and treatment after their son, Brandon, was diagnosed with schizophrenia. Brandon has since graduated with honors from Dartmouth and is currently marketing communications director for both the Staglin Family Vineyard and IMHRO. He also is a member of the joint board of directors of IMHRO and One Mind.

The Staglins raise funds for brain health charities and research through a variety of major events including The Music Festival for Brain Health. All of the music festival’s expenses are underwritten by its sponsors, and all proceeds go to scientific research. They also serve as founders and board members of One Mind, where Garen is co-chairman.