Besides the atoms that make up our bodies and all of the objects we encounter in everyday life, the universe also contains mysterious dark matter and dark energy. The latter, which causes galaxies to accelerate away from one another, constitutes the majority of the universe’s energy and mass.

Ever since dark energy was discovered in 1998, scientists have been proposing theories to explain it — one is that dark energy produces a force that can be measured only where space has a very low density, like the regions between galaxies.

Paul Hamilton, a UCLA assistant professor of physics and astronomy, reproduced the low-density conditions of space to precisely measure this force. His findings, which helped to reveal how strongly dark energy interacts with normal matter, appear Aug. 21 in the online edition of the journal Science.

Hamilton’s research focuses on the search for specific types of dark energy fields known as “chameleon fields,” which exhibit a force whose strength depends on the density of their surrounding environment. This force, if it were proven to exist, would be an example of a so-called “fifth force” beyond the four known forces of gravity, electromagnetism, and the strong and weak forces acting within atoms.

But this fifth force has never been detected in laboratory experiments, which prompted physicists to propose that when chameleon fields are in dense regions of space — for example, the Earth’s atmosphere — they shrink so dramatically that they become immeasurable. 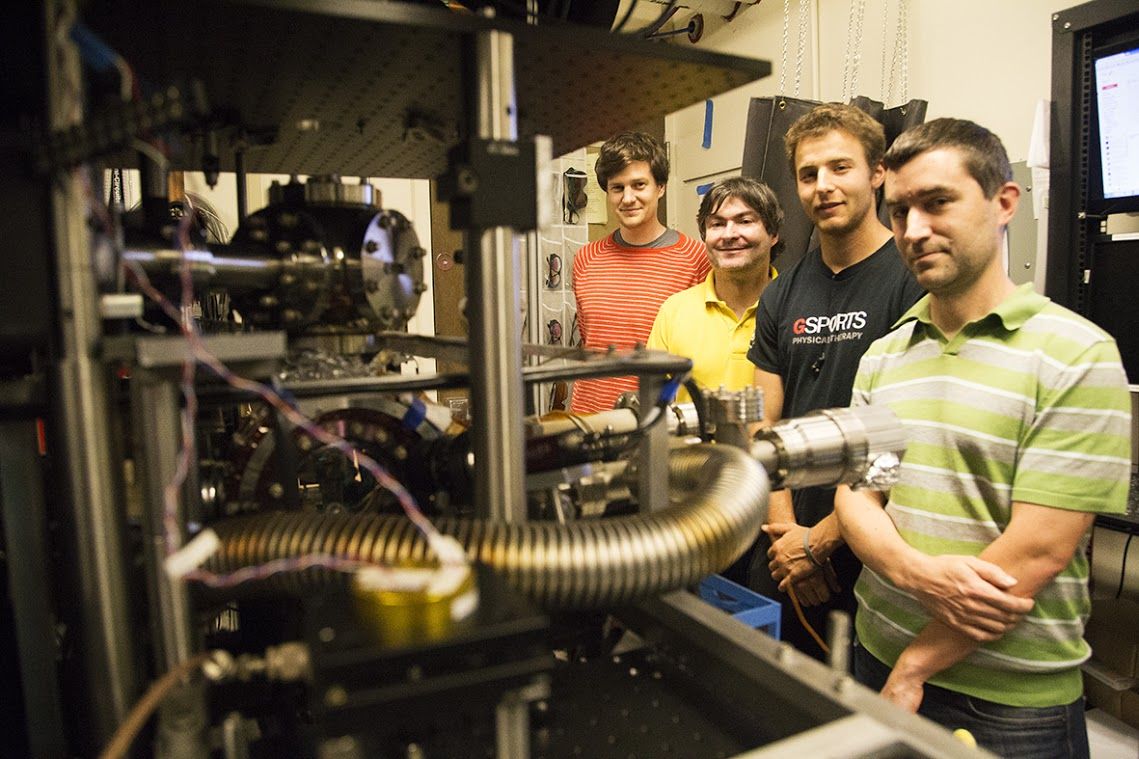 Chameleon fields were first hypothesized in 2004 by Justin Khoury, a University of Pennsylvania physicist and co-author of the Science paper, but it wasn’t until 2014 that English physicist Clare Burrage and colleagues proposed a methodology for testing their existence in a laboratory using atoms.

At the time, Hamilton was a postdoctoral researcher in the UC Berkeley laboratory of Holger Müller. His team already had a head start on investigating chameleon fields: They had independently developed an experiment using atoms to measure small forces.

Detecting the force of chameleon fields requires replicating the vacuum of space, Hamilton explained, because when they are near mass, the fields essentially hide. So the physicists built a vacuum chamber, roughly the size of a soccer ball, in which the pressure was one-trillionth that of the atmosphere we normally breathe. The researchers inserted atoms of cesium, a soft metal, into the vacuum chamber to detect forces.

They also added to the vacuum chamber an aluminum sphere roughly the size of a marble, which functioned as a dense object to suppress the chameleon fields and allow the researchers to measure small forces. The atoms were then cooled to within 10 one-millionths of a degree above absolute zero, in order to keep them still enough for the scientists to perform the experiment.

Hamilton and his team collected data by shining a near-infrared laser into the vacuum chamber and measuring how the cesium atoms accelerated due to gravity and, potentially, another force.

“We used a light wave as a ruler to measure the acceleration of atoms,” Hamilton said.

This measurement was performed twice: once when the aluminum sphere was close to the atoms and once when it was farther away. According to scientific theory, chameleon fields would cause the atoms to accelerate differently depending on how far away the sphere was.

The researchers found no difference in the acceleration of the cesium atoms when they changed the location of the aluminum sphere. As a result, the researchers now have a better understanding of how strongly chameleon fields can interact with normal matter, but Hamilton will continue to use cold atoms to investigate theories of dark energy. His next experiment will aim to detect other possible forms of dark energy that cause forces that change with time.

The research was supported by the David and Lucile Packard Foundation, DARPA, the National Science Foundation, NASA and the Austrian Science Fund.