Concrete surrounds us in our cities and stretches across the land in a vast network of highways. It’s so ubiquitous that most of us take it for granted, but many aren’t aware that concrete’s key ingredient, ordinary portland cement, is a major producer of greenhouse gases.

Each year, manufacturers produce around 5 billion tons of portland cement — the gray powder that mixes with water to form the “glue” that holds concrete together. That’s nearly three-quarters of a ton for every person on Earth. For every ton of cement produced, the process creates approximately a ton of carbon dioxide, all of which accounts for roughly 7 percent of the world’s carbon dioxide emissions.

And with demand increasing every year — especially in the developing world, which uses much more portland cement than the U.S. does — scientists are determined to lessen the growing environmental impact of portland cement production.

One of those scientists is Gaurav Sant of the California NanoSystems Institute at UCLA, who recently completed research that could eventually lead to methods of cement production that give off no carbon dioxide, the gas that composes 82 percent of greenhouse gases.

Sant, an associate professor of civil and environmental engineering and UCLA’s Edward K. and Linda L. Rice professor of materials science, found that carbon dioxide released during cement manufacture could be captured and reused. The study is published in the journal Industrial and Engineering Chemistry Research. 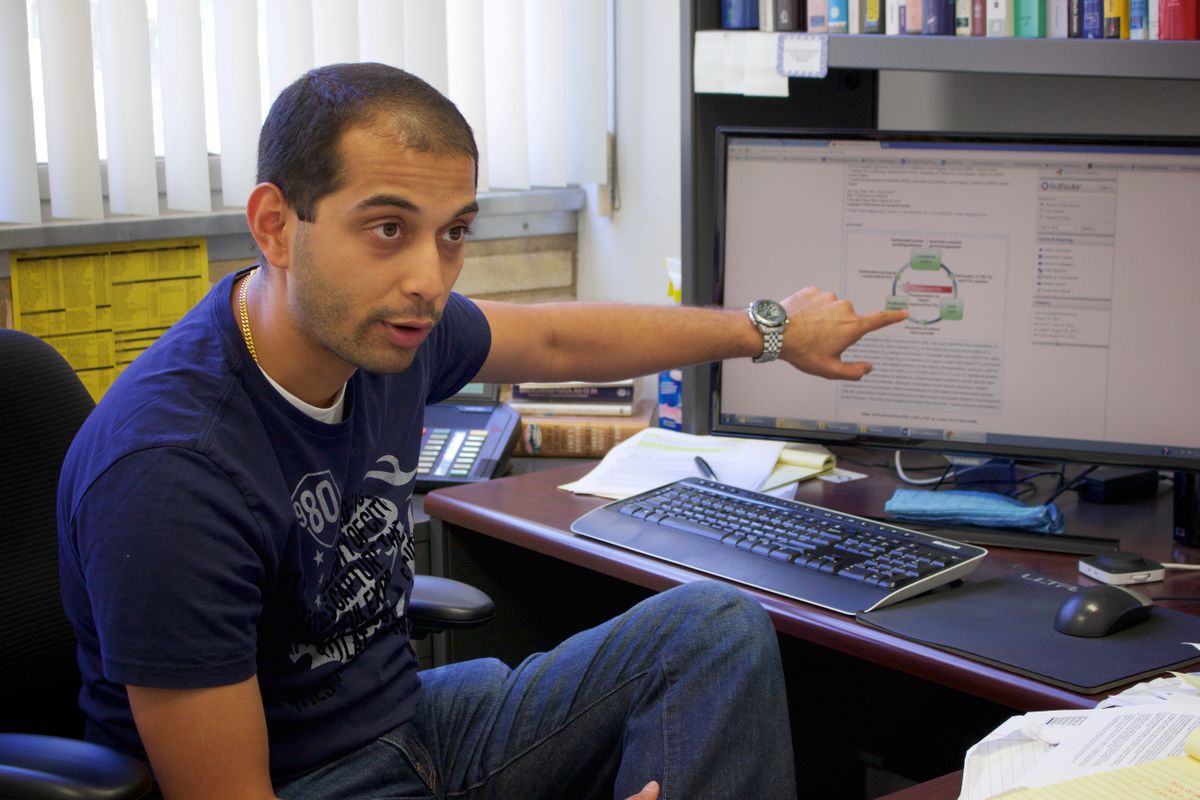 “The reason we have been able to sustain global development has been our ability to produce portland cement at the volumes we have, and we will need to continue to do so,” Sant said. “But the carbon dioxide released into the atmosphere creates significant environmental stress. So it raises the question of whether we can reuse that carbon dioxide to produce a building material.”

During cement manufacturing, there are two steps responsible for carbon emissions. One is calcination, when limestone, the raw material most used to produce cement, is heated to about 750 degrees Celsius. That process separates limestone into a corrosive, unstable solid — calcium oxide, or lime — and carbon dioxide gas. When lime is combined with water, a process called slaking, it forms a more stable compound called calcium hydroxide.

And the major compound in portland cement is tricalcium silicate, which hardens like stone when it is combined with water. Tricalcium silicate is produced by combining lime with siliceous sand and heating the mixture to 1,500 degrees Celsius.

Of the total carbon dioxide emitted in cement manufacturing, 65 percent is released when the limestone is calcined and 35 percent is given off by the fuel burned to heat the tricalcium silicate compound.

But Sant and his team showed that the carbon dioxide given off during calcination can be captured and recombined with calcium hydroxide to recreate limestone — creating a cycle in which no carbon dioxide is released into the air. In addition, about 50 percent less heat is needed throughout the production cycle, since no additional heat is required to ensure the formation of tricalcium silicate.

Sant said the method is analogous to how limestone cementation occurs in nature, where limestone forms the tough exoskeletons of coral, mollusks and seashells, and when microbes form limestone that cements grains of sand together.

Although scientists had examined this idea previously, Sant said it had never been demonstrated before with a view to carbon dioxide-neutral cement production — and that it actually worked faster than he and his colleagues expected. The cycle took just three hours to complete, compared with the more than 28 days needed for portland cement to react with water to near completion and reach its final hardest consistency.

The successful sample was very small, as required by laboratory conditions. But Sant said now that the process has been proven, it could, in time, be scaled up to production levels.

If cement manufacturers continue to operate as they currently do, and if proposed carbon taxes in the U.S. and other nations are eventually enacted, cement production would be much more expensive than it is now. Were that to happen, a new method for producing cement with little or no environmental impact would be of even greater interest, Sant said.

The study contributes to the goals of UCLA’s Sustainable LA Grand Challenge, a university-wide initiative to transition the Los Angeles region to 100 percent renewable energy local water and enhanced ecosystem health by 2050. Sant is also helping to develop the work plan for Sustainable LA.

The research was supported by the National Science Foundation and was conducted in the Laboratory for the Chemistry of Construction Materials in the UCLA Henry Samueli School of Engineering and Applied Science, the Electron Imaging Center for Nanomachines at the California NanoSystems Institute, and the Molecular Instrumentation Center in UCLA’s department of chemistry and biochemistry.