​Scientists at the UCLA Eli and Edythe Broad Center of Regenerative Medicine and Stem Cell Research have discovered that a protein produced by a cancer gene leads to the development of a deadly, late-stage form of prostate cancer called neuroendocrine prostate cancer. The discovery could be a significant step toward a more effective treatment.

The findings, which were published in the journal Cancer Cell, are particularly important because neuroendocrine prostate cancer does not respond to standard treatments, and men who are diagnosed with the disease typically live for less than a year afterward. Up to one-quarter of those who die of prostate cancer have the neuroendocrine subtype.

“Identifying the cellular changes that happen in cancer cells is key to the development of drugs that inhibit those changes and thereby stop the progression of the disease,” said Dr. Owen Witte, founding director of the UCLA Broad Stem Cell Research Center and the study’s lead author. Witte also is a Howard Hughes Medical Institute investigator and a member of the President’s Cancer Panel, which reports to President Barack Obama.

Next, the researchers transplanted the basal cells with the added MYCN genes into mice. Those cells with elevated N-Myc levels grew into neuroendocrine prostate cancer tumors, said Dr. John Lee, the study’s first author and a clinical instructor in the Division of Hematology Oncology at the UCLA David Geffen School of Medicine. 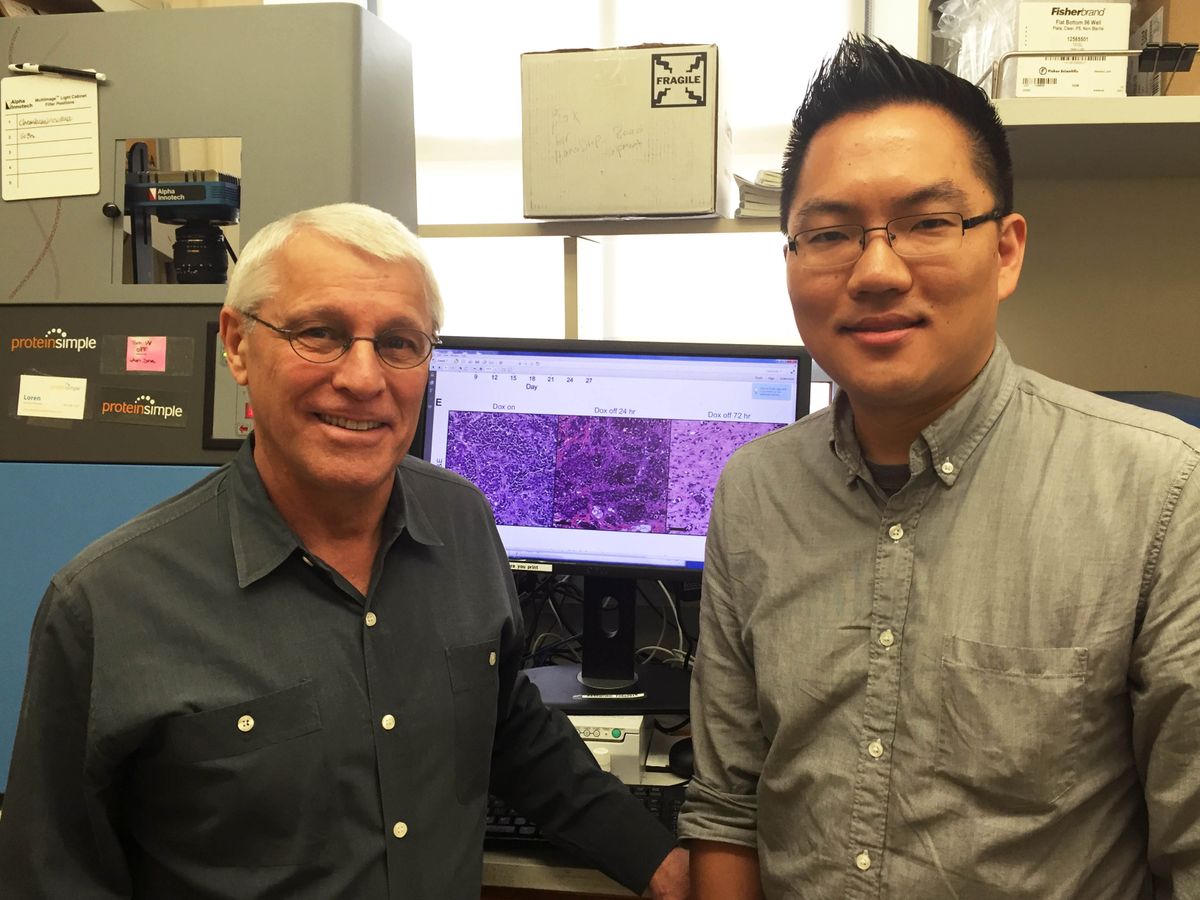 Lee said that knowledge gave the scientists a potential new target for treating neuroendocrine prostate cancer, and they set out to begin work on a new way to attack the disease.

Collaborating with Kevan Shokat and Dr. Clay Gustafson of UC San Francisco, the team found that an experimental drug called CD532 reduced the size of the tumors in the mice by 80 percent.

CD532 had been developed earlier by Shokat and Gustafson for a type of childhood nervous system cancer in which N-Myc also plays a role. The drug had been shown in preclinical studies to have promise for treating that disease, but it had not previously been tested for neuroendocrine prostate cancer.

CD532 works by changing the structure of a protein called Aurora A kinase, which stabilizes N-Myc. In the new research, CD532 effectively destabilized N-Myc and, as a result, suppressed the neuroendocrine tumors’ growth.

Witte’s research has long sought to explain how disease develops on a cellular level. His discovery that a specific type of kinase activity, called tyrosine kinase, can play a role in certain types of leukemia became the foundation for the creation of Gleevec, the first targeted therapy for chronic myelogenous leukemia.

“Kinase activity is known to be implicated in many types of cancers, including chronic myelogenous leukemia, which is no longer fatal for many people due to the success of Gleevec,” said Witte, who also is a member of the UCLA Jonsson Comprehensive Cancer Center and a professor of microbiology, immunology and molecular genetics at the Geffen School. “I believe we can accomplish this same result for people with neuroendocrine prostate cancer.”

Prostate cancer is the second leading cause of cancer death in American men, after lung cancer. It is often treatable, but the chance of survival drops drastically if the tumor becomes resistant to traditional therapies and metastasizes.

Lee said the researchers’ next steps will be to identify other drugs that may be effective for treating neuroendocrine prostate cancer.

CD532 has only been used in preclinical tests and has not been tested in humans or approved by the U.S. Food and Drug Administration as safe and effective for use in humans.

The research also was supported by Prostate Cancer Foundation awards, including the Young Investigator Award, the Challenge Award and an Honorable A. David Mazzone Special Challenge Award, and by a Stand Up To Cancer–Prostate Cancer Foundation Prostate Dream Team Translational Cancer Research Grant, made possible by the generous support of the Movember Foundation. Stand Up to Cancer is a program of the Entertainment Industry Foundation administered by the American Association for Cancer Research.