Dozens of UCLA student-athletes will participate in research by UCLA scientists that is expected to deliver new clues about the biological and genetic risk factors for sports-related concussions.

UCLA researchers in medicine and athletics have outfitted 22 Bruin football players with helmet sensors that measure the speed, intensity and location of hits to the head during all games and practices. The scientists also will track the health of 40 men’s and women’s soccer players. The information they gather could shed light on why concussions strike some athletes more than others, and why certain people recover faster from head injury.

The innovative studies are part of the Concussion Assessment Research and Education Grand Alliance, a landmark $30 million initiative funded by the National Collegiate Athletic Association and the U.S. Department of Defense to collect “big data” on concussions. The three-year project aims to fill critical gaps in knowledge about concussion and translate research findings into new safety guidelines for the more than 450,000 U.S. collegiate student-athletes.

Roughly 75 percent of the money will fund the most comprehensive two-pronged study of concussion in history. (The remaining amount will support an educational campaign aimed at improving safety and changing the culture of concussion reporting and management.)

In the first study, UCLA will work with 20 other universities and military academies to gather neurological and cognitive data from more than 25,000 student-athletes in all NCAA sports.

At UCLA, a partnership between medicine and athletics will enable researchers to conduct clinical studies that monitor athletes’ head injuries from onset through recovery.

“This study capitalizes on UCLA’s strengths in neuroscience, athletics and sports medicine,” said Dr. Christopher Giza, director of the UCLA Steve Tisch BrainSPORT Program and a professor of neurosurgery and pediatrics at UCLA’s David Geffen School of Medicine and Mattel Children’s Hospital. “UCLA has a 25-year history in brain injury research, a high-profile athletic program and one of the top sports medicine and concussion programs in the U.S.”

“Our goal is to make this research the sport-concussion equivalent of the Framingham study,” Giza added, referring to a large-scale initiative launched in 1948 that identified previously unknown risk factors for heart disease. 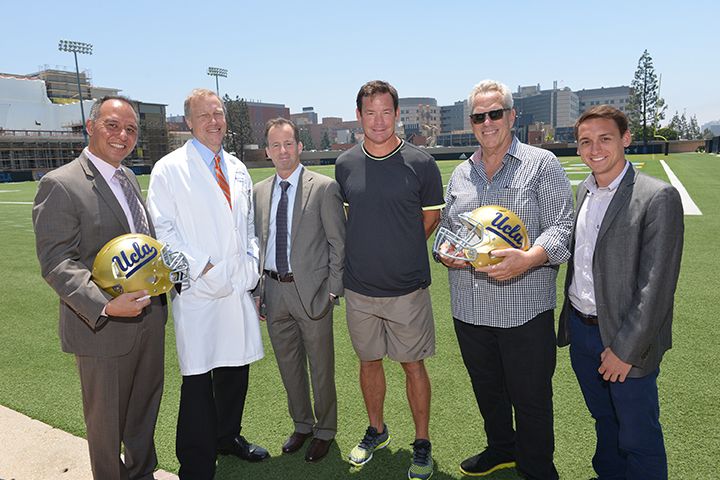 All athletes participating in the first study will receive a preseason medical history and baseline testing for balance, memory, cognitive function and reaction time; the tests will be repeated annually. If a student suffers a concussion, he or she will repeat the tests six times at designated intervals over the following six months. To date, 5,000 students have enrolled in the study and completed baseline testing.

According to Giza, concussed athletes rarely lose consciousness or show other objective signs of brain injury. Athletic trainers and team physicians rely in part on self-reports from players, who may downplay their symptoms in order to get back in the game.

“Our goal is to develop scientific, evidence-based tools that will enable doctors to more accurately gauge when it is safe for an athlete to return to play,” Giza said.

In the second study, UCLA and three other universities will blend sports science and medical technology to gather biological data from some 400 men and women competing in football, soccer, ice hockey and lacrosse — the collegiate sports with the highest concussion rates.

Investigators will examine athletes’ blood samples for biomarkers that may predispose some to brain injury or help others recover faster. So far, 200 athletes have enrolled nationwide.

Football players in the study will wear helmets outfitted with sensors that measure the impact of collisions they sustain on the field. The sophisticated gadgets wirelessly transmit data to a laptop for analysis, and pagers connected to the helmets alert medical staff to what could be a significant hit.

“The helmet sensors allow us to track the frequency, magnitude and direction of hits that our football players sustain to the head,” said Dr. John DiFiori, chief of sports medicine at the David Geffen School of Medicine at UCLA and UCLA’s head physician for intercollegiate athletics.

According to DiFiori, the findings will be invaluable in identifying athletes who are at risk for a brain injury before one occurs.

“If the data shows that an athlete’s impacts occur mostly on top of his head rather than in front or on the sides, we can take the player aside and say, ‘Here’s what we're seeing on our helmet impact data. We need to work on your technique,’” said DiFiori, who is also a UCLA professor of family medicine and orthopaedics.

The tests in the second study also will be repeated each year. And in an effort to detect biological changes linked to brain injury and recovery, any athlete in the study who suffers a concussion will undergo brain scans and repeat follow-up tests five times over a six-month period. Their names won’t be revealed, and they may opt out of the study at any time.

According to the U.S. Centers for Disease Control, as many as 3.8 million sports concussions occur in the U.S. each year. Up to half of them are unreported because the symptoms aren’t recognized. Sports are second only to motor vehicle crashes as the leading cause of traumatic brain injury among people aged 15 to 24.

Editors: B-roll of a clinical concussion exam and a demonstration of the football helmet sensors are available upon request. Please contact the UCLA media representative.