When the Woolsey Fire roared through the Santa Monica Mountains in fall 2018, it torched half of the available habitat for the area’s mountain lions — a population already hemmed in by freeways and an ocean.

Most survived the blaze, but in a study published today in Current Biology, scientists from UCLA and the National Park Service found that the animals, no longer able to utilize burned areas, engaged in risky behaviors that increased the likelihood of dangerous encounters with human-built infrastructure and rival mountain lions.

Conflicts with other cougars, particularly males, can be deadly, said lead study author Rachel Blakey, a researcher with UCLA’s La Kretz Center for California Conservation Biology. So can crossing busy roads and freeways, something the researchers found occurred with greater frequency in the 15 months after the fire, jumping from about three crossings a month to five.

“The mountain lions we live alongside in L.A. are already taking their chances with roads and other mountain lions,” Blakey said. “The Woolsey Fire, by further limiting the space they have, really intensified those risks.”

The mountain lion known as P-61 is a case in point. As all subadult males do, P-61 left the area where he was raised to establish his own home range. But with so much land burned, he ventured east from the Santa Monica Mountains across the 405 freeway — the first recorded successful crossing of the nation’s busiest roadway by a cougar. He quickly found himself in a physical confrontation with an adult male in the hills east of the freeway, and attempting to retreat across the 405, he was struck by a vehicle and killed.

Santa Monica Mountains National Recreation Area
The young mountain lion P-61 dashes across a road beneath the 405 while fleeing a rival in summer 2019. P-61 would die less than a half-hour later after being hit on the freeway.

Another male, P-64 — known as “Culvert Cat” for his habit of crossing under the 101 freeway through a drainage tunnel — was in the Simi Hills of Ventura County during the fire and fell on hard times immediately after. With nearly two-thirds of cougars’ habitat in those hills burned, P-64 moved south, where he encountered urban development and, likely, firefighting and evacuation activity. That may have been what drove him back north, where the ground was still smoldering. He died a few weeks later.

“We could see his paws were burnt, and he died of starvation,” said Seth Riley, co-author of the study and wildlife branch chief for Santa Monica Mountains National Recreation Area, where the study was conducted. Riley’s team recovered Culvert Cat’s body. 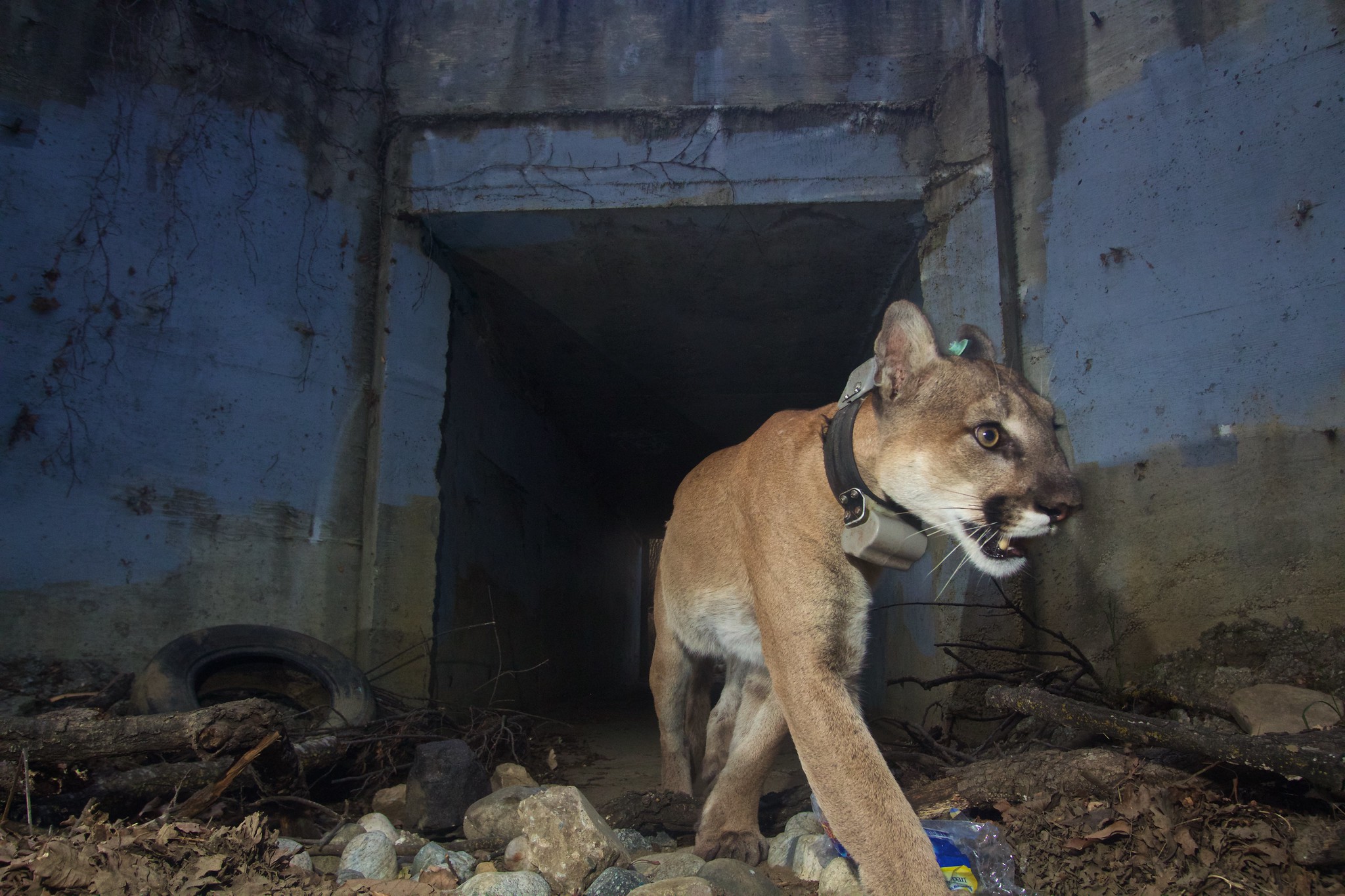 The study’s findings, based on location and activity data from National Park Service tracking collars on about a dozen cougars, along with data on the fire and local terrain, illustrate just how disruptive wildfires can be for local mountain lion populations.

Because they are ambush predators who rely on cover and the element of surprise to catch prey, the widespread loss of dense brush and chapparal means far fewer hiding spots from which to pounce, and the researchers found that the mountain lions almost completely avoided the large burned swathes of their habitat.

A change in hunting habits may also partially explain why the largely nocturnal mountain lions were found to be busier during the daytime after the fire, remaining active for 16% of daylight hours, up from 10% before the fire. This may be due to their need to hunt animals other than mule deer, their primary prey, Blakey said, as well as to avoid other males. The increase in daytime activity also makes it more likely that they’ll encounter humans.

And while the park service received an influx of inquiries as to whether the cats were encroaching more on populated areas after the fire, the study found this wasn’t the case.

“With all our research, we’ve found this very strong tendency to avoid urban areas. That didn’t change post-fire,” said co-author Jeff Sikich, an NPS biologist who leads a team that finds and collars mountain lions, tracks their diet, measures survival rates and determines causes of death.

Sikich chalks the suspicion about growing mountain lion incursions up to the spread of home security and surveillance cameras, which may give the people the impression of increased activity. After all, a gated community’s security camera captured the encounter between P-61 and his rival. 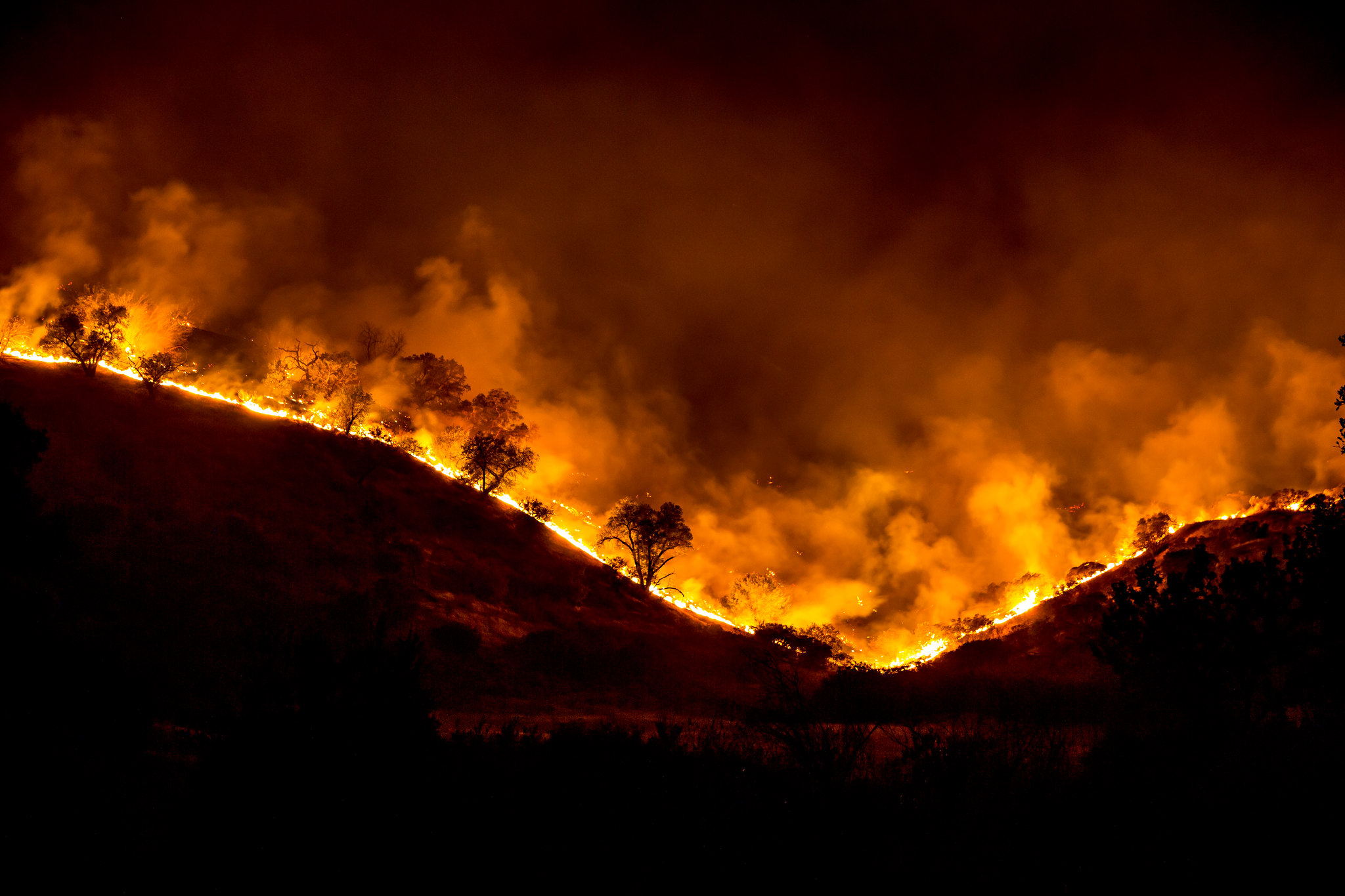 Forest Service, USDA
The Woolsey Fire burned 100,000 acres in Los Angeles and Ventura counties and wiped out large portions of mountain lions’ habitat. The destruction led to significant changes in the animals’ movements and activities.

The NPS has been studying and tracking Los Angeles’ unique population of urban mountain lions for 20 years. Partnering with the UCLA La Kretz Center and its postdoctoral researchers, including Blakey, has helped scientists deepen their understanding of these animals and improve conservation efforts.

These efforts include boosting the genetic diversity of the region’s small mountain lion populations, which have been isolated from each other for years by freeways and have recently begun to show reproductive effects of inbreeding. Connecting them to new habitats and mates is crucial to keeping extinction at bay, Riley said. The new Wallis Annenberg Wildlife Crossing over the 101 freeway, currently in construction, is a leap in the right direction, but more is needed, he said

Solving the problem of wildfires is a more difficult challenge. Human development has vastly increased ignition sources and led to more fires over shorter periods of time, which is bad news for the native chapparal and for mountain lions. Vegetation might fail to regrow densely enough to serve mountain lions’ hunting needs and could be replaced be invasive grasses that are even more flammable.

“We need to do whatever we can to increase habitat connectivity, reduce the effect of massive fires and make sure we still have these magnificent animals in the park and in the region, for future generations,” Riley said.

Understanding how mountain lions behave in a place like Los Angeles is part of developing a broader perspective on how people and wildlife share space in the world, said co-author and UCLA professor Daniel Blumstein.

“Studies like this,” he said, “where we ask how animals use and perceive their human altered world, are essential to better understand and manage the threats to our urban biodiversity.” 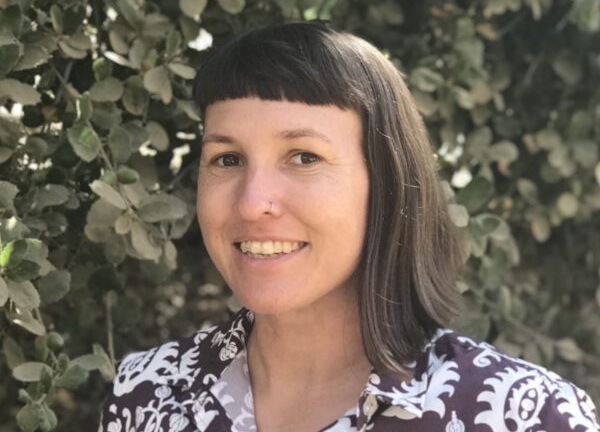 To connect and conserve

Rachel Blakey, lead author of this study, is part of the UCLA Institute of the Environment and Sustainability’s La Kretz postdoctoral fellowship program, which focuses on actionable research in partnership with California conservation and management agencies. The six program researchers are working on a range of issues, from protecting endangered species to understanding how plants and animals live at the urban-wildlife interface.