Biking amid the traffic of Los Angeles and hills of Westwood is no easy feat, but it’s a trick that more than 3,000 Bruins tackle to commute to campus – and UCLA wants to make it easier.

With a growing network of bike lanes on and off campus, repair stations, incentive programs and other creative ways of supporting and encouraging biking at UCLA, it’s no surprise that UCLA was one of the original 20 campuses in the country to become a Bicycle Friendly University when the award was created in 2011. The League of American Bicyclists today bumped UCLA even higher, naming it a “silver” Bicycle Friendly University, up from bronze. Now 127 universities nationwide are on the list, and UCLA’s silver level places it in the top third.

That honor comes thanks to changes made all over campus by UCLA Transportation, the UCLA Bike Shop and UCLA’s Healthy Campus Initiative – changes that are making a dramatic difference for UCLA’s bike commuters and winning converts to the cycling lifestyle. Check out some of those changes below.

1. New bike lanes on and into campus 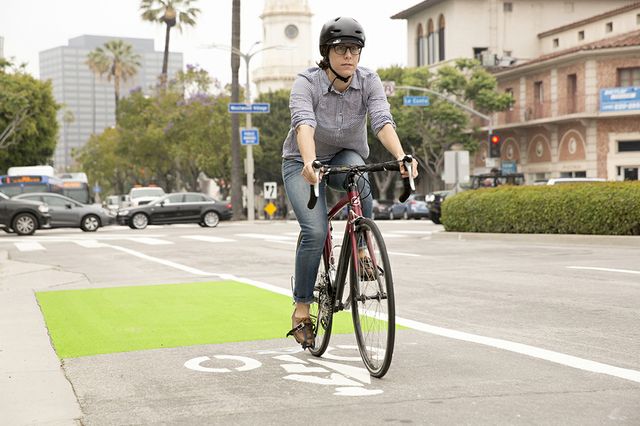 The past few years have been banner years for bike lines on campus streets. One of the newest lanes is on Charles E. Young Drive North near Parking Lot 7. Bright green paint also demarcates bike lanes by Royce Hall and up Westwood Plaza.

2. Advocating for safer bikeways on nearby streets 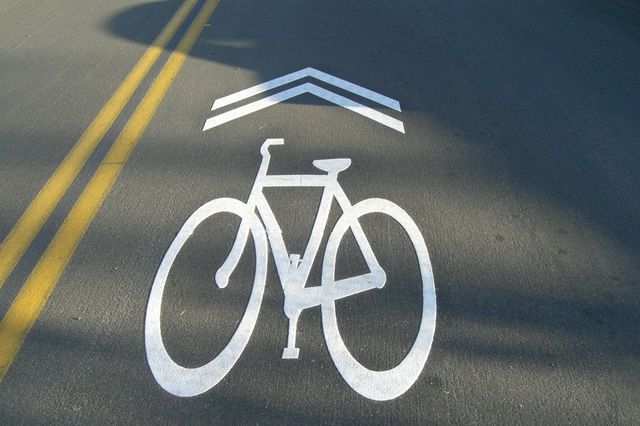 UCLA Transportation officials have testified at the Los Angeles City Council and committee hearings about the new Mobility 2035 plan to express support for more bike lanes, especially a bike lane proposed on Westwood Boulevard between Wellworth Avenue and Le Conte Avenue that would be a key connector to campus. 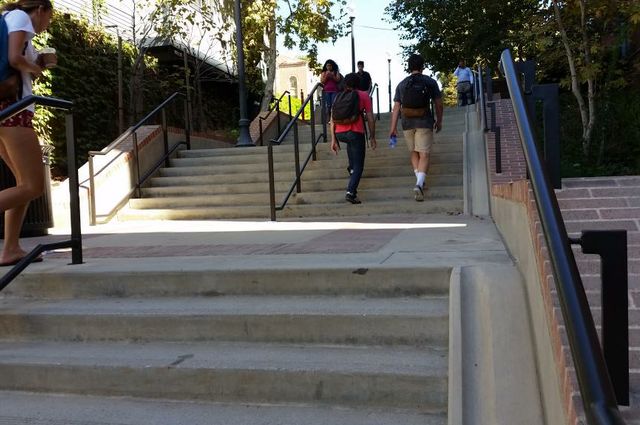 One of the latest ways UCLA made it easier to bike to work or class are these nifty grooves in the stairways behind Ackerman Student Union. Instead of hefting or bouncing a heavy bike on the stairs, riders can wheel it smoothly alongside them. 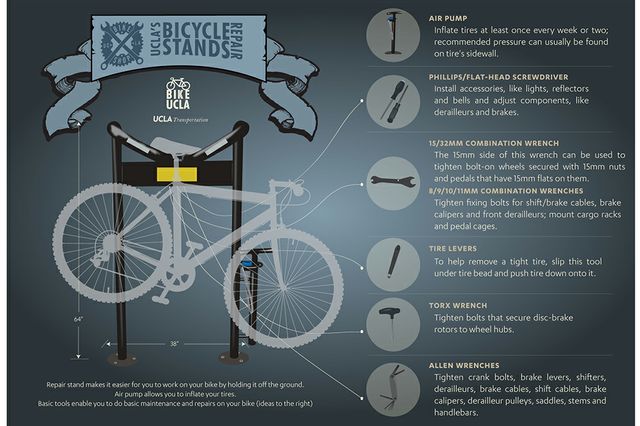 These six bike repair stands scattered across campus each include an air pump, screw drivers, wrenches and other essential bike tools. And that “repair stand” part is literal – the station doubles as a place to hang the tools and a place to suspend your bike while you’re working on it. 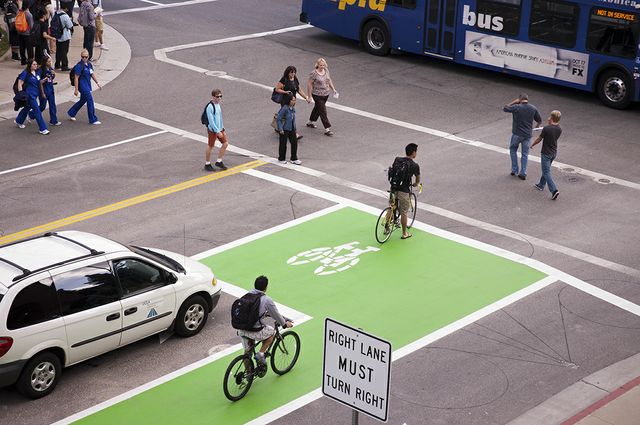 The campus added a bright green “bike box,” an extension of the nearby bike lane, at the Westwood Blvd. and Strathmore intersection in 2012 to create a car-free zone where bicyclists can safely wait for the light to change, avoiding right-turning vehicles. 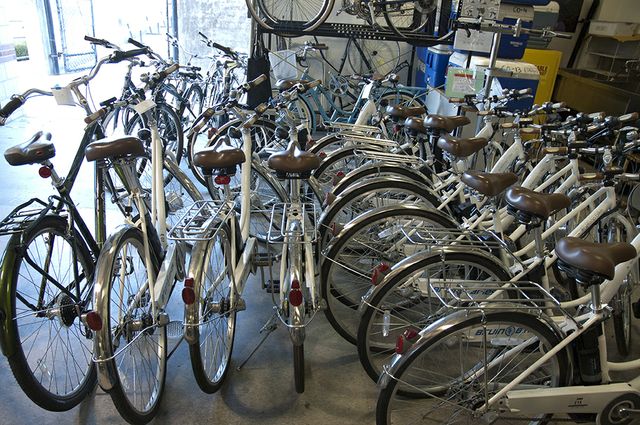 The Bike Library offers students inexpensive bike rentals for a full academic quarter, and the Employee Commuter Bike Loaner program gives employees a free two-week rental – handy if your own bike is in the shop or you just want to see if cycling to work is the lifestyle for you. 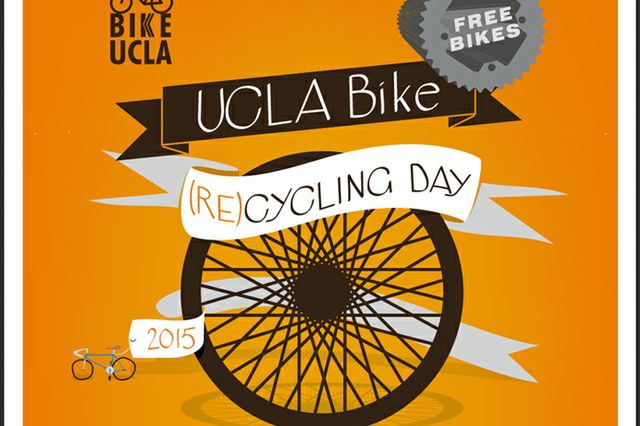 The campus’s annual Bike ReCycling day is this weekend, and Bruins all over campus eagerly sign up for a lottery to get the first crack at the hand-me-down and abandoned bicycles collected on campus over the year. 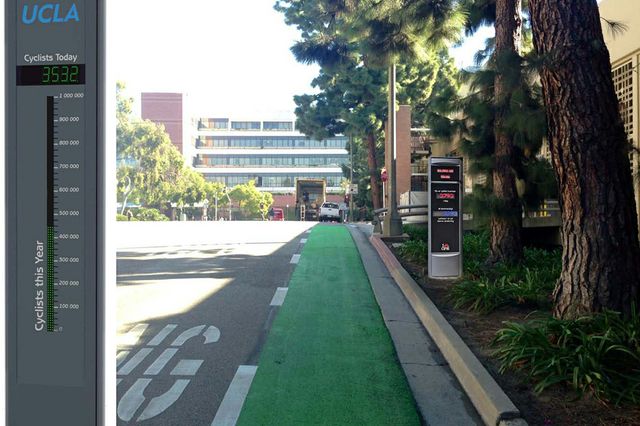 The campus installed the first bike counter in the city in 2013 which helps track bike ridership and serves as a gateway sign, letting cyclists know they're part of a larger community. 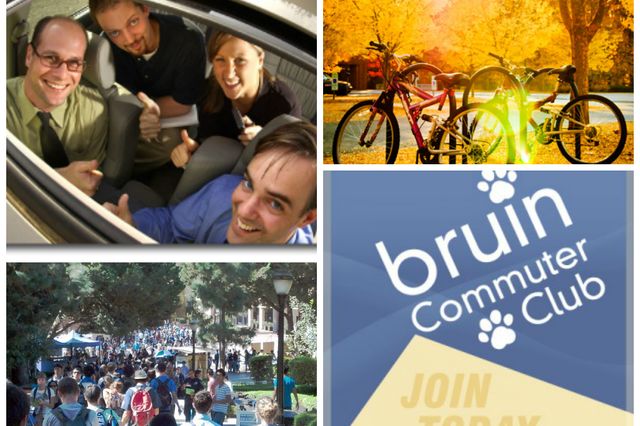 Bicyclists are eligible for the Bruin Commuter Club, which includes discounted parking on days when driving is unavoidable, and emergency rides home. Discounted gym access with the Commuter Passport gives serious bike riders access to showers and changing rooms without the cost of a full gym membership. Cyclists can also take advantage of UCLA’s subsidized bus passes – especially handy for bikers with long or hilly routes.

10. Supporting programs like the Eco-chella music festival (with bike-powered smoothies) 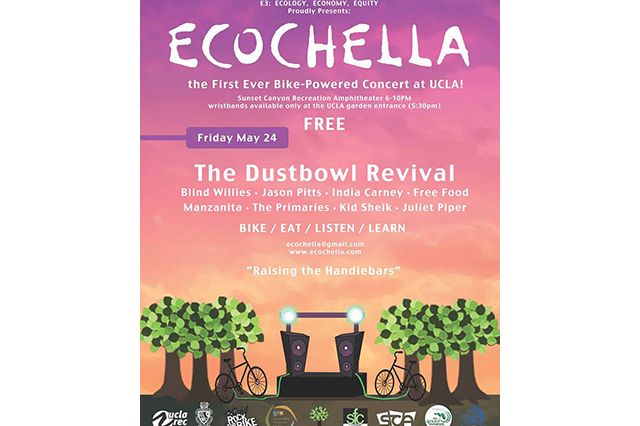 Talk about pedal power. The semi-annual Eco-chella music festival on campus relies on attendees to ride bikes that power the speakers for the bands. 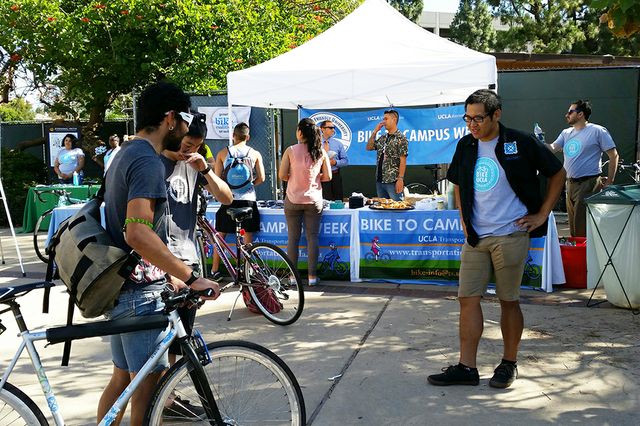 UCLA’s yearly Bike Week encourages commuters to give biking a try, and helps spread the word to current and potential bikers alike about the different resources on campus for cyclists – not to mention the health benefits and other advantages to bicycling.

12. The UCLA Bike Shop, offering all kinds of services and free classes 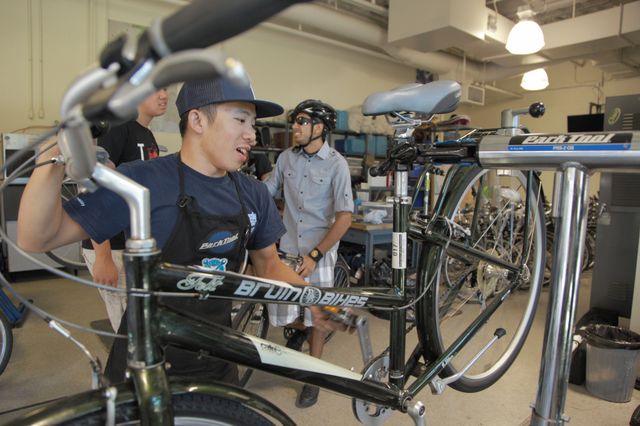 The UCLA Bike Shop offers free use of its tools for hands-on cyclists prepared to make repairs, and for a fee, will fix a bike for you or teach you how to do it. UCLA Recreation and UCLA Transportation support the shop together to encourage carbon-free transportation that also provides a workout. 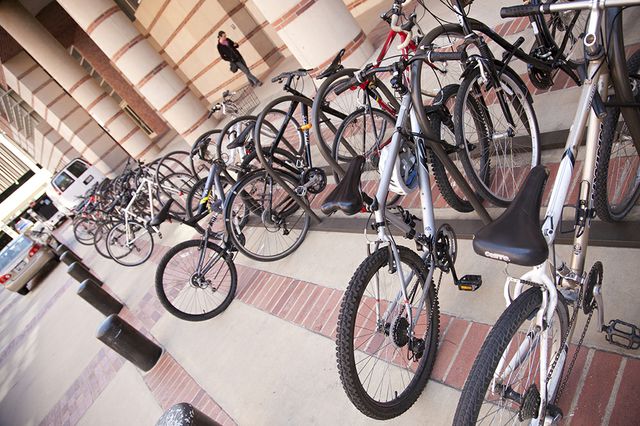 Dozens of bike racks all over campus provide more than 3,000 free bicycle parking spaces. Bike lockers are also available for a rental fee For added security, electronic bike lockers are available on-demand for cyclists around campus.