Can Los Angeles meet the daunting demand for 100,000 additional housing units by 2021? That’s the ambitious goal that Los Angeles Mayor Eric Garcetti set in a plan he presented in April to alleviate the city’s worst housing crisis since World War II.

Dana Cuff, professor in the School of the Arts and Architecture and director of cityLAB, the architecture and urban design think tank at UCLA, thinks it can be done — without buying up a single square foot of vacant land or bulldozing existing buildings.

The answer is as close as your backyard.

Cuff and a team of students and faculty from both the architectural and urban design department and UCLA College’s environmental humanities program, with help from staff skilled in construction, are testing out their concept for an affordable, lightweight, customizable, environmentally sensitive accessory dwelling unit — a distant cousin of the granny flat or the mother-in-law unit.

They’re working on building a basic life-size scale model in the Broad Art Center’s “backyard,” on the second-story north patio. The BI(h)OME, as it’s called, will be on display June 10-17. Working with UCLA architecture students, Kevin Daly Architects, which led the design of the project, worked in collaboration with cityLAB. Colleagues Jon Christensen, adjunct assistant professor in the Institute of the Environment and Sustainability, and English professor Ursula Heise contributed their expertise on environmental issues. 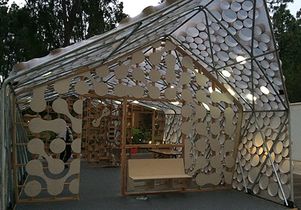 Courtesy of cityLAB
The BI(h)OME will be on display until June 17.

The project, which students and Daly began designing in January, is UCLA’s answer to both a housing crisis and an environmental crisis, Cuff said. And it’s aligned with the goals set in UCLA’s Sustainable L.A. Grand Challenge project, a university-wide research initiative to transition the Los Angeles region to 100 percent renewable energy, 100 percent local water and enhanced ecosystem health by 2050. The project unites approximately 150 faculty from 70 departments.

“Today, we don’t have enough affordable housing, and, given the hotter, drier climate, we’re losing environment to support all kinds of species. So there’s an environmental crisis that corresponds to a housing crisis,” Cuff said. “These imperatives are something we can begin to solve — and where better to do that than at UCLA where we have an incredible trove of expertise, creativity and unbelievable students. What’s completely unique about this house is that it will add to the environment — the biome —rather than detract from it.”

BI(h)OME is designed for multi-species cohabitation. Although it is only slightly smaller than a two-car garage at 350 square feet — enough room to house one or two people — the house also can be built with interesting nooks and crannies, living quarters for lizards, small field mice, an edible garden, bees, birds and bats, Cuff said, all good roommates for humans to have.

“Bats are an absolutely essential species for keeping the insect population in check,” she said. “But if you really don’t like bats, you don’t have to put in a bat habitat.” The bats would live in shingles under which they can cling, Cuff said.

The watertight house, built of plastic sheeting shrink-wrapped over a framework of electrical conduit pipes, is so lightweight that the structure can sit on jacks around which a rock foundation, known as a gabion, would wrap. All of the building materials can be hand-carried on site and assembled by two people. The floor and end walls at the front and back of the house are built of wood, with openings for light and ventilation. On the outside of the house, large cardboard tubes, equipped with LED lights, line the plastic-sheet walls and roof to give the structure an ultra-modern look. Another layer of plastic sheeting will then go over the tubes to protect them from rain.

The final design shows a small wooden deck in front with a bench that slides in and out of the structure. And while the basic model being built at the Broad center won’t have all the amenities, the house is intended to have a compact kitchen, with a system for collecting gray water for the plants; a compostable toilet; and, instead of plastic sheeting used in the prototype, fabric in which solar cells are embedded to run the house on solar power.

“It’s reversible — you don’t have to destroy your backyard to build it — recyclable and environmentally efficient,” Cuff said. The project also was reviewed by a structural engineer, who volunteered his services. “Environmentally, it’s between 10 and 100 times more efficient to construct than a conventional house, mainly because it’s so light.”

The unit would last 10 to 15 years. “And then you can recycle every piece of it. The whole thing goes away as if it were never there. It would be like getting an Airstream trailer and parking it in your backyard,” Cuff said.

Cuff maintains that if 20 percent of the city’s 500,000 single-family lots with an under-utilized garage or backyard could support an accessory dwelling unit where one or two people could live, the mayor’s goal could be met.

“Think about it — to be able to build 100,000 more housing units without acquiring a single bit of land,” Cuff said. “That’s an unbelievable resource. It’s like saying, ‘There’s gold in your backyard, but nobody’s picking it up.’”

A reception at the site will be held today (June 10) from 5 p.m. to 7 p.m. The event is being hosted by faculty members Hitoshi Abe, Mark Gold, Peter Kareiva, and Tina Quinn and will feature a conversation with the principals involved in the project beginning at 6 p.m. Moderated by Frances Anderton of KCRW’s “DnA: Design with Architecture,” the discussion will include faculty members Cuff, Christensen and Heise, and also feature architect Kevin Daly.