In an evening that combined choral classics with heartfelt tributes by students and colleagues, professor Donald Neuen led his final concert last Friday as longtime director of choral conducting and choral studies at UCLA’s Herb Alpert School of Music. Standing before a packed Royce Hall audience, Neuen, now officially retired at the age of 80, raised his baton to lead hundreds of performers from three groups that have benefited from his virtuosity — the UCLA Chorale, the L.A.-based Angeles Chorale and the UCLA Philharmonia.

For Neuen, “The Faith of Beethoven: A Musical Journey of Hope” concert marked 60 years as a conductor and 50 years as a university teacher whose greatest wish was to impart his love for choral music to students. In return, students expressed their gratitude by posting online comments about their beloved professor. “The man is amazing. One of the best teachers I’ve had in my life. He really cares about the students and how they learn and perform music.” Wrote another, "There are times he might lose his temper with the choir, but that is because we are not doing our best. At the end of every class he always reminds us how intelligent and wonderful we are."

The audience at Royce gave him their own tribute at the concert’s end with a standing ovation and cheers that saw Neuen returning to the stage four times before his final bow.

Three weeks ago, Neuen bared his own feelings to students crowded into DeNeve Auditorium to hear him deliver “My Last Lecture.” Each year, students vote for a professor who has had a profound impact on them. The award, presented by the Alumni Scholars Club, comes with an invitation to respond publicly to one question: “What would you tell your audience if you had but one lecture to give?” 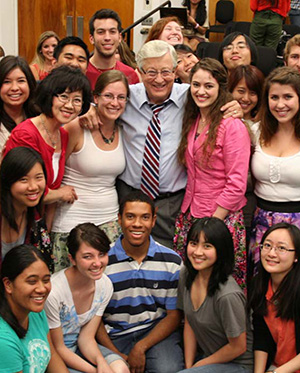 Neuen with colleagues and students.

“Nothing … not even a concert at Carnegie Hall … comes close to being honored by students. Nothing is more fulfilling to a teacher than the admiration and love of students,” Neuen began before encouraging students to seek perfection in their work and to always have a mentor to emulate.

Neuen shared some of these same ideas during his farewell concert at Royce Hall, where he was presented with a plaque and a custom-made book capturing the highlights of a life devoted to music. Leading the presentation was Rebecca Lord, UCLA associate director of choral activities, who earned her master’s and doctoral degrees in conducting at UCLA. “Donald Neuen is my mentor,” said Lord tearfully.

Raised in what Neuen described as “the small, enormously musical, Swiss-Mennonite community of Berne, Indiana,” he was mentored by choral giants Robert Shaw and Roger Wagner. Author of a highly regarded textbook entitled “Choral Concepts,” Neuen has been referred to as “the great choral conductor of his generation” by musicologist Julius Herford.

Neuen's first teaching job was at a small high school in Indiana where he took on a choir of 16 students whose first Christmas concert was 11 minutes long and took place during halftime at a school basketball game; the following year, 168 of the school's total 187 students tried out for the choir. He went on to serve on the faculties of the universities of Wisconsin, Tennessee, Ball State and Georgia State as well as the Eastman School of Music before joining UCLA two decades ago. Under his direction, the UCLA Chorale and the Angeles Chorale have won lavish accolades. The University of New Mexico’s John Clark praised the UCLA Chorale as “the finest choir I’ve ever heard – and that’s in comparison with the Robert Shaw Chorale, the L.A. Master Chorale, and other professional and university choruses from around the world.”

He has also conducted top professional, church and community choirs and orchestras at such venues as Chicago’s Orchestra Hall, the Kennedy Center in Washington, D.C, and New York's Carnegie Hall and Lincoln Center. Since 1999 he has conducted, and he will continue to conduct, the “Hour of Power” choir with Shepherd’s Grove — formerly the Crystal Cathedral — which is televised internationally every Sunday to an audience of more than 31 million.

“I can’t imagine anything else in life that goes straight to your soul than the sound of people singing,” Neuen told students during his lecture at DeNeve Auditorium.

This story was adapted from the original at the UCLA Department of Music.