Growing up in the Sri Lankan capital city of Colombo produced fond memories for Akana Jayewardene. Most mornings Jayewardene rode in the back seat of the family’s Fiat Punto, while her mother drove her to school and she and her little sisters hoped the car wouldn’t stall that morning, as it often did.

But the country’s long-running civil war was always in the background. One day, when Jayewardene was just 13 years old, a bomb exploded along their normal route — she and her sisters had fortuitously skipped school that day. Every morning afterward, Jayewardene would look out the car window and see a wall embedded with shrapnel. That experience and the ever-present threat of violence made her think about how places can be made to feel safe or unsafe and, in a sense, shaped her future.

Years later, as an undergraduate student in San Francisco, Jayewardene’s curiosity about concepts of place took a different form as she thought about how immigrant communities create a sense of home. 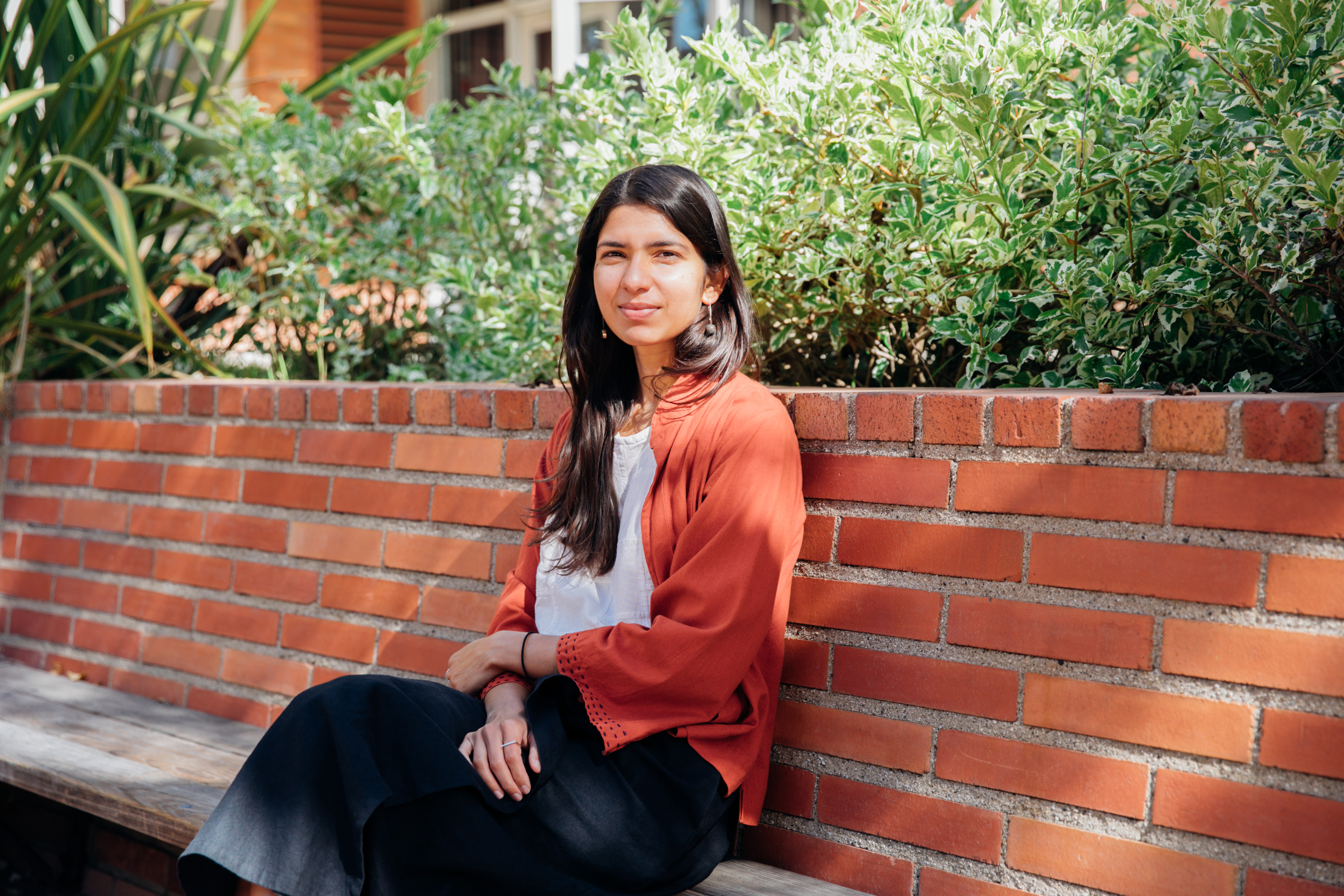 “Is it the architecture around you? Is it the people around you? Is it memories that you create for yourself?” she wondered. In Sri Lanka, that sense of community came from Saturday morning drives to the beach to go surfing and chatting with a friendly vendor with a wooden shack on the side of the road where she often bought coconuts.

While living in Tokyo during a three-month internship in the office of prominent Japanese architect Shigeru Ban, Jayewardene spent long train rides watching the landscape race past the windows in awe of the city’s immensity.

“I’ve always really been fascinated by public space and what it’s like to live in a city, and what kinds of spaces are comfortable and what kinds are not, and how notions of comfort differ from person to person,” Jayewardene said.

Such thoughts ultimately led her to UCLA to study architecture and urban design, where since arriving she has taken advantage of the opportunities available here. Jayewardene has worked as a research fellow at cityLAB and as an editor for the student publication POOL. Jayewardene is set to graduate this quarter with a master of architecture degree, and will serve as the graduate student speaker at the UCLA School of the Arts and Architecture’s commencement ceremony on June 11.

UCLA Commencement 2022: Read student profiles and learn who will be delivering the inspiring addresses

She said she was surprised to be selected by the school to be a student speaker but said that writing her commencement speech has helped her to think about her views on the role architecture plays in our lives, and her part within that role.

Jayewardene left Colombo when she was 18 to get a bachelor’s degree in architecture and community design at the University of San Francisco. Her thesis project focused on immigrant enclaves, such as Chinatown, the Mission District and Little Saigon. She interviewed restaurant owners in Little Saigon as her entry point into the community. She approached the project as an international student trying to carve out a space for herself in a foreign city.

After being denied an immigration visa in the United States, Jayewardene returned to Sri Lanka. She was disappointed to leave San Francisco after making a home there.

“But in retrospect, I think it was really important for me to live in Sri Lanka as an adult,” she said. “That was really formative in a lot of ways, to have the perspective of going back and forth.”

As a woman in Sri Lanka, where catcalling on the street is far more common, she was particularly attuned to how gender affects a sense of space and safety in public spaces.

“I often felt uncomfortable walking around at night by myself in Sri Lanka,” she said. “In the U.S., for the most part, you can walk down the street and nobody will pay attention to you.”

Sri Lanka is an island located off India’s southern tip. For most of her life, the north and east sides of the island were closed to visitors because the civil war made it too dangerous. Even after the fighting ended in 2009, land mines made those areas inaccessible. When Jayewardene moved back in 2017, the north and east had reopened and she could finally travel there.

“The culture and architecture were really vibrant, but the scars of war were literally on the walls of buildings,” she said. 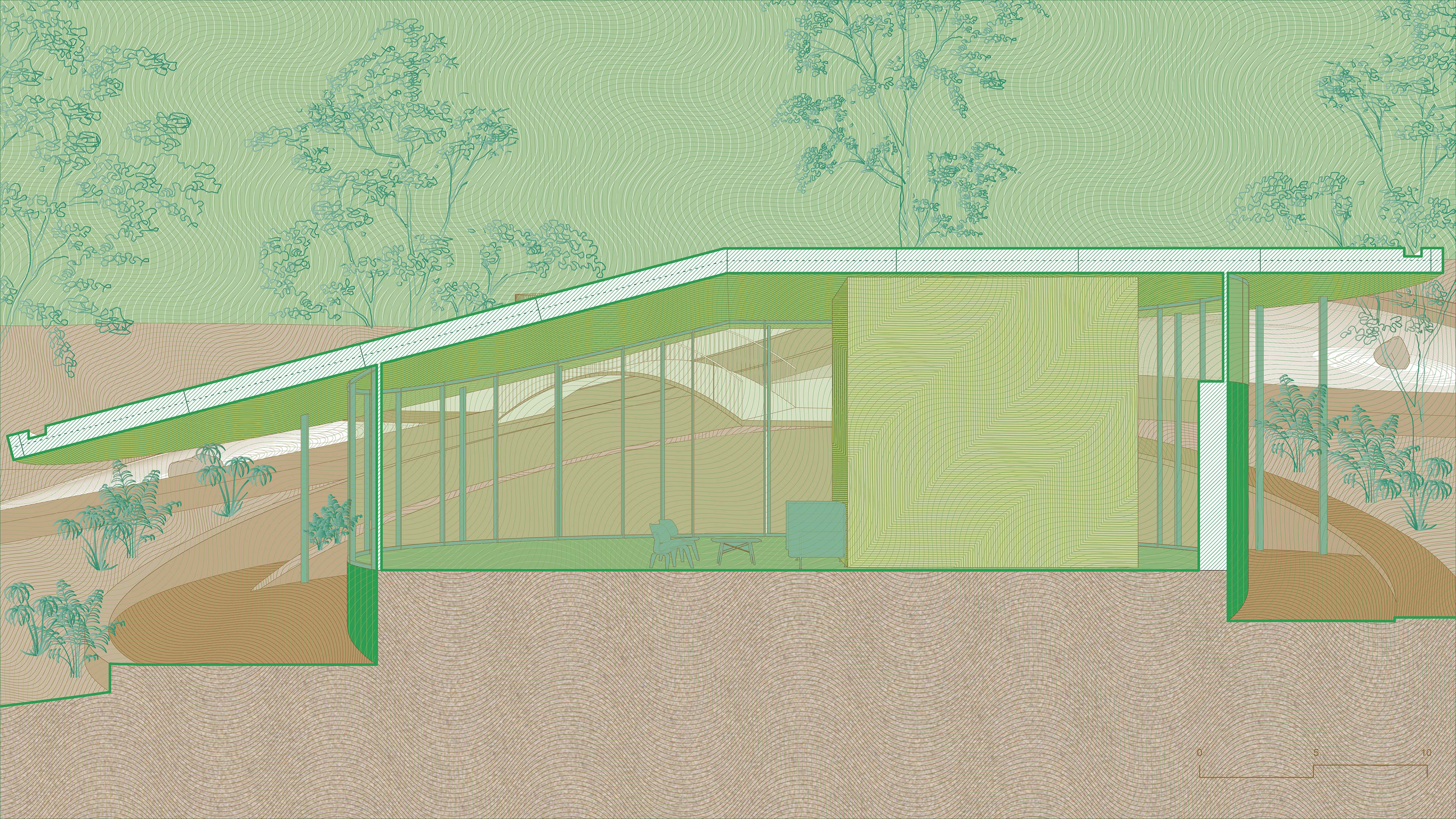 Courtesy of Akana Jayewardene
“Bruin en Groen Tuinen (Brown and Green Gardens)” explores the potential of dry landscapes and green buildings. The reading room, imaged here, is carved into the ground and shaded with an overhanging roof to create an intimate reading space as well as a thermally comfortable interior with views to the dry gardens outside.

The questions that dogged her about urban design — What constitutes safety? Who is public space built for? How do people of different genders experience the same built environment? — and the experience of immigrants in big cities led her to UCLA’s architecture program, along with limited career and economic opportunities in Sri Lanka. Jayewardene said she was particularly intrigued by the cutting-edge design research taking place at cityLAB, a think tank within the architecture and urban design department led by Professor Dana Cuff, and the global-minded approach of a studio being led by Professor Neil Denari.

“I was able to apply research from UCLA to things that I was concerned about living in Colombo. And that was so cool that it was relevant. It was applicable, even to my little hometown, and that was a big draw,” she said. “The problems being studied at UCLA didn’t seem like they would just pertain to UCLA or Los Angeles. They were global issues.”

“If there is one term that could possibly describe Akana it would, for me, be global citizen, a person with a broad understanding of life and culture beyond one’s home and who is, within foreign contexts, an active participant in the affairs of community,” Denari said. “Akana’s spirit is guided by the quest for knowledge, not for private or hermetic purposes, but for the idea of betterment at every turn. And embedded within this form of citizenship is a great eye for design and a mind tuned to the nuances of conceptual firmament. Akana uniquely and emphatically embodies the aspirations of UCLA’s mission to push the boundaries of knowledge for the public good.”

Finding a place at UCLA

In the spring of 2020, associate professor Jason Payne challenged his class to mash up two very different building typologies: a parking garage and a gym. Jayewardene designed a gym of varying stairs and sloped surfaces, with different exercise activities assigned to different inclines. The idea she took from that class, she said, is that “even just a room that you’re in, or the dimension of a corridor, or the slope of a surface you’re standing on, has a huge impact on your body.” 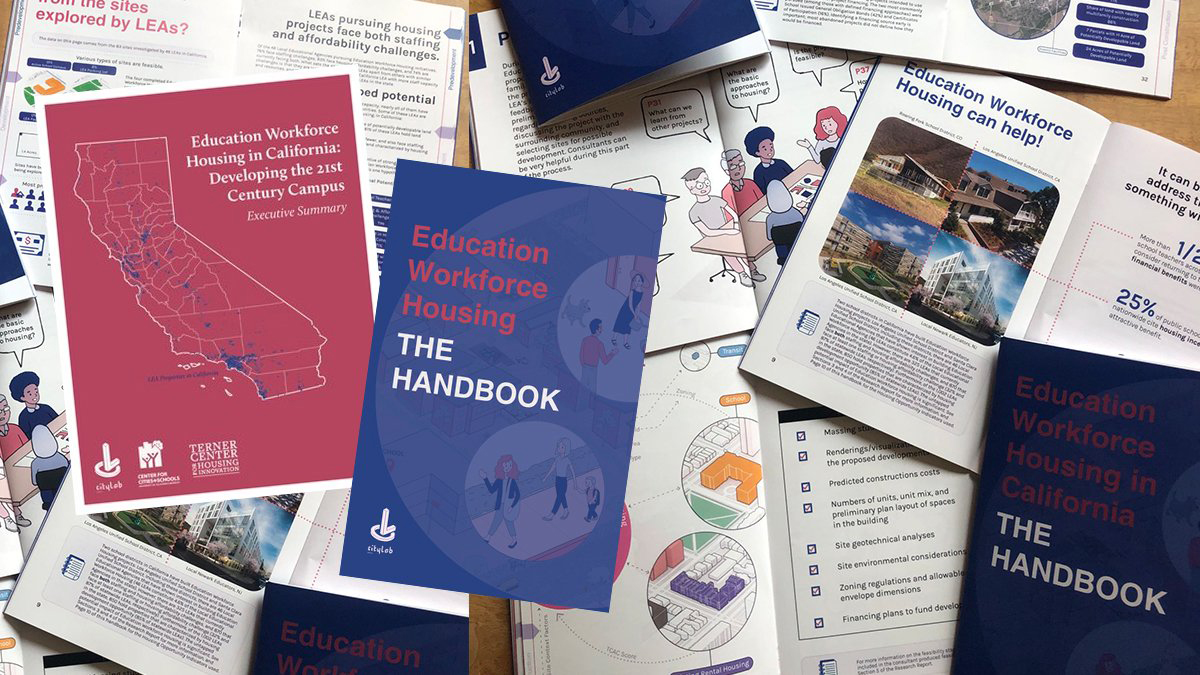 Courtesy of cityLAB
Jayewardene was on the research team for cityLAB’s “Education Workforce Housing in California: Developing the 21st Century Campus.” The report and companion handbook provide a comprehensive overview of the potential for land owned by school districts to be designed and developed for teachers and other employees.

For the 2020–21 school year, Jayewardene was selected as the cityLAB Graduate Fellow, which is awarded to one student every year who demonstrates academic and research excellence. She contributed to research about building affordable workforce housing on school-owned land, which resulted in a handbook for schools, a research report and state legislation.

Cuff said that Jayewardene “embodies the range of responsibilities that architects are beginning to embrace. She is not only a talented designer, but committed to urban issues, social justice concerns and environmental goals.”

She was active on the dean’s student council, representing architecture graduate students in 2020-21.

Jayewardene co-leads the Talk+Text Film Club, an informal club for architecture faculty and students to screen and discuss architecture-themed movies that she started with fellow graduate student Claire Rosenberg. It launched in the winter of 2019 and provided a greater sense of community during the pandemic. She is also the content editor of the architecture student magazine POOL.

The landscape of lab-grown meat 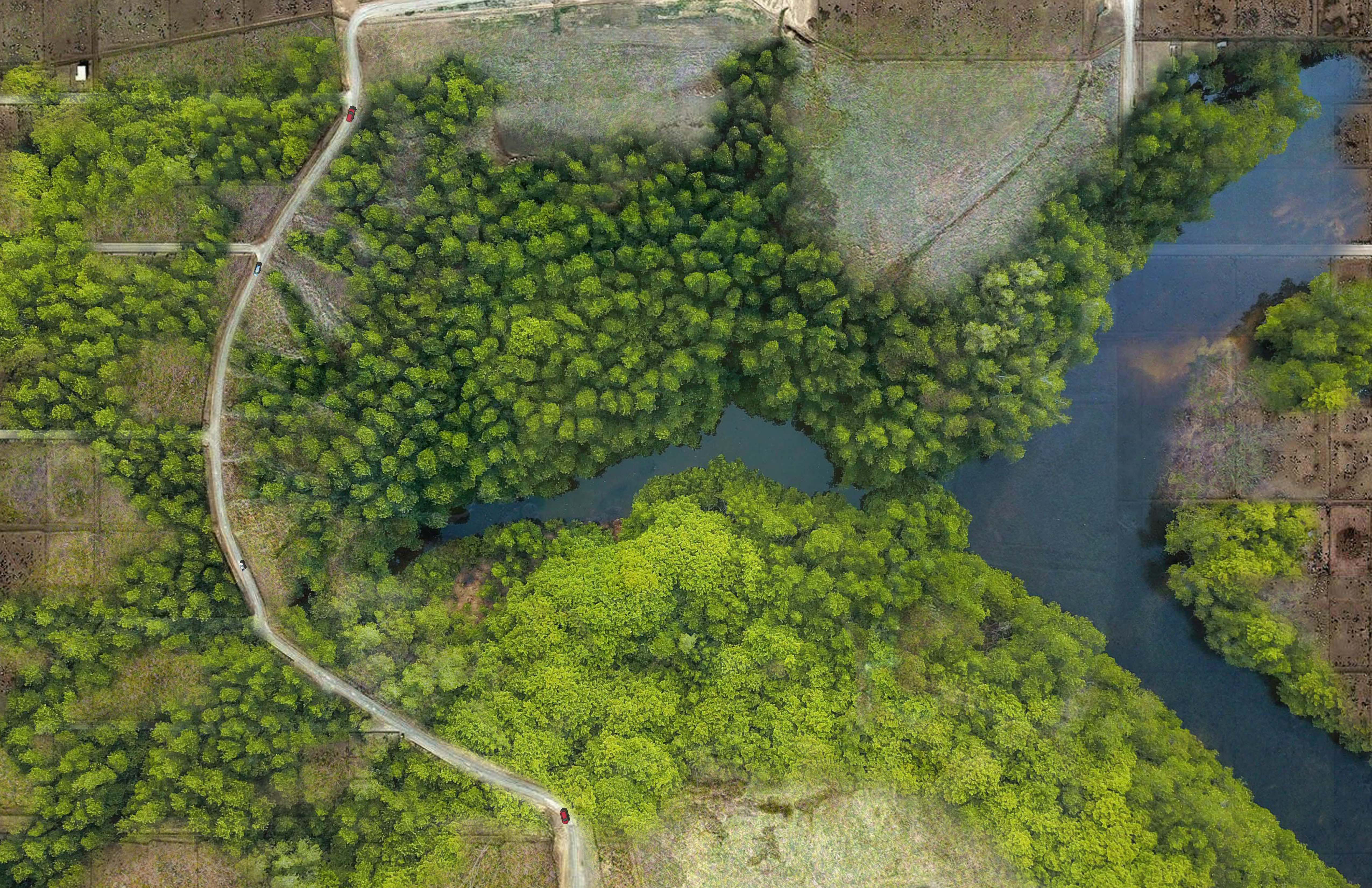 Courtesy of Akana Jayewardene
The project “Meat Culture” imagines that by 2062, the meat industry has transitioned away from animal agriculture and toward a new paradigm of synthetic and alternative protein. This image is part of a tryptic that tracks the evolution of a livestock collection pool as it happens organically, without intervention, and becomes a new biodiverse mangrove ecosystem.

Now in her final year of her master’s program, Jayewardene is working with classmate Sunay Rajbhandari and associate professor Kutan Ayata on a thesis project about the future of synthetic meat. While that might not seem like a concern for architecture students, they’re examining the generative impact that synthetic meat would have on a landscape dominated by the meat industry.

“Right now, livestock is raised somewhere, thousands of miles away on a cattle ranch or on an industrial farm, and then gets shipped to a slaughterhouse or a processing facility, and then to a supermarket, and then finally lands on your plate as meat,” she said.

Their final project will be presented as part of RUMBLE, the architecture program’s end-of-year exhibition.

Jayewardene’s plans for the future

After graduating, Jayewardene hopes to find work at an architecture studio where design work goes hand-in-hand with research and policy change. Having worked for architecture firms and at cityLAB, “I realized that design by itself doesn’t solve all the problems. And so you need things like research, policy change, and community organization and action, in conjunction with design.”

When she addresses her fellow classmates at June’s commencement, she plans to talk about an ongoing concern in academia in which some knowledge forms are legitimized and others are dismissed. Jayewardene has worked at the school-wide and departmental levels to help decolonize the art and architecture curriculum to encompass Indigenous and non-Western perspectives and solutions. She’d also like to remind her classmates of the benefits of discourse.

“I love that at UCLA and in my classes, I’ve been able to disagree with my classmates but still have a productive conversation and learn something,” she said. “It’s great when you disagree because then you get to hear a different perspective or you learn something new or you see the world in a way that you didn’t previously.”