Aomawa Shields studies the climate on distant planets. Her aim: to find those most likely to host alien life. The astrobiologist is a National Science Foundation astronomy and astrophysics postdoctoral fellow working in UCLA's department of physics and astronomy.

But she was also an actress with an M.F.A. from UCLA’s School of Theater, Film and Television That’s given her a secret "superpower" that's helped her make science accessible, a talent that’s attracted nearly 1.5 million views  of her engaging TED talk on her search for other life forms in the universe.

“I’m an African-American female astronomer and a classically trained actress who loves to wear makeup and read fashion magazines. So I am uniquely positioned to appreciate contradictions in nature,” she said in her TED talk, laughing, “and how they can inform our search for the next planet where life exists.”

In July, Shields starts a new job, as the Clare Boothe Luce Assistant Professor at UC Irvine. A participant in the University of California President’s Postdoctoral Fellowship Program, she is among 24 fellows newly hired by UC campuses this year. The program, which prepares outstanding Ph.D.s for faculty careers, has been lauded as a national model for expanding faculty diversity.

She talked to Nicole Freeling of the UC Office of the President about her unusual career path, the search for E.T. and her efforts to groom a new generation of star scientists by mentoring middle school girls in an organization she founded, Rising Stargirls.

What is astrobiology, and how does your work fit in?

Astrobiology is the study of life in the universe: how it got started on this planet, how it has evolved over time and how widely distributed it might be elsewhere. 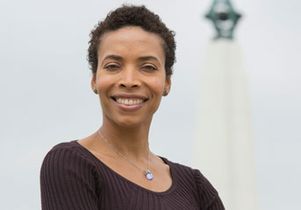 The way I come to the question of "Are we alone?" is to find planets that might have environments suitable for life to develop and sustain itself.

I use climate models of all different types — most recently, ones that are three-dimensional — to look at the collaboration between surface, atmosphere and incoming starlight and how those interactions affect the climate of a planet.

Say, there was a habitability pageant for planets. You wouldn’t want to select those that would only be warm enough for surface water under very specific conditions. You’d want planets that could be warm enough for liquid water over a wide range of atmospheres, orbits and surfaces.

Our goal is to generate a list of planets that are most likely to succeed in the habitability category. That can tell us where to point our telescopes.

What planets are at the top of your list now?

A planet was discovered just a few months ago called Proxima Centauri b. That one is particularly exciting because it is orbiting the closest star system to us — just 4.2 light years away.

How did you first get interested in this question of "Are we alone?"

I started looking up at the stars when I was 12, when my seventh grade class watched the movie “Space Camp” about this group of kids who were launched into space.

Up until that point, I wanted to be a ton of things — a Dallas Cowboys cheerleader, a secretary, an orthopedist. But it wasn’t until seeing this movie that I was, like, that’s it. And, unlike the other aspirations, this one never really went away.

Your career wasn’t exactly linear, though. You took a decade off from astronomy to earn an M.F.A. from UCLA and work as a professional actress. What led you down that path, and how has it influenced your career as a scientist?

At first, when I was in college, it seemed that science wasn’t all I thought it was cracked up to be. I was very focused on problem sets and exams, and I forgot the bigger picture: that those are the things you have to get through before you can get to the exciting stuff, which is research.

It took me a long time to feel connected to what I created as a scientist, rather than detached from it. [But] eventually, I came back to the field. I realized that this was what I was supposed to be doing.

And it finally occurred to me in grad school that this non-traditional background, which I thought had been an Achilles' heel, was actually a superpower. It allowed me to communicate the impact of my science the way some other classmates and scientists had trouble doing.

When you’re not looking for life on other planets, you run Rising Stargirls, a program that uses creative arts to inspire middle school girls to explore the stars. What interested you in mentoring young girls, and why use art as a path to science?

There was always this feeling that I had to be a certain type of scientist. There were parts of myself that I felt I had to downplay — whether it was by wearing subdued clothes, not wearing makeup, looking very stereotypically masculine, not displaying emotion.

I don’t believe that anymore.

I want young girls, especially girls of color and especially middle school-age girls — to understand they can bring all of themselves into their interest in science.

Art, writing and theater, which are more readily accepted as being personal, can be a gateway to help girls be personally invested in what they’re learning.

As a woman of color, as well as a returning graduate student, what helped you succeed in a field where you were often something of the odd one out?

In one word: mentors. The people who answered my questions by sitting down with me for 15 minutes or an hour; who gave me tips, feedback, lessons learned, things they wish they’d known; who helped me negotiate for things I needed to bring my vision to my institution.

I adopted this attitude of: Whoever has done what I want to do, I’m going to go ask them how they did it. And if they don’t want to share that with me, that’s fine. I’ll go and ask someone else.

In my experience, pretty much everyone I’ve asked for help has provided it, in whatever way they could spare. And it’s led to a series of successes that have put me in the position I am today.

The President’s Postdoctoral Fellowship Program is part of that. If I trace back what I know now about how to be a successful researcher, PPFP played a crucial role in my development.

I used to think that I was the only person who suffered from it. I remember a lecturer at a workshop asking if anyone had experienced imposter syndrome, and everyone raised a hand — including professors who were white males. It’s more of a wide-ranging phenomenon in academia than I would have ever anticipated.

But at least for me, as someone who comes from a community that has historically been marginalized — both as a woman and as an African-American — the propensity to be susceptible to imposter syndrome is especially acute. And, as an older, returning student, I had this feeling that, "Oh my gosh. Everyone who is 20-something has the jump on me. They remember more. They were just in physics courses two months ago, and for me it’s been 11 years."

As scientists, evidence is what we value most highly. It’s about following what the data say, not letting preconceived notions dictate your conclusion.

I’ve had to take an active role in looking at the evidence. I’m a visual person, so actually being able to read the email that said, "You passed your qualifying exam" or looking at the 4.0 that I got in extragalactic astronomy — those things helped me to retrain my mind.

What that’s done for me is to take those old voices saying, "Everyone else but you is a part of this field," or "You can’t do it," and dial the volume way down — so that it’s chatter in the background as opposed to it becoming an obstacle to proceeding with one’s day or one’s academic career.

Any parting words of advice for aspiring scientists?

My personal mantra is it’s never too late. The "shoulds" can be debilitating. If possible, I’d say eliminate that word from your vocabulary. It’s about: What do you want now, and who has it? And what can you do to get it too?