When L.A.’s Griffith Park mountain lion crawls under someone’s house, or a brother-and-sister pair become the first mountain lions with tracking collars to cross a freeway since 2009, Seth Riley is at the top of the list of scientists who can answer the questions everyone’s asking. Why would a mountain lion nap in a crawl space? Do mountain lions often go into residential areas? How hard is it for a mountain lion to cross a Los Angeles area freeway?

Riley is an assistant adjunct professor at UCLA’s department of Ecology and Evolutionary Biology, and collaborates with UCLA’s La Kretz Center for California Conservation Science, part of the Institute of the Environment and Sustainability. He’s also a wildlife ecologist for Santa Monica Mountains National Recreation Area, part of the National Park Service. Through the partnership between UCLA and the NPS, he focuses on the conservation of species big and small, from mountain lions to endangered red-legged frogs.

He and his colleagues have been in demand recently. The lion known as P-22 caused a media circus on April 13 when he was found napping in an unsuspecting homeowner’s crawl space in the Los Feliz area of Los Angeles, adjacent to Griffith Park. On March 9, P-33 became the first Santa Monica Mountains puma with a tracking collar to cross a freeway in six years. In late April, the Park Service announced that P-33’s brother, P-32, followed his sister across U.S. 101. Riley gave UCLA Newsroom the inside details.

Update: On Aug. 13, 2015, the National Park Service announced that P-32 was struck and killed attempting to cross Interstate 5 near Castaic, Calif.
You started studying and tracking these mountain lions 13 years ago, and until this year only one of the animals tracked by the study had crossed a freeway without being killed. Suddenly, the National Park Service announced that you had two more within a month. Did P-32 see his sister on the other side of the freeway and follow her across? 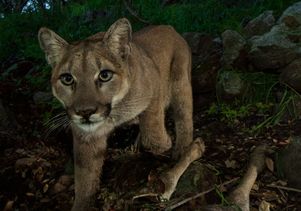 National Park Service
P-33, who recently made news for crossing a freeway, takes a break from her meal to investigate a National Park Service camera in March 2015.
He didn’t cross in the same place as her. But it’s possible he had some idea that she crossed. We don’t know much about how they perceive each other. It seems like they pick up on olfactory cues, so that may have been a factor. But that area is also where they live and explore, so it’s not unusual that P-32 was sniffing around the area. They’re about 18 months old and dispersing from their mother now, so they’re looking for their own territory.
You’ve tracked 40 mountain lions over the past 13 years. Why is it so hard for them to successfully cross the freeways that hem them in?
We get tons of awesome data from the GPS collars, but we still don’t know what they’re thinking. But in the areas that P-33 and P-32 crossed, we’ve had many of our mountain lions come right up to the freeway and then walk away. And part of what made it so exciting to see 33 and 32 get across was that they seemed to have been trying hard to get out of that area. They lived with their mother, P-19, in the west end of the Santa Monica Mountains, and that’s where the [2013 Springs] Fire burned about a sixth of the park. It seemed like they were bouncing off the freeway and agricultural areas. And then one day we looked at the GPS data and P-33 was across 101.
The problem is 101 is a huge development corridor, and there’s almost nowhere left that has natural habitat on even one side of the freeway, let alone on both sides. That’s why we are so focused on getting a wildlife crossing built. There’s a very small population of mountain lions trapped by the freeway, and that leads to them breeding with close relatives, and likely leads to an increase in lions killing each other.

What are the brother and sister up to now that they’ve crossed 101?

They crossed around the Conejo Grade, which is a huge hill that slopes down between Thousand Oaks and Camarillo, where there’s actually a lot of natural habitat on both sides of the freeway. But the problem is that on the north side, you quickly get into an area that’s pretty developed. There’s a very thin corridor of open space between Thousand Oaks and Moorpark, and P-33 kind of found that, but then there’s another freeway, 23, and she bumped into that and turned around.

A few weeks later her brother also crossed 101 in the same general area, about a mile east. We don’t know exactly where. We have a data point [from the tracking collar] at midnight south of the freeway, and then another point north of the freeway at 2 a.m. for both of them. Then P-32 didn’t find the same open-space corridor as his sister, but went through the Santa Rosa Valley through some low-density residential areas. What’s exciting and interesting is he actually made it across highway 23, near the Ronald Reagan Presidential Library, and he’s now in the core part of the Simi Hills. 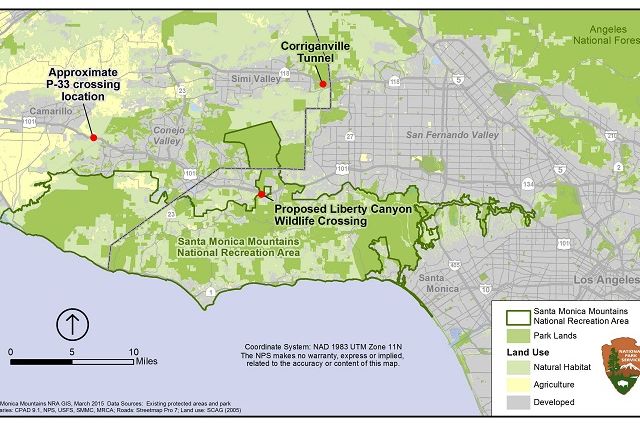 National Park Service
The cougars crossed 101 between Thousand Oaks and Camarillo. They'd have better luck near Agoura Hills, where there's more natural habitat.
That must have been exciting. Were you looking at the computer where the GPS data comes in, just hitting refresh, refresh, refresh?
We know what time the data will come in. We get eight data points a day: every two hours from 6 at night to 6 in the morning, and then one in the middle of the day at 2 p.m. Especially when things happen like crossing the freeway, it would be great to have data points every minute, because then we could say with certainty where they crossed. But the more intensively you collect data, the less time you have until the battery in the tracking collar dies. So then you have to recapture and re-collar the lions, and that’s stressful for them. And us.
Will P-32 and P-33 be happy in their new territories?
It will be really interesting to see, because in general the Simi Hills seems to be too small as a territory for an adult male – but then, P-22 in Griffith Park has thrown off all of our theories, right?
And the Griffith Park mountain lion seems to have a wider view of his habitat than Los Feliz homeowners might like. Why would he go under a house? 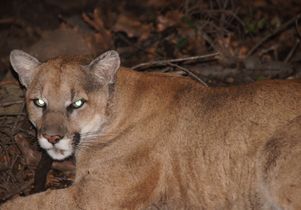 National Park Service
P-22, the Griffith Park mountain lion.
Mountain lions can be active during daylight hours, but they often like to hang out somewhere cool and dark during the day.
Do you think he’d been there before?
We can’t be sure...since you can’t get a good satellite signal under a house. But we know he wasn’t living there for months, because we have eight GPS points on him every day for the last three years, so we know he’s spending most of his time in the park. He was going regularly into the neighborhoods that jut into the park, but this particular neighborhood he had only been into once or twice. We have a data point at 6 a.m. the day he was found, and he wasn’t under the house yet. Then once the media left around 1 a.m. and all the lights and noise and craziness stopped, we have a data point at 2 a.m. showing he’d left.
But he regularly goes into the residential neighborhoods?
He spends the vast majority of his time in the park – that’s something we see with all the lions, and P-22’s numbers will be a little different, but in general, less than 1 percent of their data points are around urban areas. But P-22 has definitely been in the residential areas. Keep in mind, it’s super steep with these big fancy houses up on the road, and deep canyons in between. He makes kills in those canyons, it looks like. It’s not surprising that there would be deer in those ravines, although unfortunately we can’t usually get to those kills because they’re behind everyone’s fences, and we’re not really excited about knocking on people’s doors and saying, “Hey, there’s a mountain lion behind your house.”
Are people in danger?
Our experience is there’s essentially no danger. We’ve studied 40 mountain lions over 13 years, living next to and in the second-largest metropolitan area in the country, and never – knock on wood –seen or heard of any aggressive mountain lion behavior toward people. Certainly, people need to be careful of their pets if they live near open space, although that predation more often comes from coyotes. We have investigated close to 500 mountain lion kills, and never found a single pet. Something like 90 percent of the kills are deer, and the rest are things like coyotes, raccoons or badgers. And you’ll see – at the zoo, for instance – mountain lions will track the smaller people, so you want to keep smaller kids close if you’re in potential mountain lion country. But in our study and several other urban ones, we’ve seen no evidence of any aggression toward people.
How does the collaboration between the National Park Service and UCLA help you learn more about the animals you study?
UCLA provides the genetic and forensic work. The Robert Wayne Lab tests the DNA that tells us about the genetic diversity – that’s what confirmed that the freeways are not just a physical barrier, but are also blocking gene flow. Those DNA tests also helped us build the family tree, and it’s how we determine who’s the father of a new litter of kittens. When a mountain lion is killed, we’ve used the blood on her claws to identify which mountain lion killed her.
I also have graduate students who I advise through the department of Ecology and Evolutionary Biology, and post-docs who I work with through UCLA’s La Kretz Center for California Conservation Science. Eric Abelson is looking specifically at how and where animals cross roads, and how to reduce mortality. And John Benson is doing population modeling of our mountain lion population to conduct a population viability analysis, determining how long this population can last.
With the freeways acting as moats and trapping the mountain lions in a much smaller territory than needed for so many cougars, the animals often attack and kill each other or end up inbreeding. What will happen to them over the next few decades if we don’t build more wildlife crossings?
If there’s no increase in connectivity to other natural habitats, the genetic diversity will likely continue to decline, and eventually you’ll end up with genetic defects. Some that we’ve seen in other small populations of mountain lions are cosmetic, like kinked tails, but also atrial septa – a hole in the heart – or sterile males. That’s why it’s so important to have wildlife crossings that let animals move freely to other habitats. That’s something that’s important and helpful to all the park’s animals, and plants, too, but the mountain lions capture people’s attention and are the most vulnerable because their population is so small.
The fact that you still have mountain lions in Los Angeles is pretty amazing. L.A. is a mega-city, a metro area of 10 million people or more. There are only two in the U.S. – L.A. and New York – and only about 30 worldwide. Los Angeles is probably the only mega-city in the world with a major carnivore. That speaks to the amazing conservation of wildlife and habitat in Los Angeles, but it’s something we may not have much longer.
Tags: environment | Los Angeles | UCLA in the community | faculty news
Share