"KNBC" by UCLA professor of digital media arts Casey Reas is an audio and visual distortion of television signals broadcast during December 2015. The signals were captured and archived at the artist's studio in Los Angeles. Turn up the sound as you watch this video that captures a few minutes of a continuous, generative collage.

To UCLA visual artist Casey Reas, writing computer code and programming are not so much technical skills as “thinking” skills that he has managed to apply to artistic expression to great effect.

“It’s a very interesting and powerful way of thinking that doesn’t have a specific domain,” Reas explained. 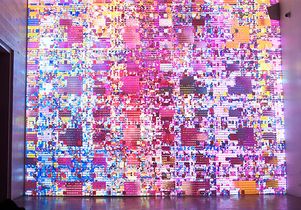 Reas, a professor of design media arts, initially became engaged in computer programming in 1997 when he found it difficult to represent his subjects through drawing and other traditional artistic methods. To work around this, he learned to write software that drew thousands of lines simultaneously.

After earning his bachelor’s degree from the College of Design, Architecture, Art, and Planning at the University of Cincinnati, Reas went on to receive his master’s degree at MIT, where he worked as a part of the MIT Media Lab’s Aesthetics + Computation group, a research group led by professor John Maeda.

Processing, however, represented a middle ground, Reas said; while it was created to be used in the context of visual media, it’s also very similar to some of the most often used programming languages, making it much more robust.

A handbook for the language, “Processing: A Programming Handbook for Visual Designers and Artists” was published by MIT Press in 2007. After the language had been used by artists and designers for more than a decade and undergone further development at UCLA, Carnegie Mellon, and New York University, among others, a second edition was released.

“It’s a way of bringing people working with technology into the arts and a way to bring people who are working in the arts into technology,” Reas said. “It’s a space where both ways of thinking can feel comfortable.”

Today, Reas, an internationally acclaimed artist, has managed to integrate software and various technologies into his many artistic endeavors. His work has been exhibited around the world, including at the San Francisco Museum of Modern Art and the Art Institute of Chicago, and he has received commissions from the Whitney Museum of American Art and the New World Symphony.

In addition to teaching programming and software development at UCLA, Reas serves on the Humanities, Arts, Architecture, Social and Information Sciences Collaborative that’s organized under UCLA’s Institute for Digital Research and Education. The broad-based collaborative includes faculty from the humanities; theater, film and television; arts and architecture; physical and social sciences; and the Graduate School of Education and Information Studies.

While traditional lectures are a part of Reas' teaching approach when it comes to programming, much of what his students learn occurs during studio time where they develop their digital arts projects.

Reas said he doesn’t just evaluate how well his students understand coding and whether they can solve problem sets, he prioritizes the experiences they create with their digital tools.

“We look at the code in order to realize these experiences, but it’s not what the classes are primarily about," Reas said. "In my classes, the code is a means to an end."

Ths story was adapted from one posted on the Institute for Digital Research and Education website.