In the early morning quiet that blankets UCLA, there is a rush of energy that stirs the Spieker Aquatic Center. There, you will find swimmers — including many UCLA students, staff, faculty, retirees and alumni — suiting up at 5:45 a.m. for a common purpose: to challenge themselves to be just a little bit better than they were yesterday.

They are members of the Bruin Masters Swim Club, which has been part of UCLA’s recreational sports culture for more than 20 years. The swimmers, whose ages range from 18 to late 80s, train at UCLA under the encouraging — yet firm — direction of Erika Stebbins. They participate at varying frequencies in the more than 20 early- and mid-morning and evening practices that take place at UCLA’s swimming pools each week.

“Swimming by yourself can be really tough, so I think these people come not only because they like swimming, but it challenges you to be a little bit better that you might be just on your own,” said Stebbins, a five-time U.S. national champion who competed for the United States at the 1988 Olympic Games in Seoul, South Korea, in the 400-meter individual medley and again at the games held in Barcelona, Spain in 1992 in the 400-meter individual medley, 400-meter freestyle and 800-meter freestyle. “When you have people around you have a social element and it makes it more fun and you push yourself a bit more.”

Stebbins, who began coaching the masters team in 2010 after a 15-year NCAA coaching career, including four seasons with the UCLA Bruins women’s swim team, was named 2017 Coach of the Year by Southern Pacific Masters Swimming, an association of more than 90 clubs across California and parts of Nevada.

She was lauded for strength in coaching; her contributions to the local masters swimming committee, a regional governing body, by hosting meets and providing coaching clinics; and for her previous service as chairperson of the group’s coaches. 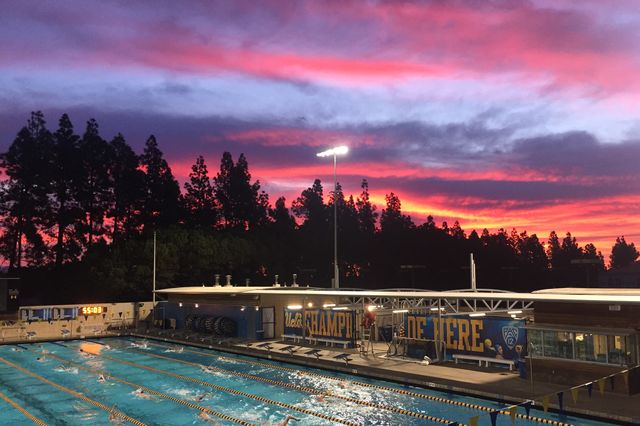 “I was surprised,” said Stebbins, between yelling out tailored instructions to swimmers in 8 lanes during a recent 10 a.m. club workout at the Student Activities Center pool. “I didn’t know I’d been nominated … I have a pretty enthusiastic group that likes to race and like to challenge itself. In a way it drives me to be more enthusiastic. I’m honored to have gotten this award, but I feel like it’s a reflection of all of us, not just me.”

Stebbins said coaching this team is much different than coaching NCAA swimmers because the masters swimmers have a broad range of skill levels, abilities and goals. Most, she said, are in the pool to stay fit and to spend time with other swimmers.

“This isn’t like coaching college swimming, where you have to tell them ‘you have to do it this way,’” she said. “I have to practice some flexibility because of why they’re here. Some people have injuries and they have to adjust in order to be able to do this. I can’t be ‘it’s my way or the highway.’ It’s my job as the leader to make sure that I manage everyone and make sure it’s cohesive. This is a choice for people. We all work together.”

She said it’s wonderful to be part of an organization that brings so many people from different walks of life together in the name of fun and fitness.

Among them are two former Olympians as members, as well as doctors, lawyers, entertainment executives, actors and scientists, among others. There is also a trio of men in their 80s who are always on time and ready to go at the crack of dawn.

“They’re here every morning at 5:45 a.m.,” said Stebbins, even on recent mornings when early morning temperatures have dipped into the low-40s. “That’s dedication.”

The Bruin Masters Swim Club started in 1995 with 10 members, some of whom continue to work out with the team all these years later. Today there are about 215 swimmers. For those interested in competition, Southern Pacific Masters Swim Club events are held every weekend, including three annual meets that take place at UCLA. The next campus meet will be held at the Spieker Aquatic Center on April 8. 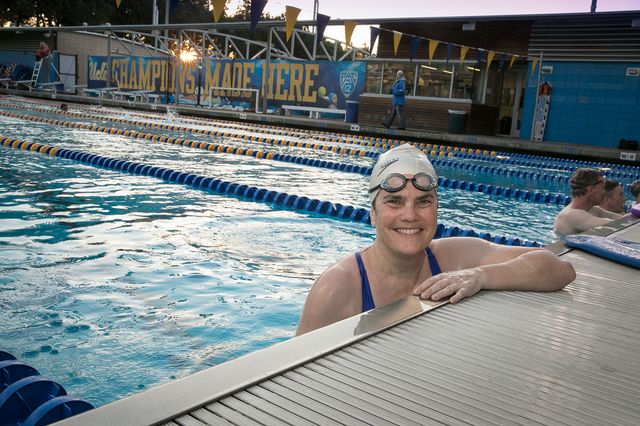 Reed Hutchinson/UCLA
Andrea Ghez, UCLA professor of physics and astronomy, is a founding member of the Bruin Masters Swim Club, which was established in 1995.

UCLA physics and astronomy professor Andrea Ghez, a world-renowned expert on the role of black holes in the evolution of galaxies, was also one of the first people to join the team back in 1995. She joined the team along with her husband, who, like Ghez, continues to swim with the team several days a week. The couple met as graduate students after joining a master’s swimming club at MIT. (Coincidentally, Stebbins met her husband, Tom, at the pool. Tom Stebbins is UCLA’s head diving coach. The couple met when both were on the UCLA Department of Athletics coaching staff.)

“It’s been really fun to see the team grow into this enormous endeavor at UCLA,” said Ghez, who says this team and its members are an important part of her life. “I have to say it’s one of the wonderful things that allows campus to connect with itself in interesting and unusual ways in the sense that I get to meet not only other faculty, but also students and staff and people in the community. It’s a very leveling activity because you’re all in the pool. There’s no hierarchy, with the exception of how fast you are. In terms of what you do for the university, that’s erased.”

For Ghez, swimming helps her unwind and to look at problems from new angles.

“Often you can solve problems when you’re not looking at them directly, so I often find that I can work things out in the pool. It’s almost like my form of meditating.”

She said she appreciates the positivity that Stebbins exudes as a coach and admires the commitment she makes to the team.

“Erika encourages us to do the best we can, and really appreciates what it means to be an adult swimmer,” Ghez said. “She has adults in there who are absolutely dedicated full-time to the endeavor of being an athlete and then she has a lot of people like me for whom it’s important to keep swimming just to be healthy, both physically and mentally. ... She has incredible ability to accept and understand and encourage us to be our best in our own context.”

And what about those early morning practices?

“I love watching the sun come up every morning,” Ghez said. “It’s inspiring. You get to practice and it’s pitch black. I’m an astronomer, so I actually really like this from a professional perspective. Sometimes you see the moon, sometimes you don’t. It really reminds you that you’re on this tiny little planet and then you see the sun rise and every morning it’s different. It’s kind of a reminder that every day is a brand new start, every day is different.”