With his five-year journey to a Ph.D. from the UCLA Henry Samueli School of Engineering and Applied Science culminating this June, Perry Roth-Johnson encountered a daunting new challenge: finding a job.

For the aerospace engineer, tasks like designing and testing high-performance blades for wind turbines came easier than exploring the employment landscape, writing a resume and going on job interviews. But with help from UCLA’s Graduate Division, the Career Center and a host of other campus entities, Roth-Johnson has a job waiting for him at the California Science Center, where he’ll meld his passions for research and education as a researcher on a team developing a permanent exhibit for NASA’s retired Space Shuttle Endeavour.

Roth-Johnson is just one of hundreds of UCLA graduate students and postdoctoral scholars who are benefiting from a plethora of services and tools to help prepare them for successful and satisfying careers — from one-on-one career counseling and online career-planning software to leadership skills workshops and networking events.

Career assistance isn’t new for UCLA; as far back as 1926, students found jobs through UCLA’s Bureau of Occupations, which evolved into the Career Center. UCLA’s Graduate Division, professional schools, academic departments and other campus units have also long provided students with career assistance.

What is new is a push for greater campuswide collaboration to create “a campus-wide culture that acknowledges that the career, professional and academic development of our graduate and professional students and postdoctoral scholars is a shared responsibility.” That goal was set out in a 2013 report by UCLA’s Graduate Student Welfare Committee, which found that many graduate students and postdoctoral scholars wanted more to be done to increase and improve campus career services.

The report also pointed to a steep national decline in higher education job opportunities traditionally pursued by freshly minted Ph.D.s. — a decline that’s been on the Career Center’s radar for some time.

“Last year, 50,000 doctorates were awarded nationwide and only 16,000 new professorships were listed,” said Annie Maxfield, the center’s associate director of Graduate Student Relations and Services. “We’re producing a lot of Ph.D.s for a particular workforce that doesn’t have the capacity to hold them.”

Professor David Schaberg, dean of the Humanities Division of the UCLA College of Letters and Science, recently led faculty, students and administrators in a forum to discuss alternative academic pathways that might, for example, see students focusing less on published research and building their curriculum vitae and more on developing general knowledge in their fields with broader application.

With funding from UCLA’s Student Fee Advisory Committee, the campus has responded emphatically to the graduate student report.

“There are now higher levels of collaboration between central units to make things more efficient and reduce redundancy,” said April de Stefano, the Graduate Division’s director of academic services and co-author of the report. A host of new initiatives has also been launched, including dozens of workshops on topics like writing a resume, ramping up public-speaking skills and starting a business. 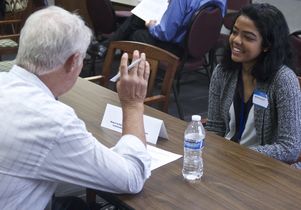 A student gets career advice from a UCLA alumnus during the Master’s and Ph.D. Career Conference on May 1, which drew more than 400 graduate students and postdoctoral scholars.

A new Career Hub website pulls together a calendar of career-related news and events from all over campus. Also on the hub are resources like MyIDP (Individual Development Plan), a powerful online tool that grad students and postdocs can use to create individualized “career roadmaps” that incorporate career goals and action plans, and track their progress.

Aerospace engineering student Roth-Johnson made extensive use of MyIDP. “At first, I used it to get a sense of my priorities … through the surveys and the readings provided in MyIDP,” he said. “Later, I used it to keep track of my notes from about 15 informational interviews that I conducted during my job search.”

Alex Dooraghi, a student in the Molecular and Medical Pharmacology Interdepartmental Ph.D. Program, turned to MyIDP when his faculty adviser informed him he can graduate this June — much sooner than Dooraghi anticipated.

“I was unprepared for the next step,” the doctoral student said. What he knew for sure was that he enjoys research. For his dissertation, he explored new ways to synthesize the radioactive “radiotracer” compounds used in Positron Emission Tomography (PET) scans.

Dooraghi honed in on his next moves in a four-session MyIDP workshop led for a cohort of 40 students by the Career Center’s Kristy Sherrer,  who was recently brought on to expand services for graduate students in STEM (science, technology, engineering and mathematics) fields. Dooraghi decided to focus on postdoctoral positions in universities and national labs, as well as engineering jobs in industry.

He also took part in a STEM Networking Night for graduate students put on by the Career Center. “I actually discovered one company through the networking event, applied for a postdoctoral position and had a phone interview,” Dooraghi said. “I’m unsure I would have discovered the opportunity otherwise.”

Both Dooraghi and Roth-Johnson have profited from confidential counseling with Sherrer. “Meeting with her definitely strengthened my resume and cover letter,” said Dooraghi, adding that she coached him on doing interviews, which made him feel more confident. And when Roth-Johnson was offered the job at California Science Center, he said, “Kristy advised me on how to negotiate the offer."

Momentum continues to build as faculty, administrators and students form workgroups to define core competencies and transferrable skills that graduate students and postdoctoral scholars need to flourish in a wide range of workplaces.

Said the Career Center’s Maxfield, “Ph.D.s are highly analytical, they’re problem solvers and they’re more mature. They typically have exceptional writing and research skills, and they can do a variety of things, from working well on a team to managing complex projects.”

Earlier this month, the Career Center, Graduate Division and other campus collaborators hosted an ambitious, daylong career conference that connected 422 graduate students and postdoctoral scholars with 98 UCLA alumni who have successful careers in fields within and beyond the scope of their graduate degrees. Portions of the conference, along with other career-related information, is posted on the Career Center's Careerious Grad blog.