Chelsea Manning, a transgender activist and former U.S. Department of Defense intelligence analyst who was convicted of espionage, spoke at Royce Hall on March 5. Her Luskin Lecture, “A Conversation with Chelsea Manning,” focused on topics including ethics in public service, transgender rights activism and resistance in light of advancing technologies.

Manning was sentenced to 35 years in prison for handing over to WikiLeaks sensitive documents that demonstrated human rights abuses related to American military action in Afghanistan and Iraq. While serving her sentence, Manning began her medical transition from male to female after having publicly announced her gender identity.

Her sentence was commuted by President Barack Obama in 2017, after she had served seven years of her sentence. Since her release, Manning has been an outspoken advocate for LGBTQ rights, as well as government transparency. In 2018, she announced her run for the U.S. Senate in Maryland.

Manning spoke with reporters at a press conference prior to the Luskin Lecture. Asked if she had any advice for UCLA students, Manning said: “Think on your own. Don’t read a book and think you know everything. Question yourself and debate other people.”

Manning noted the significance of speaking to a crowd largely made up of students. “I like to speak to students who are going to be in positions of making decisions, or being in media or working with technology,” she said.

Manning said that when she works with students she focuses on topics beyond technology — like civic engagement.

Manning continued her student outreach the day after the lecture at a workshop co-sponsored by Luskin Pride and the school’s LGBT+ Council. She led about 60 Luskin students in a wide-ranging dialogue about military tactics in law enforcement, communities abandoned by the left and whether universities are complicit in government surveillance.

“A system is legitimate because you give it legitimacy,” she cautioned the students. 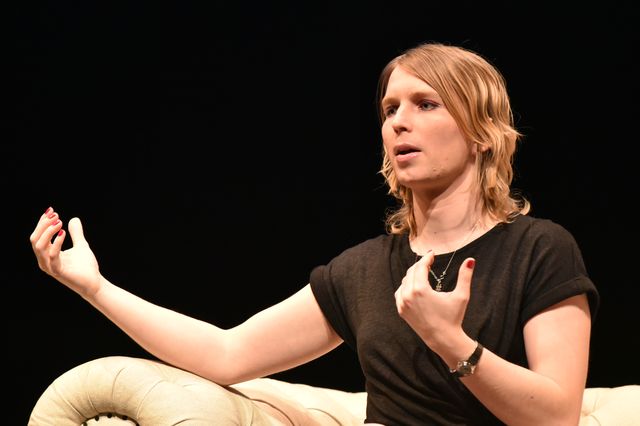 UCLA Luskin Dean Gary Segura introduced Manning at the Royce Hall lecture and acknowledged the controversial nature of her appearance.

“There are some in this room who think Ms. Manning is a traitor,” Segura said. “A number of UCLA students asked me to rescind her invitation and reminded me that her actions may well have cost the lives of American servicemen and women. For the record, the Luskin School is opposed to treason.

“Others,” he added, “will argue that her actions, laying bare war crimes, acts of torture and the extent of civilian casualties, might well have saved the lives of some of those non-combatants. For the record, the Luskin School is opposed to war crimes.”

Moderator Jim Newton, lecturer in public policy at UCLA Luskin and editor of Blueprint magazine, began with a conversation about Manning’s conviction. Manning said she feels her actions reflect her true self.

“I have the same values I’ve always had,” she said. “I acted on those values with the information I had.”

As an intelligence analyst deployed in Iraq, Manning took a data-based approach to the American presence in the country. Over time, she came to understand the humanity behind the data. “It was a slow realization that what I was working with is real,” she told the audience.

At one point, Newton asked Manning if she thought the government had a right to keep secrets.

“Ten years ago I would have said, ‘of course,’” Manning said. “But who even makes these classifications?”

Manning went on to discuss what she sees as the political nature of classified information. She spoke at length about the process for data classification and her skepticism about its role in protecting national security.

Newton asked Manning if she sees herself as a role model. Manning said no, and then described the role model she would like to have had, adding she has aspired to be that person, though it has been challenging.

“I went from being homeless to being in college to being in the military to being at war to being in prison,” she said. “I haven’t had the time to do the things people are expected to do.”

Following the lecture, Manning held a question and answer session with Ian Holloway, professor and assistant chair of social welfare at UCLA Luskin. The chat, which focused largely on Manning’s identity as a gay man and later a transgender woman in the military, was held in front of a small group of UCLA Luskin board members and friends of the school.

Holloway asked Manning about her being a whistleblower. Manning said she didn’t agree with the term.

“I’ve never used the word ‘whistleblower’ to describe myself,” she said. “I’ve never really related to it because it’s hard to reconcile.”

She added that she felt her actions, regardless of their classification, were just.

“Institutions do fail, and when they do, you can’t rely on them, you have to go around them,” she said.