With one foot solidly in the past and the other anchored in digital technology, Tobias Higbie is adept at keeping his balance in both worlds as a historian who is skilled in digitizing historical records and using them to gain new perspectives.

An associate professor in history who teaches classes on U.S. history, labor and social movement history, labor studies and digital humanities/history, Tobias is a firm believer in doing interdisciplinary research that allows for the integration of new methods, concepts and strategies when documenting the past. 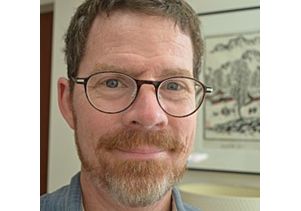 “We’re eclectic, and our toolbox can be varied,” Higbie said. “It is detrimental to get too caught up in one’s own discipline since good ideas are all around us.”

A labor historian, Higbie has completed a project to convert a century-old book on U.S. labor into a research and teaching database with the aid of colleagues from the UCLA Library and Center for Digital Humanities.

The reference book, the “American Labor Who’s Who,” is a directory of activists in the fields of trade unionism, immigrant rights, civil liberties, cooperatives, and progressive and radical politics. It was originally published in 1925, an especially contentious moment in labor history, he said.

The printed book is like many other out-of-date directories that suffer lonely lives on dusty library shelves. But since the book was digitized, it has become an invaluable source of information for Higbie and many other researchers.

From this database, the historian has been able to extract some remarkable conclusions about the nature of the labor movement, which he sees as an abstraction. By organizing the historical data into digital form, he said he was able to more easily comprehend the data and unravel the complexities and hidden relationships of one of the most important social movements in U.S. history.

“Through network analysis, you can make some interesting discoveries about the contours of the social formation that we call the labor movement,” he said.

By building network charts from the database, Higbie could identify people who were involved in both trade unionism and the political labor movement. He also began to better understand the world of fraternal organizations, such as the Masons and the Knights of Pythias, which were important social networks during the early 20th century.

In reviewing labor history, he began to understand the relationships between U.S. labor leaders and organizations more clearly instead of seeing labor parties and trade unions as distinct groups. To visualize these relationships, he utilized network graphing. Later he came to realize that the visualizations themselves are abstractions that are quite difficult to communicate — which is one of the challenges he faces in his research.

To help students develop the ability to quantify and visualize data, Higbie asked them to examine the database from “American Labor Who’s Who” and construct narratives from the data. By engaging his students in this task, Higbie said they were learning crucial skills required for today’s historians..

Many people are attracted to the field of history, according to Higbie, “because they don’t like numbers, but if you don’t have a basic understanding of charts and figures, it’s easy to be lied to.”

In the future, Higbie hopes to use the data he has collected on labor history and incorporate it into Google Maps. This information can then be used to create historical walking tours of urban areas, he said.

Being a part of the Humanities, Arts, Architecture, Social and Information Sciences Collaborative in the Institute for Digital Research and Education has helped connect Higbie to additional resources to launch his digitization projects and understanding the lay of the land technologically.

Higbie hopes to encourage other historians to pursue interdisciplinary work and engage with digital humanities.

“Since historians have a very useful perspective of a critical eye and have a long chronological sense of how things change and stay the same, it is important that historians be more engaged with digital publishing,” he said.

This is an edited version of a story running on the Institute for Digital Research and Education website.