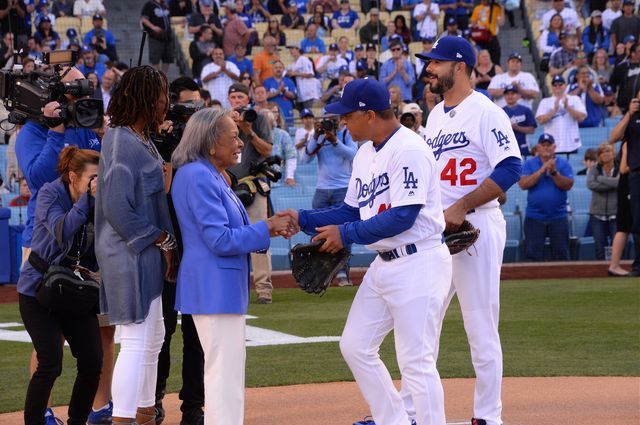 Los Angeles Dodgers manager David Roberts, who graduated from UCLA in 1995, remembers his four years as a student and Bruin athlete as some of the best of his life. Going to basketball and football games and playing baseball at Jackie Robinson Stadium are among his favorite memories.

“But, for me, just the daily walk up and down Bruin Walk every day was something that made me realize just how fortunate I was to go to UCLA,” Roberts said recently. “When I talk to my kids about where they can go to school, [I tell them] UCLA just really impacted me, from the professors to the student body. [It’s] a really special place.”

So it’s no surprise that Roberts, who has begun his second season in the Dodgers’ dugout, has kept close ties to his alma mater after a career of playing and coaching around the major leagues. 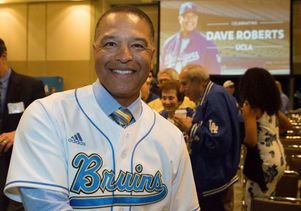 Roberts recently talked about his close relationship to Bruin sports — as well as Bruins in Major League Baseball — as he and the Dodgers get ready to host the Bruins at UCLA Night at Dodger Stadium on Friday, April 28, when the team takes on the Philadelphia Phillies.

At a recent pre-game ceremony that linked UCLA with the L.A. Dodgers, past and present, Roberts welcomed Rachel Robinson, Jackie Robinson's widow, and family members on the field, following the unveiling of a statue of Jackie on April 15, the day when all Major League Baseball teams annually celebrate the breaking of the color barrier by one of UCLA's most honored alumni. 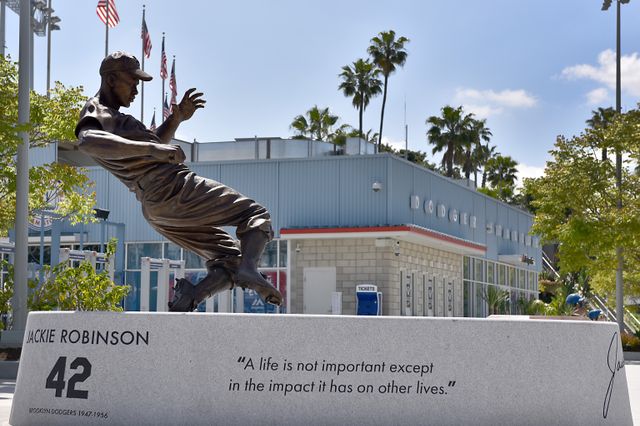 “I know that Jackie was very proud about his time at UCLA and how that university just really embraced him, and I feel the same way,” Roberts said. “There’s a lot of pride in knowing that one of the great social icons in our lifetime spent his years at UCLA. He paved the way for a lot of people, and for me to continue to extend his legacy is a big responsibility that I take a lot of pride in.”

Roberts said he sees some striking parallels between his Bruins and his Dodgers.

“It's really hard for me to put into words, but emotionally it's over the top. You know, UCLA's got a worldwide brand. And we feel that the Dodgers have that same brand,” the manager said.  “And there are only so many universities or sports franchises that can even come close to entertaining the thought of rivaling the Dodgers or UCLA."

The Dodgers manager has high hopes for his second season with the team. In his first season as Dodgers’ skipper, the team won the National League’s Western Division, but fell to the eventual World Series-winning Chicago Cubs in the next round of the playoffs. The experience nevertheless proved valuable to Roberts.

“You can't make everyone happy,” Roberts said. “There were a lot of things that didn't go the way we had hoped, but there's always tomorrow. I just really have great coaches, and the thing for me is just having a process in place to make the best decisions for our club. I've got a lot of good support. For me, that's something that I want to continue to trust in.”

Bruins will have a chance to share in that mutual pride when the Dodgers celebrate UCLA Night. Roberts is hoping for a big blue-and-gold turnout.

“It's a great mix, and it's going to be a lot of fun,” Roberts predicted.

UCLA students, faculty, alumni, and fans are invited to wear blue and gold to the game against the Philadelphia Phillies. Following the game, there will be fireworks presented by Denny’s.