Ely Guerra, an internationally acclaimed singer-songwriter from Mexico, showed the UCLA community last week why her artistic activism on behalf of women, indigenous people and environmental issues has captivated residents living on both sides of the U.S.-Mexico border and elsewhere.

As the first Mexican woman to be appointed to a UC Regents’ Lectureship at UCLA, Guerra spent Oct. 20-22 at UCLA to meet with students and scholars; participate in a discussion in a Spanish class studying Mexican cultures through literature, film and music; and give a free concert to a capacity audience in Schoenberg Hall.

Guerra received a Latin GRAMMY for “Best Alternative Music Album” in 2010 and was featured on the cover of TIME magazine as one of the “most promising performers in the Mexican rock scene.” 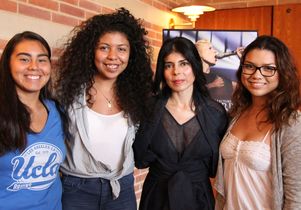 Shown with UCLA students, singer-songwriter Ely Guerra (third from the left) is "a truly transformative artist and activist," said a faculty member, and a role model for young Latinas.

“Ely Guerra is an internationally acclaimed artist whose artistic and intellectual interests include literature, film, art and fashion, and who has used them all for positive statements on women's independence and creativity,” said Héctor Enrique Calderón Valle, professor and chair of the Department of Spanish and Portuguese, who hosted Guerra in his class. “It makes absolute sense to have her here at UCLA as a model for our students, especially our Mexican-American and Latina students. She shows that UCLA, Los Angeles and Mexico have much in common.”

Having Guerra here to lecture and perform highlighted the importance of connecting to that part of the world, said some students and scholars who met with her. “To have Ely Guerra receive the award of Regents’ Lecturer reinforces the importance of the Latino community at the university,” said Christian Bermúdez, a doctoral student in the Department of Spanish and Portuguese. “Hopefully her visit will pave the way for many more Latin-American artists.”

Guerra also felt that exchanging ideas with UCLA students was energizing. “I love the way they think; I love the way they react to things,” she told the Latino millennials’ culture magazine Remezcla. “I think we need to be open to contemporary times, and this is why it is important to collaborate, because in Mexico things are different than in the United States.”

Guerra’s appointment was part of a concerted effort at UCLA to explore the cultural dialogue between Los Angeles and Mexico. “This was an unparalleled opportunity for the UCLA community to become better acquainted with a truly transformative artist and activist,” said Vice Provost M. Belinda Tucker of the Institute of American Cultures at UCLA.

“Everyone realized they were in the presence of an extraordinary and beautiful soul,” said Tucker.

Guerra’s visit to campus was hosted by UCLA’s Institute of American Cultures, the Chicano Studies Research Center (CSRC), and the Department of Spanish and Portuguese. Additional support was provided by the César E. Chávez Center for Chicana and Chicano Studies, the Herb Alpert School of Music, the Center for the Study of Women and the Division of the Humanities.

“The CSRC was eager to sponsor Guerra’s visit as part of its mission to make Chicana/o and Latina/o culture relevant to students, faculty and staff, and foster connections between L.A. and Mexico,” said Charlene Villaseñor Black, professor of art history and acting director of the center.